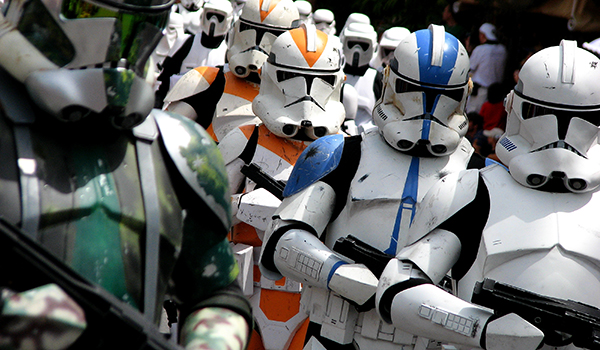 I don’t want to be “that guy,” but we need to talk about “Star Wars,” race, class, gender, and sexuality today. Apologies in advance.

In particular, we need to talk about who gets to be in “Star Wars,” who gets to make this decision, and what happens when nerd culture is removed from the vestiges of historically primarily white, male space.

If you avoided the spew of hate that was #BoycottStarWarsVII on Monday, then let me briefly fill you in:

On Monday, Oct. 19, a handful of tweets surfaced accusing the new Star Wars film of advancing an “anti-white propaganda.”

The tweets ranged from racist to very racist:

And yes, #BoycottStarWarsVII is also populated with pointed and humorous responses back to the original Tweets. But, the entire ecosystem of racist rhetoric and response is part of a larger conversation around ownership, fandom, and privilege.

But, here’s the thing, all of this was done — not as a racist crusade — but for the lullz.

In the past two days, much has been made of the fact that the initial #BoycottStarWarsVII hashtag was a deliberate (and successful) attempt to rile up folks outraged by ludicrous tweets. Yes, this was a highly successful act of trolling a lot of people. Even the Daily Show picked up on the discussion on Tuesday night.

The problem is that dismissing the hashtag as merely trolling and not as racism in and of itself is problematic. Yes, the history of trolling is one where hate speech is utilized for purposefully angering an audience.

At the same time, #BoycottStarWarsVII is so successful because it follows an ongoing debate about the viability of a black StormTrooper, a topic that’s been argued and parodied on Twitter since last year via the hashtag #BlackStormTrooper.

The recent act of trolling is the crest of a larger wave of debate about what “Star Wars” is supposed to look like.

On Monday, at the same time that #BoycottStarWarsVII was in full swing, I was discussing educational policy with my teaching methods class at Colorado State. Describing how policy makers and administrators will constantly be in flux, I explained that teachers are one of the few constants within schools and the education system; as part of a different nerdy subculture, I invoked the words of A Tribe Called Quest:

You could find the Abstract listening to hip-hop,
My pops used to say, it reminded him of bebop
I said, “Well daddy don’t you know that things go in cycles?”

We can see the racist responses to “Star Wars” and existence of a black StormTrooper as following on the heels of anger that the Human Torch was black in the latest Fantastic Four film, that Annie was black in the 2014 reboot, and that Rue was black in the “Hunger Games” even when the original book described her as having “dark brown skin.” Women, too, don’t fare any better when it comes to these responses as seen when the cast of the new “Ghostbusters” film was unveiled earlier this year.

The reason the #BoycottStarWarsVII discussion bothers me is because it is the same argument we have been engaged in for years. When historically marginalized individuals are given a spotlight that has been traditionally reserved for white, heterosexual men, a digital shitstorm ensues. These are usually supported by arguments about why the titular character shouldn’t be black. Or female. Or gay. And, to be honest, these tend to come across as nerdy posturing that presents in-universe canon as rationale for an oppressive get-off-my-lawn complaint.

Why this is about more than a Galaxy Far, Far Away

First, let’s get his out of the way:

Here’s the cool thing about fantasy, sci-fi, space operas, and all of the genre-heavy niche spaces of the make believe: anyone can be a participant within these spaces. “Race” is elevated far beyond simple categorizations based on skin pigmentation (i.e. see Chewbacca, Ewoks, and those creepy screeching Tusken Raiders). One of the reasons I’ve been researching role-playing games is because of their potential for inclusiveness. All genders, sexualities, and races are actively encouraged within the games I’ve been observing, creating spaces that can feel liberatory in ways the “real” world and the Internet often do not.

If advance ticket sales are any indication, it doesn’t seem like #BoycottStarWarsVII is going to make much of a dent in the all-but-assured financial success of the film. And, that’s not what I worry about.

But all is not well in the land of Tatooine. Over the summer, the first official new novel in the “Star Wars” canon, “Aftermath,” was published. (Note: the role of “canon” in the world of a post-Disney-owned “Star Wars” universe is a hugely contentious issue that I’m refraining from diving into.) The day of the book’s release, it’s Amazon page was flooded with one-star reviews, many of which dealt with the fact that a new “Star Wars” protagonist is gay. Responding to this on his blog, “Aftermath” writer Chuck Wendig writes:

And if you’re upset because I put gay characters and a gay protagonist in the book, I got nothing for you.… You’re not the Rebel Alliance. You’re not the good guys. You’re the f-ing Empire, man. You’re the … oppressive, totalitarian Empire. If you can imagine a world where Luke Skywalker would be irritated that there were gay people around him, you completely missed the point of Star Wars.

Look, people get mad on the Internet. I get it. All of this digital “stuff” gives us new ways to communicate and express ourselves. The lessons here illustrate how young people need to read and engage in the same kind of critical media literacy that Jeff Share and I discussed last month. Likewise, if schools are not the place to analyze and critique the role of digital discourse, then what is? Students need to be able to challenge white privilege, heteronormativity, and patriarchy continually. As adults working with young people, we must safely steward the critical conversations about marginalized representation and oppressive language in online spaces. Our students’ identities #matter and we must look across online social movements (trolling not withheld) for opportunities for critical dialogue.