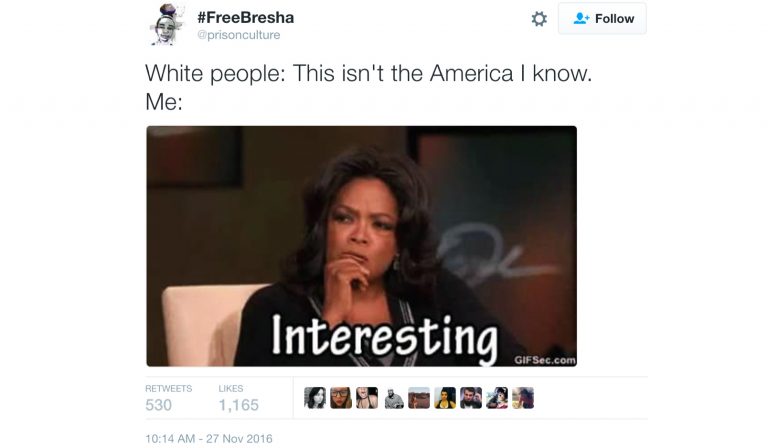 In the wake of last month’s election, many Americans of all backgrounds are fearful about the direction in which the U.S. will be heading under President-elect Trump in areas ranging from education and healthcare to immigration and LGBTQ rights. This fear is accompanied by shock among some about the ability of so many of this country’s voters to explicitly or implicitly support xenophobia, racism, and misogyny.

But, to many members of underprivileged communities whose histories are marked by oppression and marginalization, shock is the province of the (racially) privileged who are having their vision of America and the American Dream shaken for the first time. Consider the tweet above — it indicates a grim recognition rather than any surprise.

This is the foundation of the [American] Dream — its adherents must not just believe in it but believe that it is just, believe that their possession of the Dream is the natural result of grit, honor, and good works. There is some passing acknowledgement of the bad old days, which, by the way, were not so bad as to have any ongoing effect on our present. The mettle that it takes to look away from the horror of our prison system, from police forces transformed into armies, from the long war against the black body, is not forged overnight. This is the practiced habit of jabbing out one’s eyes and forgetting the work of one’s hands. To acknowledge these horrors means turning away from the brightly rendered version of your country as it has always declared itself and turning toward something murkier and unknown. It is still too difficult for most Americans to do this.

In my last blog post, I suggested that civic education in this country more often operates from the “brightly rendered” vision of America than the “murkier and unknown” vision that Coates describes and, as such, validates the experiences of the privileged rather than the marginalized. I go on to suggest that it is time for the field to move past the ideas of civic participation and engagement and toward a paradigm of civic interrogation and innovation in order to amplify the critical civic practices in which many young people from communities of color already engage.

I have done a great deal of writing (on this site and elsewhere) about youth participatory action research (YPAR) as a model of civic interrogation/innovation because of its reversal of dominant ideas of who can create knowledge and what forms of knowledge production are valued as sources of social action and change. One practice that is linked in many ways to YPAR and that has similar potential for critical civic education is PhotoVoice.

PhotoVoice is a practice that is well established in the field of public health (and emerging across many educational spaces) that encourages members of marginalized communities to take and discuss photographs in order to (re)claim their voices, foster empowerment, and spark dialogue and action about issues of social concern. Through delving into “murky” issues, this practice finds beauty and power.

The Las Fotos Project is a nonprofit organization in Los Angeles, California that engages teenage girls in photoVoice. I’ve been fortunate enough to observe the ways in which the young women and mentors in this program use photography and multimedia projects to counter deficit perceptions of their communities and highlight neighborhood organizing efforts.

Regina, a 10th-grader in Las Fotos’ Digital Promotoras program, explained to me how being encouraged to explore “murky” issues through photography inspired rather than discouraged her as a civic agent:

In a lot of other programs, it’s like you have to stay away from certain topics. In here, they value everyone’s experience and everyone’s story. It doesn’t cover up the reality of things — it just makes us all realize what we’re going through in the community. It encourages us to make change.

This trust did more to help Regina see herself as a leader than many programs that say they are committed to youth leadership; as she told me, “We’re not told when we get here that, ‘Oh, you’re going to be a leader.’ It’s kind of like you just act on it. It just comes naturally because of the way the program works.”

And engaging in photography and multimedia turned out to be an especially powerful way for Regina to see and share the good in her community. She explains:

I changed my perspective about some things. Like maybe I thought my community was ugly and then, with photography, I thought that even the ugly parts could be beautiful. I can express that to the world. Before I thought that what we were offered was enough. When you realize that it’s actually not and you’re able to show people that through your work, that’s eye-opening.

In future posts, I plan to highlight more practices that represent civic innovation in action. You can check out Regina’s entire multimedia presentation here.