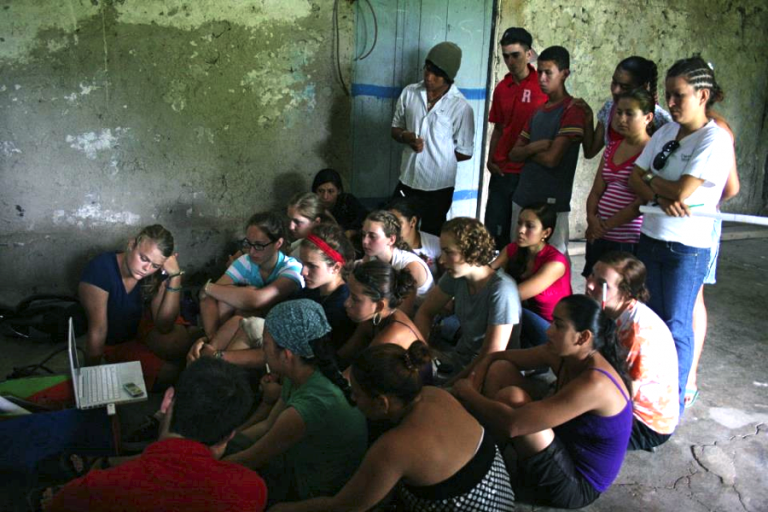 In recent years, international development organizations have started incorporating digital media programming in an effort to merge storytelling and popular media into civic engagement and to bring young people together across national and cultural differences. In 2009, AMIGOS de las Americas partnered with a major development agency to carry out youth media and youth arts programs in Nicaragua. As the program’s director, Chelsey Hauge, a doctoral candidate in Language and Literacy Education at the University of British Columbia, spent three years studying young people’s relationships with media production, community development, and civic engagement. She was especially interested in the ways young people become invested in political movement and in how using media in civic engagement education shapes youths’ experiences as local and global citizens.

During her time with the program, Hauge discovered that young people’s personal experiences were often leveraged as storytelling devices to bring about social change or to spark civic engagement in their communities. Hauge presented her findings at the 2012 DML Summer Research Associates Institute.

In the video below, Hauge describes how the young people immersed in the programs used media production as a means to deeply explore meaning and representation. Hauge noted that gender emerged as a popular topic among the youth. Development agencies are heavily focused on improving girls’ access to resources, and many youth in the program produced videos about girls and gender, reflecting the interest in shifting gender culture in their communities. While there has been much progress in closing these gender gaps, she warns that the excitement over the progress being made around girls can obscure the power dynamics between youth and communities and development and media organizations. Hauge also considers the ideology of cosmopolitanism as a way of dealing with some of these major issues surrounding difference and marginalization that are impacting people around the world.

Below are a few noteworthy excerpts, but during the entire video, Hauge closely examines the scaffolding that is needed in literacy based programs in order for young people to develop a rich set of higher-order skills that enable them to be critical of the media that frame their everyday lives.

I am really interested in how those youth negotiate meaning, how they are going to tell stories, what stories they tell, what comes out of the relationships where youth are speaking different languages and come from different backgrounds, and how they negotiate and use that to effect change and progress in the world.

I am really passionate about media and media production. I think it’s really important for young people to have media skills, especially right now when so many of the publics that they can participate in are online or are mediated in some way.

There’s a big call for that among educational scholars, and it seems that the organizational parallel or the practice parallel to that is these organizations that are doing these programs that bring young people together across difference.