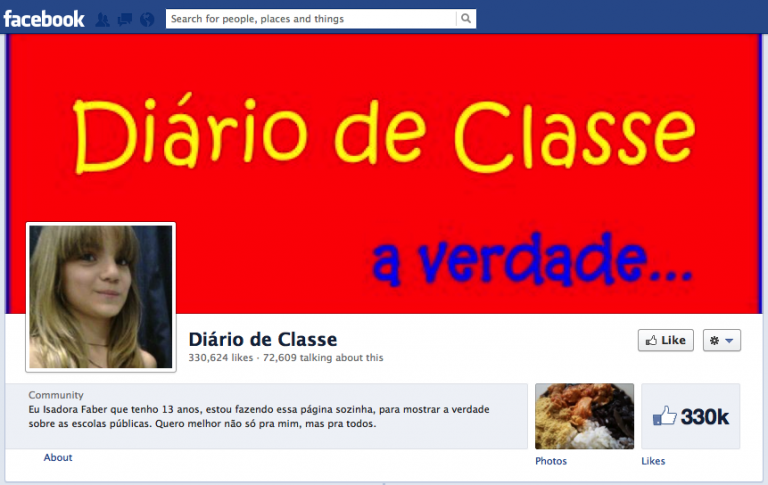 Last April, 9-year-old Martha Payne created a blog to discuss the quality of the food served in her school called “Never Seconds.” In the blog, she discussed the quality (and quantity) of food available in her school using terms such as “food-o-meter” and “healthness.” The blog become an international hit and attracted the attention of several celebrities, including Jamie Oliver. Martha’s blog also increased awareness about the quality and quantity of food served in the UK’s (and the world’s) public schools, leading to several changes, including in Martha’s school.

Inspired by Martha Payne’s case, Isadora Faber, a 13-year-old Brazilian student from Florianopolis, started a Facebook page to discuss her public school’s shortcomings. She created the page, called “Diario de Class” in July, saying she wanted a “better school” not only for her but for everyone.

On the Facebook page, Isadora talks about daily life at the school and complains about the school’s problems. However, in contrast to Martha’s school, Isadora’s school has more profound problems, such as lack of infrastructure and a shortage of teachers. In one post she showed a picture of the remains of her classroom’s electric fan where there are exposed wires clearly visible asking, “Isn’t this dangerous?” In another, she posted a picture of the girls’ bathroom broken toilet door without its lock, and in its place only a hole.

The page quickly became famous, not only because it showed the poor state of Isadora’s school, but because it was a symbol of the poor state of Brazilian public schools in general. Isadora’s page drew thousands of visitors and quickly went viral. She received massive media attention, which prompted “emergency reforms” in her school by the state of Santa Catarina. She then started to post about the reforms and the new items the school received, but she continued to document other (yet unresolved) problems.

But her posts and actions were not without criticism. “They [the teachers and staff of the school] always ask me to delete the page, but I’m not going to. […] I just want to have a quality education and this is what motivates me,” she explained in an interview in August. Also, in several posts, she talked about being bullied by teachers, colleagues and the staff of the school because of her page. Prompted by the criticism, Isadora also posted several videos where she explained her rationale for creating the page and catalogued the positive changes it brought to the school. Still, two weeks ago, she had an encounter with the police to answer a complaint from a teacher who claimed she was being maligned by Isadora’s posts.

Isadora has widespread support from the internet (the page has more than 330,000 likes on Facebook) and from her family. A recent post on her page is a public statement from her family supporting her and the social media effort. In several interviews, her mother said she explained to Isadora the possible reprisals she would have to deal with, but she told her mother she was committed to her original purpose. She has now become the inspiration for numerous other Facebook projects highlighting the quality of Brazilian public schools.

All of these Facebook pages discuss the same kinds of problems Isadora’s school has. They are all created by students to shed light on the plight of their schools, focusing mostly on poor infrastructure and the lack of teachers (This is a problem for most public schools in Brazil; schools don’t have enough teachers and rely on the government to contract new ones). Based on Isadora’s success, these youth hope their complaints will be heard, shared via social networks, and then addressed and resolved.

Long before Isadora’s campaign, the poor state of public schools and the lack of government attention was a chronic social ill in Brazil. However, because students now have cell phones, cameras and the internet, they are recording, documenting, and publishing these issues for everyone to see. Because of the efforts of these students, for the first time, there is growing understanding that, more than being isolated cases at individual schools, there is a clear picture of the true state of public education in Brazil and the need for change.

You can learn more about Isadora’s story here and here.