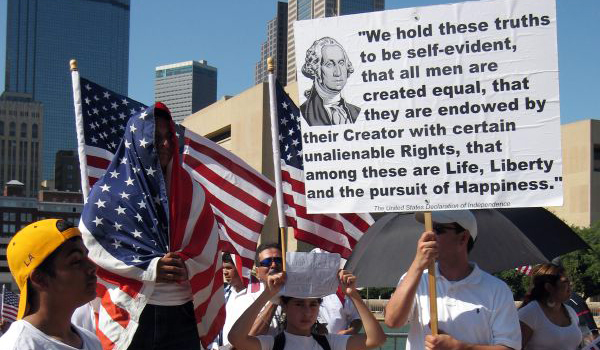 The actions that Donald Trump has taken during the first weeks of his presidency have struck many Americans as shockingly antithetical to the values upon which our country was purportedly founded. Posts on Twitter note the terrible irony of refugees and immigrants being detained at our nation’s airports while our Statue of Liberty beckons the world to “give us your huddled masses yearning to breathe free.” Those outraged at the prospect of religious tests to enter the country ask, “didn’t we already find it self-evident that all men are created equal?”

Statue of Liberty to huddled masses yearning to be free: I meant Muslims too. #MuslimBan ? pic.twitter.com/wFQmrfLfbO

This question reminded me of something that Barack Obama said during his presidential farewell address, that stirring exhortation to democratic action that now feels like it was delivered so impossibly long ago. He reminded us, his fellow citizens, that while rights may be self-evident, they are not “self-executing” — that only “we, the people, through the instrument of our democracy, can form a more perfect union.”

As much as it seems to those of us who equate the quest for a more perfect union with equity, justice, and inclusion that the current president is taking us in the opposite direction of perfection, how heartening it has been to see people rising to execute their democratic rights and defend those under attack. From women’s marches and airport protests to rogue Twitter campaigns and donations to the American Civil Liberties Union, increasing numbers of folks are exchanging complacency for action.

I share the concerns of members of marginalized communities who know that our country has never lived up to its lofty ideals (remember Langston Hughes’ line: “America never was America to me”) and who wonder where the newly outraged were during their lengthy and continuous struggles for justice. I also am hopeful that perhaps more people are waking up to Obama’s exhortation that “[Democracy] needs you. Not just when there’s an election, not just when your own narrow interest is at stake, but over the full span of a lifetime.”

And as an educator, I know that public schools have long been enlisted as primary drivers of efforts to lay the groundwork for exactly this type of civic action in young people — not telling them what to care about, but how to get involved in what they do care about. Countless schools mention the preparation of good citizens in their mission statements, every state includes civics/social studies courses in their schools’ graduation requirements, and many campuses require students to engage in some form of community service. The federal government has been supportive of these efforts to link education and civic action — consider Americorps and the National and Community Service Act — in a signal of the enduring link between education and democratic citizenship.

While my professional and scholarly work stands on the shoulders of critical theorists who question if service learning does enough to help students understand the root causes of the challenges they are attempting to address through their service and calls for more explicitly political and justice-oriented views of civic identity and civic education, I at least thought that the idea of schools encouraging young people to be actively engaged in public life at any level was something that citizens of all political orientations could agree upon within a democratic society.

This is why I was so appalled to read the recent report released by the conservative National Association of Scholars that not only condemns service learning (and civic education generally) as a left-wing conspiracy aimed at inculcating unsuspecting students into “radical” politics — in the process calling out and attempting to intimidate particular university programs and associated faculty members — but also seeks to promote a narrow, individualistic view of citizenship that is appropriate to denizens of dictatorships rather than democracies.

The report’s author, David Randall, rambles and digresses for over 300 pages, attempting to reduce complex and interrelated democratic values of liberty and democracy into zero-sum competing binaries. On the one hand, he acknowledges that learning through engagement in shared practice is a foundational educational practice, and that service learning programs and other civic engagement initiatives that get young people involved in participatory democratic action hearken back to the principles of public education that our Founding Fathers supported in which “civics permeated education as a whole.” Yet in the same breath, he dismisses these programs because he doesn’t like the “content” that they promote, claiming that what he deems the “New Civics” “substitutes a left-partisan political program for reverence and love for America” (p. 56).

I almost don’t know where to start deconstructing the short-sightedness of this analysis. First, the programs that Randall is calling out don’t force students to take on partisan political views — if he wants to conflate engagement with communities facing enduring challenges of poverty, racism, and immigration with partisanship, that is only because his own political views involve ignoring or marginalizing entire groups of citizens and their concerns. Service learning programs invite young people to step outside of their own perspectives and see the world through the eyes of people unlike themselves — if that experience influences how they choose to vote or engage in the political process, that is their choice, not indoctrination. The role of education is to help students wrestle with the greatest social challenges of the day through particular academic disciplines, not to pretend that these disciplines exist in a vacuum.

Second, Randall is making a false and extremely dangerous correlation that people of a particular political persuasion (i.e. the left) do not love America, as if patriotism cannot co-exist with dissent and protest. The idea that the goal of civics must be to inculcate blind patriotism without any critique of the ways America comes up short in realizing its ambitions valorizes the experiences of a subset of citizens while minimizing the experiences of Americans who have suffered oppression. It sows division by implying that some citizens are more American than others — the exact kind of Trumpian rhetoric that is playing out right now.

Third, on a larger scale, Randall assumes that politics can somehow be entirely divorced from civic education — another binary that does not capture the complexity of civic identity and civic action in practice in the real world. Any educator who claims to be apolitical is buying into a particular political view of education – and doing so in a much shadier manner than those who interrogate their views and the kinds of content, views, and instructional experiences they are offering their students.

Another issue that should concern the DML community is the way that Randall dismisses 21st century digital media skills as tools “used to forward the progressive agenda.” He recycles the tired conservative argument that civic education should be about acquiring a set body of knowledge about the three branches of government rather than applying any of that knowledge to action and claims that skills-based education is an excuse for educators “not teaching any body of knowledge” (p. 26).

If Randall’s ideas about civic education were put into practice, none of the civic action that has been emerging over the past few months would be possible. Perhaps that is exactly his point — to keep large swaths of the citizenry from raising their voices and instead encouraging them to remain docile and trust in those with the specialized knowledge to decide in their best interests.

It is the responsibility of educators everywhere to take a stand regarding the kinds of citizens they want their students to become in an increasingly troubling 21st century. I believe that Randall’s rhetoric is dangerous, reactionary, and completely antithetical to the struggle for a more perfect union. I’m going to continue discussing these civic education issues throughout this administration, and I encourage you to do so as well. Let’s start this conversation.