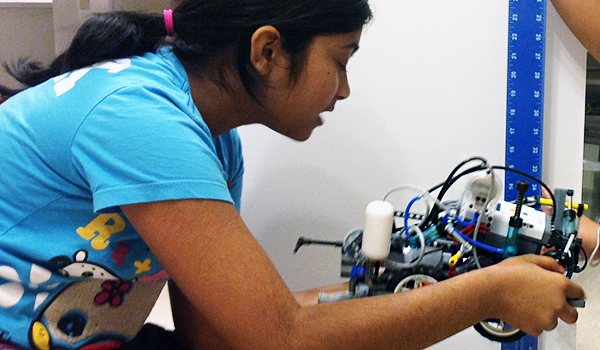 The title of the article from The Atlantic stopped me in my tracks as I was scrolling through my Twitter feed: “Why I am Not a Maker.”

I was perplexed. Why would someone not want to engage in the fun, creativity, and imagination of the maker movement? Within the connected learning and DML communities (at least my involvement in them), making has always had a positive connotation, bringing with it the possibility of turning teaching and learning toward a focus on producing new things/ideas instead of simply consuming the status quo.

But, perhaps I was ignorant to some problematic aspects of making. So, I decided to engage with Debbie Chachra’s opinions based on her experience as an associate professor at Olin College of Engineering.

Chachra focuses her criticism of the maker label on what she calls “technology culture.” While she never provides an exact definition of what this culture includes (and excludes), I assume from her references to Silicon Valley, coders, and programmers that she is thinking mostly about tech start-up culture. Since I am not a member of this culture, I don’t presume to speak to whether her criticism of it is valid; however, Chachra also identifies herself as an educator and positions education as opposed to (and less than) the maker culture.

Since I do identify with the educator culture, I became interested in some responses to Chachra’s claims as they might relate to the K-16 educational space. I should note that these are some initial developing ideas, and I am eager for this article to spark an important dialogue within the DML community about how inclusive the term maker really is out in the field.

1. Chachra’s argument: “I’m uncomfortable with any culture that encourages you take on an entire identity, rather than to express a facet of your own identity (‘maker,’ rather than ‘someone who makes things’).”

My response: In general, I don’t find this argument compelling because it is largely semantic. Chachra is suggesting that the “er” in the term maker makes it an all-encompassing identity that does not permit for additional facets of selfhood or expression, whereas calling yourself “someone who makes things” somehow permits more flexibility. I don’t think that taking on the identity of a being a maker excludes you from being a multitude of other things — a consumer, for example, or a caretaker, which is the identity that Chachra is most invested in.

2. Chachra’s argument: “There’s a widespread idea that ‘people who make things are simply different [read: better] than those who don’t.’ ”

My response: I’m not sure what evidence Chachra is using to make this claim. According to Forbes Magazine, the three most respected professions in the country are doctors, military officers, and firefighters — none of which involve making in the traditional sense of producing objects. If she is referring to prestige in terms of income and impact on popular culture, perhaps I could see more of her point, but she does not provide much besides her own opinion to go on here.

She does mention later in the article that the maker movement is evolving from “the corporate to the individual,” but she maintains that within this culture, “artifacts are important, and people are not.” I can definitely argue that making, as it has been envisioned in educational spaces like the National Writing Project, flips this logic and places learners at the center of the making experience, giving them the opportunity to see themselves as creators of knowledge and voice (back to the identity stuff above) and highlighting the messy but ultimately rewarding process of learning as the real reward.

3. Chachra’s argument: “Almost all the artifacts that we value as a society were made by or at the order of men. But behind every one is an invisible infrastructure of labor — primarily caregiving, in its various aspects — that is mostly performed by women.”

My response: This is the one claim that Chachra makes that really resonates with me — one that applies not only to Silicon Valley (see the New York Times article, “Silicon Valley’s Diversity Problem”) but to the educational sphere as well, where women dominate the teaching force but are often supervised by men at the school, district, state, and national level.

I do offer the idea, however, that as the teaching force warms to the idea of making as a valued educational practice, that women could begin to lead the conversation about the symbiotic, not oppositional, relationship between making and caregiving, between making and educating.

4. Chachra’s argument: “I am not a maker. In a framing and value system [that] is about creating artifacts, specifically ones you can sell, I am a less valuable human. As an educator, the work I do is superficially the same, year on year. That’s because all of the actual change, the actual effects, are at the interface between me as an educator, my students, and the learning experiences I design for them.”

My response: Why should we perpetuate the dichotomy between educating (teaching/learning) and making by completely rejecting the maker identity altogether? Couldn’t we instead proudly embrace our multiple identities and work to draw out the connections between them — the ways that we cannot fully realize our potential as makers until we work on cultivating the crucial caring virtues of listening, empathizing, and loving?

During our recent talk at Colorado State University about critical literacy (documented by fellow DML blogger Antero Garcia here, Danielle Filipiak and I explored the delicate balance between encouraging student agency and stepping back to hone critical listening skills to really hear what your students are trying to tell you about themselves.

I think that there is much more to be explored here about the toolkit of knowledge, skills, and competencies that can be included in the maker identity, and I am hopeful that instead of rejecting the term, as Chachra does, educators can instead re-imagine and transform it to support imaginative young people.