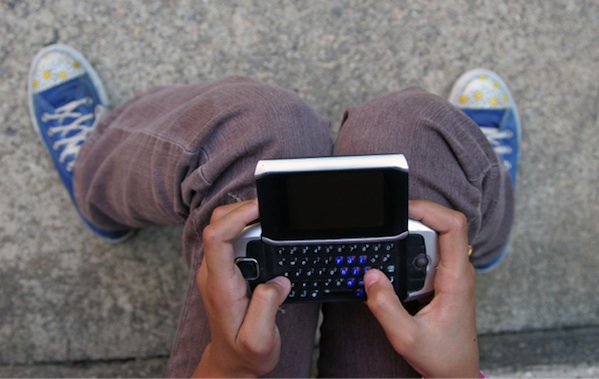 In a cartoon depicting the evolution of Good Samaritanism in the digital age, a man walks by a homeless person lying on the street and does nothing. In the next frame, he is at his computer — “What’s this?!! Sally needs a bag of fertilizer for her Farmville farm? I better get right on it!”

Many are struck by the amount of time some people spend in online communities — and concerns have been raised that our attention to virtual communities may be distracting us from the tangible needs of those around us.

Frankly, when it comes to youth civic and political engagement, there is reason for concern. Just 23 percent of 18-29-year-olds voted in the 2010 election. And even in 2008, the recent high point of youth engagement, 55 percent of those 18-29 were judged both civically and politically disengaged on the nationally representative Civic Health of America study. 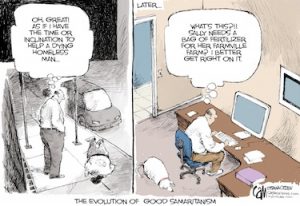 Is time spent online part of the problem? During the 2008 campaign, many talked about how the Internet was creating digital citizens and expanding youth engagement. Now, we’re back to talking about youth “slacktivists” whose “activism” consists of “friending” a cause on Facebook. Many also worry that the ability to choose our online communities leads youth and adults into echo chambers where they hear only those views they agree with or interact in disrespectful ways with those who hold different perspectives.

For the past several years, my colleagues and I have been examining these issues. In the first large longitudinal study of youth with this focus, we surveyed more than 2,500 high school students from 19 different districts in California and we were able to follow more than 400 for up to three and half years. We looked at how their online activities related to their civic engagement. We were able to control for their initial levels of engagement — giving us a better sense of digital media’s actual influence.

What we found calls conventional wisdom into question:

Online communities are not the problem — in fact, they may be part of the solution. Many worry that youth who spend significant time on fan sites or in online communities tied to hobbies, sports or other interests will become socially isolated — or, as in the digital age Good Samaritanism cartoon, they may focus more on needs of those in virtual communities than on the needs of those right next to them. We found the opposite to be true. Controlling for their prior level of engagement with civic life, when youth were highly involved in interest-driven online communities they increased their volunteer and charity work in the offline world and increased their work with others on community issues. In addition, online communities are generally more politically diverse than offline neighborhoods. We found that participation in these communities increased youth’s overall exposure to divergent views on societal issues.

More youth are in empty chambers than echo chambers: Contrary to popular belief, when online, it turns out that few individuals are only exposed to perspectives with which they agree. We found that youth tend either to see many different perspectives or none. Few youth, 5 percent, reported exposure only to political views with which they agree. But, 34 percent said that they didn’t encounter any perspectives at all. Online or not, many youth are disengaged.

Digital Media Literacy education can help. Many think of youth as knowing all they need to know about the Internet and that adults have little or no role to play. But youth are not all digital natives. Our surveys indicated that digital media literacy education dramatically increased students’ exposure to diverse perspectives and boosted the likelihood of youth online engagement with civic and political issues. Students who were required by their teachers to go online and get information about political issues or to find different points of view became more likely to use the Internet in these ways during their discretionary time. By supporting digital media literacy education at home, in school, and in after school programs, we can foster more online engagement with civic and political life and greater exposure to a wide range of perspectives.

These findings are consistent with what Henry Jenkins, Sangita Shresthova and colleagues have found in their research. While online, many youth learn skills, find out about issues, become part of vibrant and diverse social networks, and come to recognize the power of collective action. Some have even tapped the power of social networks and youth’s nonpolitical online interests in ways that lead directly to action. The Harry Potter Alliance (HPA), for example, has connected to more than 100,000 fans and has mobilized many of these fans to form a kind of “Dumbledore’s Army” for the real world that addresses issues ranging from poverty, to human rights, to responses to natural disasters. As one youth explained, “(Before joining HPA), I had absolutely no volunteer time for anything…I didn’t care about social activism…But when it came to Harry Potter…I was like, well, I like all these people I met online through Harry Potter, it would be cool help the world this way…”

Of course, not all online activities produce benefits. We found that while being part of online communities tied to specific interests was strongly related to civic engagement, socializing with friends on Facebook was not.

And this finding highlights a big problem with the way we often talk about the impact of media practices. Lumping all activities together, we ask: How much time do kids spend with media? The answer is shocking — something close to 7.5 hours a day if you include T.V. — but that’s the wrong question. We need to focus on what are youth doing when they engage with media. We should be asking: How can we help youth make the most of digital opportunities?

Fortunately, some reformers are beginning to test out varied answers to this question. For example, a team headed by Justice Sandra Day O’Connor has created iCivics, an online game designed to foster civic understanding and engagement. Taking a different tact, groups like Common Sense Media have developed digital literacy and citizenship curriculum to support the consumption and production of online content. Others have created digital resources like factcheck.org or platforms like the Black Youth Project, for youth to create, share perspectives, and access information about the topics that matter to them. In addition, out-of-school programs like YOUmedia enable youth to pursue their passions in a media rich environment where they create, share, learn, and teach. The societal issues youth care about are often front and center in this effort.

In short, the virtual world can be good for the “real” one. There are forms of online activity that can give youth civic and political engagement a much needed boost. We need to fully tap this potential.