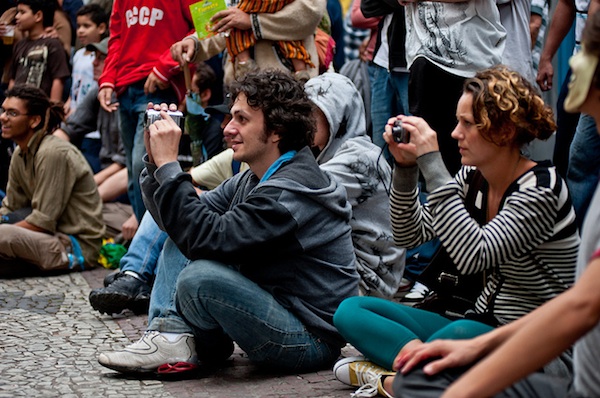 Young people from many countries in Latin America have organized themselves and occupied public places just like their counterparts around the globe.  While some protesters are still camped, others are not.  In both instances, the spread of these ideas through digital media and social media has been impressive.  In Rio de Janeiro, a nonviolent occupation is happening in Cinelandia Square downtown.  More than 100 tents have been pitched and protesters have decorated them with placards opposing capitalism, consumerism and social inequality.

The #OcupaRio movement has an ambitious agenda.  It is taking up specific local issues.  One example is the controversial Monte Belo Dam project, a hydroelectric project that is going to be built in Amazonia.  Another issue is the forced eviction of residents from the iconic favelas in Rio in advance of soccer’s 2014 World Cup, which will be held in Rio.  The #OcupaRio is also seeking to raise awareness around global issues like poverty, environmental degradation, and class-related injustice. 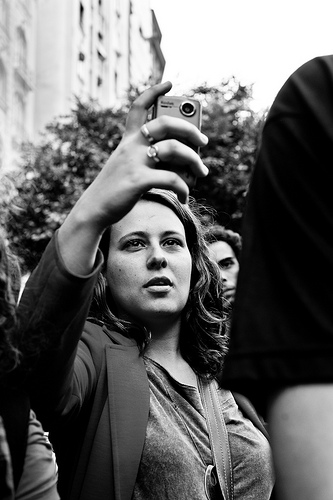 The movement has a website displaying a calendar of all of the debates, workshops and performances happening in the square.  Interestingly, the movement is urging people to “sai do sofá e vem pra cá” (“get out of the sofa and come here”).  This is a reference to criticism that many of the so-called social media revolutions have been “sofa protests.”  A similar demonstration — #ocupasampa — is unfolding downtown in Brazil’s largest city, Sao Paulo, where more than 400 people are camped.  There have been reports of occupations in other major cities, such as Salvador, where protesters are camped in Ondina Beach.  More details about the Occupy movements in Brazil can be found here.

In Mexico, similar protests and nonviolent occupations are taking place, especially in Mexico City.  The center of the protest is the Monumento a la Revolucion, a historic public square.  There is also a group camped in front of the building of the Mexican Stock Market (Bolsa Mexicana de Valores).  The Occupy Movement has also spread to Tijuana, where protesters were involved in conflicts with the authorities.  While the agenda in Occupy Tijuana is similar to the global protests, it is also taking on regional issues, in this case the escalating violence in the drug trafficking wars, which has recently targeted bloggers and social media activists.  #OcupaMexico is also leveraging the web to organize its efforts and to spread its agenda.

Argentina is an especially intriguing place for the Occupy movement because the country suffered widescale economic ruin in 2001.  Some observers have likened the forces that drove Argentina’s crisis to the current situation in the US.  The main Occupy website in Argentina is here.  In Buenos Aires, the capitol, protesters camped in front of the Spanish Embassy for several days.  Several marches and protests are being organized in Buenos Aires and other cities.  November 11 (11.11.11) was a key date for Latin America and beyond where Occupy protesters marched in several countries including Venezuela, Chile, and Argentina.

While it meets increasing opposition in American cities, the Occupy movement continues to spread in Latin America through social media and despite the lack of coverage in mainstream media.  Each day, more and more “occupy groups” appear online and try to organize people on Facebook.  Besides spreading their agenda — both global and local — the groups are focusing on holding debates and workshops after which people are called upon to act.