It’s 7 a.m. and a high school student wakes up on a week day. Instead of getting ready to take the bus to school, he is already there with his classmates. This is a common scene at Brazilian public schools. Students have taken over their schools as part of the protest movement called Ocupa Escola (Occupy School in English). The movement launched at the end of 2015 when the government of the State of São Paulo decided to close 93 schools and reallocate more than 311,000 students. At that moment, high school students started taking over their own schools and organizing protests to fight for their rights. After a month of occupations and a big event supported by hundreds of volunteer artists, photographers and media producers, Gov. Geraldo Alckmin decided to suspend the educational reformulation in that state.

Later, in 2016, by not taking educator’s demands seriously, at least two federal states were facing a general teachers strike until they had attention from the governors. By understanding and supporting their teachers’ decision, the students started occupying their schools when they were not protesting in the streets. The occupation movement has expanded to federal schools, universities and other government institutions. Ocupa Escola got stronger in the second semester of 2016 after the impeachment of Dilma Rousseff and the beginning of the current president Michel Temer’s political decisions for the nation. The new government actions that increased the protest were a proposed constitutional amendment — PEC 55 — that freezes the limit for public investments in areas like education and health for two decades, the provisory measure for high school that reforms completely the secondary education system without having it discussed by specialists and the law project called “Escola sem Partido,” or School without Party, that aims to avoid political discussions in educational environments.

While the educational protests have also launched strikes of college professors and public servers, high school students call special attention when it comes to the way they’re taking over their own educational environment. Brazilian youth are themselves trying to improve their education however they can, from making a deep cleaning of the classrooms to having the most different types of lessons from people outside the school who donate time and good will to do it. The biggest #OcupaEscola in Brazil, located in the state of Paraná, has more than 800 occupied schools. 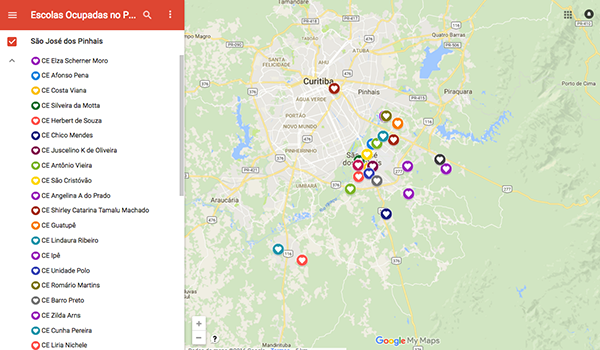 If you go to ocupaparana.org, you have access to a state map where the occupied state schools (Colégios Estaduais, or CE) are tagged. The map is part of the students’ strategy to ask for class donors who can subscribe to offer classes, workshops, talks, hands-on activities or any other collaboration. Also on the website, you can access the list of donations each school has received. There are more than 900 donations, including curriculum in math, foreign languages, physics, literature, health care, robotics, political science, anti-bullying, film production, astronomy, democracy and gender equality. 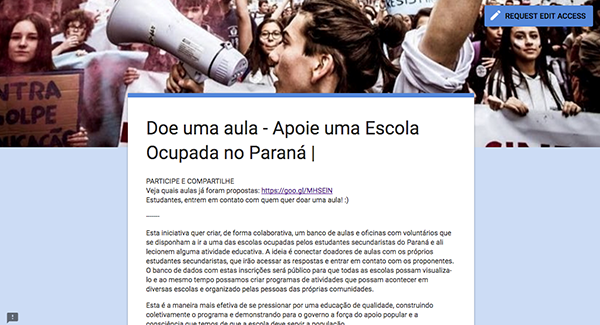 The donation system of classes is a participatory culture that might change the way students think about their own curriculum. As opposed to federal and private schools or universities that usually have more budget to implement modern education tools, the state schools are in poor condition and quite abandoned by the local governments, and teacher pay is low. Through the donated classes and the movement itself, teens are gaining access to information in a way that would be unthinkable under the old curriculum. Mauro Ramos, a teacher from the public school Colégio Félix da Cunha, in south Brazil, says that during the strike, his students had three main principles for the protest: information, conservation and recreation. “The students organized themselves to have at least one moment of discussion or class during each day of the occupation, as well as a moment to have fun such as playing sports, and also they promised to keep the school in perfect physical shape,” he said, adding that some parents and teachers provide security so students can spend the night at school.

The case of Felix da Cunha is no different from other schools that have a good dialogue between the youth and the institution administration. Although Ocupa Escola is a protest organized in a peaceful way, it’s not rare to hear critics, saying that the teacher strike and students occupation are useless. In response to the critics, a Paraná 16-year-old’s speech addressing her state Parliament went viral: “Who is school is for? It belongs to whom? It’s an insult to us, who are there, dedicating ourselves, looking for motivation every single day, being called indoctrinated. It’s an insult for us, students, as well it is for the teachers.”

The sense of belonging is one of the advantages of Ocupa Escola, that improves community engagement and gives youth a way to be heard by their government and society. Ana Júlia uses her discourse to represent the ones who are now getting involved in discussion and planning of a better education. “We know that we need high school reform. But, we need this reform to be studied, it needs to be made by education professionals,” she says, referring to the federal provisory measure proposed by Temer. By having the opportunity to learn differently from what the traditional and abandoned education was trying to teach, Brazilian youth who joined Ocupa Escola can learn civic engagement, political awareness, how to be part of an offline community, and, because of that, to collaborate with others in order to expand their knowledge about education be part of concrete accomplishments.

Ocupa Escola is allowing youth to connect with the informal education that shows up to be good to their professional and personal evolution. It shows informal learning happening inside school, completely inspired by improving formal education. The occupations are showing to be a fundamental stone in the construction of improved education.