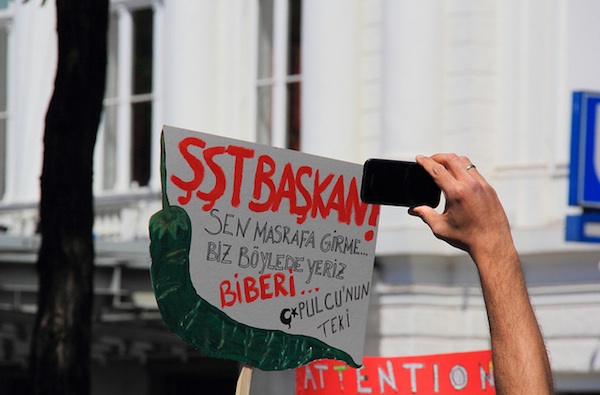 The Gezi protests took everyone, including the protesters themselves, by surprise. “This wasn’t what I had planned to do in June at all,” said a man in his early 30s to me as we sat in the small grassy area in front of his tent where he had been staying for more than a week. His wife nodded as she fiddled with her smartphone. I asked her what she was looking at. “Twitter,” she said, “I’m just getting the hang of it.”

The protesters in Gezi were also getting the hang of being tear-gassed – as we would be later that day. Over the last few years, watching online, I had seen innumerable protesters – from Occupy in New York or Oakland to Bahrain and Tahrir in Egypt – attacked with tear-gas. This time, I was the one tweeting about it, and the international fraternity of the tear-gassed responded with sympathy and advice.

While each movement in the wave of protests we have seen since 2011 has had its own characteristics, they also share many elements that feature in both their success and failure.

Unlike their western counterparts, Gezi protesters were not focused on austerity (although corruption came up often). This is because the AKP government has bucked global trends and actually expanded the reach of social services in Turkey during its 11-year reign. Although critics say this expansion often works as a form of indirect patronage, whereby taxpayer-financed services are presented as AKP largesse, Turkey is not Greece or Spain, and it’s certainly not dismantling its social services. This was not a typical Middle Eastern movement either: while growing authoritarianism is a concern, Turkey is not ruled by an unelected autocrat like Egypt’s former president Mubarak.

More than anything, the protesters in Gezi were yearning for those elusive institutions – an independent judiciary, the rule of law, a free and critical media, equal protection – that take centuries to develop, remain hard to define, and are never perfect anywhere, but in whose absence democracy is hollowed out.

“Erdoğan may have won an election,” I heard over and over again in Gezi Park, but “he rules like a king rather than a prime minister.” So it wasn’t a mere coincidence that the Gezi protests started over Erdogan’s plans to transform this rare bit of green in an overbuilt city into a replica of the Ottoman barracks that had once stood there – complete, he proposed, with luxury residences and a shopping mall. His ambitious, personalised agenda for what should have been a local matter symbolised his growing overreaching and the weakening of rule of law.

Plans for the shopping mall/barracks were perpetually in flux, apparently contingent on Erdoğan’s whims. The public were shown a cartoon animation of how great the new Taksim would look. Yet a leading figure from the neighbourhood organisation that had mounted significant court challenges told me that no detailed plans for transforming one of Istanbul’s most significant squares had been forthcoming, despite repeated attempts to obtain copies from the government.

In the preceding year, Erdoğan had issued proclamations on issues ranging from how many children women should have to the advisability of caesarean sections and abortion. The parliament had just passed a sweeping alcohol law that mixed some sensible regulations with other, more vague restrictions that seemingly outlawed events such as wine-tastings. For many in Gezi, it wasn’t the alcohol or the park as much as the feeling that a person and a political party – a popular one, many acknowledged – was ruling without checks and balances. Over the past few years, the judiciary has become increasingly tainted and almost all mass media have made accommodations with the Erdoğan government. Also, because of the peculiarities of the electoral system designed by the plotters of the 1980 military coup, the AKP’s representation in parliament is greater than its (already substantial) proportion of the vote. Under this coup-flavoured electoral system, which the AKP has refused to reform, parties with less than 10 per cent of the vote achieve no parliamentary representation. This electoral barrier has led to a fossilisation of Turkey’s incompetent and fractured opposition as new and potentially more effective challengers find it very difficult to build up support and make it into the system.

If there was a flashpoint for the Gezi anger, it was the media. Almost every mass-media outlet in Turkey is owned by the same large conglomerates that also do significant business with the government and vie for the lucrative urban renewal, energy and construction projects which have fueled Turkey’s economic growth. These outlets rarely publish anything critical of the government and have been known to come out with identical (government-friendly) headlines on certain critical days. The last newspaper to publish a story on economic corruption by the AKP was hit by a surprise, multi-billion US-dollar tax fine – which was later “forgiven” by the government after the paper moderated its coverage.

Hence, when the initial few dozen protesters trying to protect the trees in Gezi from demolition faced the bulldozers, pepper-spray, water cannons and tear-gas, they turned to Twitter rather than traditional media to get the word out. As the situation escalated, citizens who turned on their televisions to see the news about ongoing clashes in the middle of the central square of the most populous city in Turkey instead saw … penguin documentaries and cooking shows. Many protesters who ended up pitching their tents in Gezi came initially because they were struck by the contrast between numerous eye-witness accounts – accompanied by pictures, videos and live footage flowing into their computers and phones – and the extreme, blatant censorship by the country’s media channels. “It was like they were ridiculing us,” I heard repeatedly. “We hadn’t planned this, but when we saw this media censorship and police repression, we felt like we had to act.”

This ability to mount a significant protest without planning or organisation is both a potent source of strength and, frequently, the Achilles heel of social media-fueled movements. The internet’s ability to enable collective action without pre-existing infrastructure means movements can emerge without an organisational capacity or a collective leadership. However, this lack of this capacity often becomes a hindrance in the days after participants have been in the streets for a while. Many of the protesters I spoke with in Gezi did not know what their next step would be, how it would be organised, and what political steps would follow, if any. When the government forcibly dispersed the occupation a few days later, many protesters retired to neighbourhood parks. Here, fervent discussions continued, but still without any organisational structure capable of making decisions or mounting a political challenge. The AKP government, meanwhile, looked forward to the elections in 2014, when its superior organisation, resources and strategic savvy will almost certainly deliver it another electoral victory.

This article was first published in Juncture, a UK think-tank policy magazine, and can be accessed in its original form here.