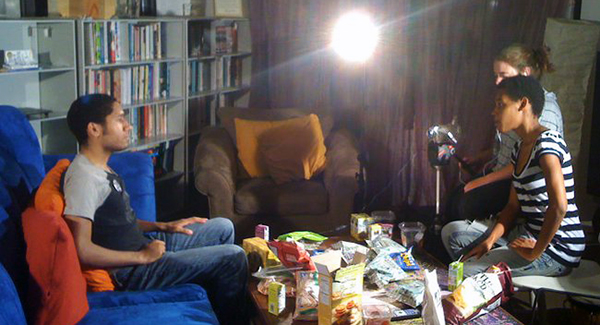 Youth media production is often seen as an admirable way to help underserved K-12 students find voices in their communities. With the advent of more accessible multimedia technologies and the means for sharing production practices on social media, traditional after-school programs with computer labs are changing — sometimes in response to the wishes and needs of young clients and sometimes in response to the agendas of donors.

A unique research partnership at the University of Washington Bothell in the Interdisciplinary Arts and Sciences division is examining how certain kinds of public messaging may be promoting particular generational narratives that can become counterproductive when young people aren’t the source of the ideas. Professors Lauren Berliner (Media & Communication and Cultural Studies) and Lauren Lichty (Community Psychology) sat down with DML Central to discuss best practices for running successful youth media production programs.

Berliner has directed two programs for teen video producers: Girls Empowered to Make Movies (also known by the acronym GEMM), which was sponsored by The Girl Scouts, and Changing Reels, a media workshop for San Diego’s LGBT youth. Berliner is also a co-curator of Los Angeles Filmforum’s Festival of (In)Appropriation — which highlights experimental movies with found footage. She trained as a filmmaker while earning a Ph.D. in Communication. Lichty has a history utilizing Photovoice as both a pedagogical tool and a platform for digital storytelling. She brings her background in community psychology, program evaluation, and seven years experience researching a number of youth programs.

As Berliner explains, their critique focuses on the administration and policy issues involved in program development and implementation and how community centers must “learn the language of evaluation” in new ways to “speak back and alongside funding institutions . . . and bring youth to the table.” She also observes that too many funders rely on the assumption “that youth are inherently empowered through media production,” which can be a problem for unrepresented youth when there is “reflection and catharsis involved” in which the most important work is involved with something other than “finished product that is marketable.”

The GEMM program had a specific set of directives dictated by a specific media literacy that needed to be more flexible to serve its population. Berliner noted that it was founded in the spirit of progressive feminist documentaries spanning from “Killing Us Softly” (1979-2010) to “Miss Representation” (2011) and in step with the Geena Davis Institute on Gender and Media. Participating girls were encouraged to make public service announcements about issues that related to them during a local summer day camp that was later expanded to a national ten-day overnight program that benefitted from funding from the Annenberg Foundation and other philanthropic and trade organizations.

“The piece missing is the fact that girls are making media all the time,” Berliner pointed out, although young people “are not necessarily inherently skilled at the kinds of technologies that we assume they are.” However, because participants were coming in “with different experiences of technology, the process ignited a kind of sociality and intersubjectivity.” Ultimately, she discovered that “it was not about what it means to be girls — which was what was being told to them — but to come up with ideas, to be creative together, to be playful, to collaborate.”

Over time, Berliner “was empowered to play with the agenda so that we were involving ourselves more with activities that were process-oriented rather than product-oriented and making movies that were not topic or issue driven.”

For many years, Lichty has been concerned about what she calls “adultist language” that is foisted upon youth participants by well-meaning administrators striving for particular outcomes to please funders. She argues that media production programs aimed at underserved youth need to be doing formative assessment that inclues “attending to position and one’s own goals and values.” Rather than rely on metrics such as YouTube hits, Lichty argues for “creative ways to gather data” in which “empowerment is not predefined.”

Berliner had found the genre of the public service announcement problematic, particularly in defining what “issues” are worth making movies about. Topics such as “animal rights and the environment are safe and in purview of girlhood and safe to share with adults.” But, what about issues that are deeper, more personal, and less scripted? She described how two Katrina refugees in the program made a PSA about weight loss and pressures about body image while they were “living in someone’s house they didn’t know and living out of bags.”

Berliner observed that she saw something similar happen when she started the program with queer youth, which was a weekly media workshop that was loosely structured. It was a bare bones operation with donated textbooks and technology with ties to the Collective Voices Foundation dedicated to “the kind of media that the youth there wanted to make,” even if it adopted “a much more casual way” of articulating social justice concerns than formal funders might have desired. Like most cash-strapped organizations, Changing Reels was glad when AT&T swooped in with an anti-bullying grant, but she was worried about “expectations that groups would be empowered” and the fact that “the word bullying had not come up once beforehand.”

Because promises had been made, Berliner elected to go ahead, despite her reservations. Although she was “skeptical about the PSA genre as a critical mode of reflection and engagement,” she thought it might be interesting to provide mentorship and encourage LGBT youth to pursue what they wanted to do with it as they made “their own interventions.” Berliner marveled at how “there was lots of professionalizing discourse” with “youth concerned about funders and who the audience was.”

In the process of conducting interviews and synthesizing the material into a finished product, Berliner noticed a pattern in which participants tended to “edit out youth who were the most vulnerable,” because they showed substance abuse, homelessness, and life outside of the K-12 context that wasn’t about “articulating in sound bites.”

In this process, Berliner also saw the young participants assuming considerable agency in “making decisions about music” and reflecting “what their lives were really like” to “strengthen ties and experiences” that reach engaging with systemic rather than conversational issues. “They drew out emotions and discussion from youth who didn’t ever actually pick up a camera or get in front of the camera. They were just around the media technology in space.”