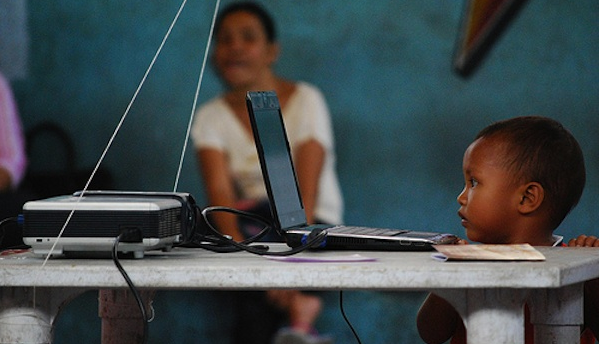 Many educators are excited by the new opportunities and challenges for learning that digital media brings us. Stories about 11-year-old Kai, a learner at Quest to Learn school in New York, paint a picture of a young person for whom digital media are an integral constituent of his learning at school and at home, his social life and his hobbies and interests. This picture of the digital native (pdf) – a young person who has grown up surrounded by digital media and is expert in its use – is a familiar concept in the field of digital media and learning. We are exhorted to update our teaching methods, tools and institutions to keep up with young people’s use of digital media outside school. But not all young people have the access to technology, the skills to use it, or the supportive network of peers and family enjoyed by Kai. Not all young people see digital media as offering them experiences that are personally meaningful and valuable. When we talk about digital media and learning, we need to always ask questions about who is taking up these opportunities and who is not. Questions of access, social justice and equality need to be placed at the heart of the debate.

The Reality of the Participation Gap

When media scholar Henry Jenkins talks about the importance of skills and competencies developed through “participatory cultures” to engage in modern civic, social and economic life, he is talking about practices that largely take place outside formal schooling. The deep, increasingly specialized engagement with niche interests and networks that some young people discover through their online participation is not structured by school or by parents, but is driven by motivated young people with the resources, skills, time, interest and social support to drive their participation. Those young people who are not engaging in participatory cultures outside school, and are not learning these skills within school are in danger of falling through the “participation gap.”

The concept of the participation gap echoes prior debates about the “digital divide” – the gap between the ‘haves’ and the ‘have-nots’ of digital media that maps closely onto socio-economic divides. While teachers have often recognised that having home access to the Internet can be a great resource for learning, many have been reluctant to ask their students to make use of it, for fear of discriminating against those children in their class who do not have access to these same opportunities. This has led to some very worthwhile initiatives, including in the UK the Home Access scheme, that saw low-income families with school-age children given vouchers to pay for a home computer and a year’s Internet connection.

But “access” to digital media is only the start. Simply giving young people access to the Internet does not automatically mean that they will immediately become immersed in deep learning experiences with digital media, and they may even find themselves at risk as they navigate new online spaces. In research from the University of Oxford, a group of young people who were excluded from or unable to attend mainstream school had good access to digital media but some rejected it as “boring.” Others did not have the technical skills to make use of digital technologies, or the motivation to learn them. Young people who are at risk in their offline lives are also more likely to be at risk when they venture online, and may even reject online participation in an attempt to protect themselves from unwanted online contact and content. The danger highlighted in the Oxford study is that the most disadvantaged young people, who might have much to gain from online participation, may not be participating online at all. Rather than seeing a wide range of possibilities for using digital media, these young people perhaps saw computer use as mere extensions of school work, or a space in which their offline vulnerabilities were extended into a less controllable space.

All Forms of Participation are Not Equal

But, even when young people are participating online, in the eyes of educators and policy-makers at least, not all kinds of use are seen as equal. The roll-out of the Home Access initiative was accompanied by fears that young people would not use technology ‘properly’ – that social media would distract them from the business of learning rather than enhance it. In fact, early evaluations have shown that Home Access students used their home computers for homework more than other students. But using computers to complete school homework assignments doesn’t sound like the kind of self-directed, open-ended and extensive engagement with digital media engaged in by Kai.

That kind of self-directed engagement depends to an extent on whether young people see for themselves positive consequences of using digital media that fit into their own social and cultural worlds, their own ideas of who they are and who they want to be. In a telling example from the Digital Youth Project, the digital participation of two teenage boys in the San Francisco Bay Area was described, with one from a wealthy home making extensive use of Internet, media and software in a heavily-resourced bedroom while another boy in a less well-off area used computers to maintain his MySpace profile at a community center where he attended TV and film production classes. While at first it appeared that this could be an apt illustration of the “participation gap,” with one boy using digital media in ways the other was not even aware of, each boy’s media use served his own purposes well, fitting into their own offline interests, peer networks and cultures.

To Engage at Deeper Levels, Youth Must See Relevance

So, engagement in participatory cultures is not just a linear trajectory from less to more participation, but includes a wide range of forms of participation, which in turn reflect people’s cultures and individual identities. In our efforts to ensure that all young people have the opportunities to learn with digital media in school and at home, we need to allow them the time, space and support to find ways to use digital media that make sense to their own conceptions of who they are, how they relate to their communities and how they want to express themselves. If we provide access to digital media, but only support their use for narrow purposes such as homework, young people are unlikely to find themselves with the free rein, space, support and skills to use them (or to make informed choices not to use them) that enables them to access the opportunities for learning enjoyed by students like Kai.

We need to find ways to support young people to make use of digital media in ways that are meaningful and valuable to them within their own cultural identities, rather than restricting their use to narrowly-constructed educational purposes or particular cultures of participation. Without acknowledging and working with the diversity of young people’s offline and online participation, we risk reinforcing rather than reducing inequalities.