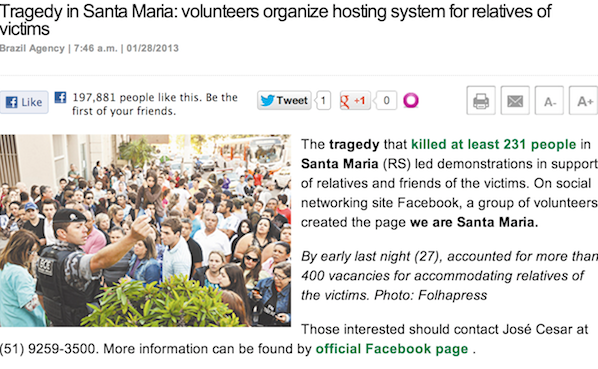 On the early morning of Jan. 27, one of the most striking tragedies in Brazil’s history took place. A fire started and spread in a popular nightclub in Santa Maria, killing more than 230 people and wounding another 116. The fire began when members of a band ignited fireworks for special effect. A spark reached foam insulation in the ceiling, quickly filling the building with toxic smoke that killed the majority of the victims. Most of the victims were young students from local universities, between the ages of 17 and 20.

Almost immediately, online social networks began playing a powerful role. A few hours after the calamity, people started using social networking sites not only to spread news but also to provide information for the many people who wanted to help. One of the biggest campaigns for blood donations started on Facebook just a few hours after the tragedy. It was so successful authorities had to ask people to postpone their donations for days, even weeks, because the blood stocks were already full. Porto Alegre Hospital posted on Facebook that it had received a record number of donations in two days.

This didn’t only happen in Santa Maria. The campaign spread further to other cities and states, including Rio de Janeiro, which had a major increase in the number of blood donations.

Another campaign was created for the donation of food, water and medical supplies. Tons of donations from other cities reached Santa Maria very quickly. Through social networks, authorities also asked for medical staff, volunteers and social workers to help the wounded and loved ones who were mourning their losses. Hundreds came.

Yet another example of the solidarity was the webpage, “We are Santa Maria” (somos Santa Maria), created for people who wanted to show their support to families of the victims. Many of the dead and wounded were students who lived far away from their homes. Volunteers offered their homes to lodge families who streamed into the area.

Online social networks also played another powerful part: There were many heroes in the tragedy. Many people died after and while saving others. Social networking sites helped many survivors pay tribute to their rescuers by helping them find their rescuers’ families so they could thank them in person and offer whatever comfort they could by recounting the deeds of the fallen rescuers. Jonas Vieira, for example, is alive only because Matheus Rafael Raschen saved him, helping him out of the nightclub. Matheus went back in to save more people, and never came back out. After leaving the hospital, Jonas used Facebook to track Matheus’ family and thank them. There were many like Matheus — young people who were safely out of the fire and went back to save others they didn’t even know. Their stories were spread across Brazil through social networks.

Finally, social networks helped honor the people who lost their lives in the fire. Using Facebook and other social networking sites, people from many Brazilian cities organized silent parades. Thousands of people walked to remember, and to pray.