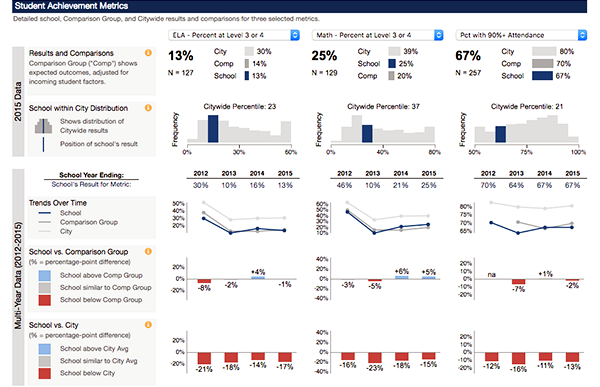 In my first blog post for DML, I proposed that parents in school choice markets interpret and act on school performance data in ways that reinforce racial and socioeconomic segregation. New York City public schools are growing increasingly racially segregated, even public pre-K, according to a recent report from the Century Foundation. Economic segregation is also increasing, particularly within the 100 largest school districts, which saw a 30% increase in economic segregation between 1990 and 2010.

Meanwhile, 50 years of high-quality qualitative and quantitative research indicate that socioeconomically integrated schools are a win-win, leading to improved outcomes across the board. When the children of professional, highly educated parents are educated alongside children of working class parents, the performance of the former group is unaffected and that of the latter group rises. Schools enrolling a critical mass of children from relatively privileged backgrounds tend to have less teacher turnover and additional resources from PTA fundraising that significantly augment official school budgets, and when working-class children attend these schools, they reap those benefits. However, when parents use student performance data to make school choices in ways that exacerbate segregation, a negative feedback loop is created such that low test scores, an effect of unequal investment, perpetuate further inequality.

The framework of school choice relies on data as a seemingly objective source of information for parents to draw upon in a rational decision-making process in order to maximize the social, cultural and economic capital to which their children have access, aka to get their child into the “best school.” Of course, parents could also define optimal outcomes differently. In either case, it is critical to highlight that although a veneer of truth and impartiality attaches itself to data, data is always laden with a host of assumptions, omissions, values, and embedded biases. These impartialities may be introduced at many points in the process, including data collection, cleaning, parsing, presenting, and use.

In its pure form, school choice takes the individual family as its unit of analysis, maintaining agnosticism about the broader social implications of individual choices. This is dangerous because small individual preferences easily translate into large collective biases, as illustrated by the Parable of the Polygons, a simulation of the persistence and insidiousness of residential segregation introduced to me by my colleague Suchana Seth. Combatting segregation is a practice that must be actively engineered through social policy. Indeed, in school choice contexts, schools tend to become more segregated unless specific actions are taken. Controlled choice at the district level (in place in Cambridge Public Schools, and proposed in New York City’s School District 1, 3, and 13) is a promising top-down tactic, and one that could be supported by bottom-up approaches that acknowledge the boundaries of what the data can tell us.

Parents need to understand the limitations of the school performance data. We should include alongside the data sets, of which New York City’s School Performance Dashboard is an exquisite example, a set of caveats. These shouldn’t be asterisks, but rather front and center framing devices:

In our technocratic society, we are predisposed toward privileging the quantitative. So, we need to find ways to highlight what is truly helpful in the data, but also insert an element of creative distrust. We need to encourage data consumers to think deeply about their values, rather than using data to reify knee-jerk prejudicial attitudes. Data scientists and engineers are in the position to help shift the conversation around data as truth.

To do so would be a great service to our collective future and would help individual parents make decisions around their child’s education in a more nuanced way. We live in an age of deep parental anxiety around processes of social reproduction and the transmission of class privilege. Critical geographer Cindi Katz characterizes our current moment as one of “ontological insecurity.” This insecurity may have more to do with the seductions of data in this historical moment than we care to admit.

Those whose work it is to package and parse data for public consumption know better than anyone the vulnerabilities, partialities, and omissions inherent in their data sets. If data scientists are willing to make this information visible, they can help undermine the myth that data can be read as truth without critical interpretation or contextualization. Such a move would encourage data consumers to embrace head on their fear and anxieties, and perhaps spur individuals to hold themselves more fully accountable to their own political ideals.