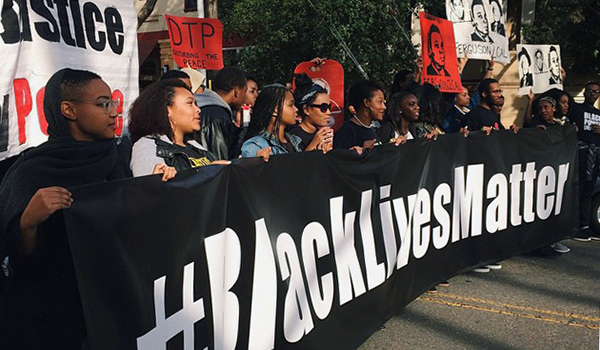 I grew up in Oakland when the Black Panthers were setting up free lunches and breakfasts for me and my classmates in Oakland public schools and carrying guns to defend themselves and their community from the Oakland police. I grew up not trusting the police. It wasn’t an active distrust, but a vague terror that the police might at any moment stop me, arrest me, beat me for no reason at all. I still carry that quiet terror with me 40 years later.

Every black man in my life has had experiences of police violence similar to the experiences of Eric Garner, Michael Brown, and Milton Hall up to the point just before the fatal chokehold or gunfire. There was no place in my imagination where the police protected and served me, where black lives mattered to the police. I had neither the experiences nor the resources to imagine a worldwhere police protected and served me and the people in my community. There was no technology connecting me to other young people and communities experiencing the same kinds of abuse, no digital tools enabling the community to document the story of that abuse. Technology was not one of the resources of my imagination. 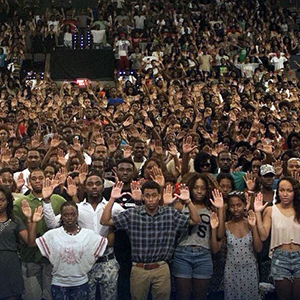 In the uprisings in response to recent police violence in Ferguson, New York, Cleveland, and other cities around the country, technology has opened up new spaces for imagination, provided new materials and resources to form those experiences into powerful responses to police violence and the lack of accountability for that violence. In the fluid uses of what I call digital civic imagination, the #BlackLivesMatter meme has moved across social media platforms and online networks and become a rallying cry in demonstrations and protests fueling participatory politics in cities across the country. I’ve been impressed, awed, and inspired by this uprising but, I’m interested in the step before when these forms of powerful engagement are seeds of imagination, specifically the digital civic imaginations of young people.

I first became interested in this idea of digital civic imagination in 2010 when I was interviewing high school and college students in different parts of the country about their civic engagement activities as part of the Youth Participatory Politics Survey Project, a project of the YPP Network. I asked these students to identify an issue in their school or community that mattered to them and then describe how they would go about solving the problem. After defining important issues like violence in their community, segregation, lack of resources in their schools, most of the interviewees went on to describe strategies to address the issue that did not include digital technology. Despite the fact that all of the students reported using digital media in multiple ways, technology was not an active resource for most of their civic imaginations.

I’m defining digital civic imagination as the capacity to imagine strategic uses of technology to address social and political issues from digital tools typically used for personal and social purposes. Unlike when I was a teenager and grappling with issues of systemic injustice, new technologies and virtual spaces are now potential spaces where young people can map/articulate their civic imaginations in ways that serve as a bridge to empowered civic and political engagement. With the ubiquity of technology, it is also a bridge available to most young people. It is tempting to assume based on the inspiring examples of movements like  #BlackLivesMatter and the Dream Activists that young people are accessing that bridge and making connections between personal and political uses of technology — that new technologies are materials of imagination for all young people. But, in speaking with young people about how they would use digital technology to address the problems that most concern them, it’s clear that they are not doing so.

Of the students I interviewed in 2010-2011 about issues that mattered to them in their communities, 20 out of 25 had to be prompted to talk about how they would use digital media. For some, just the question triggered the beginnings of an expanded imagination. Other young people had interesting ideas to address problems like school segregation, violence, and lack of resources for teens, but their digital strategies did not support the creativity and innovation of their ideas.

One student, active in playing online first-person shooter multiplayer games, saw “mean mugging” that leads to violent confrontations as a problem in his community. His first humorous solution was to have everyone wear sunglasses. In response to a prompt about how he might use digital media he responded, “I can’t think of any way. I mean, maybe make a YouTube video saying, ‘All fighting is bad.’” He had ideas about how to spread the video through social networking, but in the end, he said he probably wouldn’t make a video like this. Another student who wanted to address “gangbanging” by encouraging gang members to participate in sports said, “I would post flyers. I would get my friends to spread the word, too. You could also put it on Facebook, and you’d be like a new group or something and that way everybody would see.” Another student who wanted to address school segregation through a student exchange program described his digital strategy: “Well, I could actually invite different principals to read about and discuss the group and maybe a chat room and see if they like it. And, if it gets popular enough, maybe Rahm Emanuel would consider it.”

These examples demonstrate some imagination, but do not describe digital strategies that can address the depth and complexity of the issues that matter to the young people. They are far, far ahead of where I was when I was a teenager, but their technology is not yet an important tool of their civic imaginations. The sexy examples like #BlackLivesMatter and the Dreamers show what is possible, but not what is universal. What enables young people to imagine and realize powerful uses of technology to address civic and political problems?

During the 2013-14 school year, I was part of a team doing research on a digital civics initiative — Educating for Democracy in the Digital Age (EDDA) — that had launched in Oakland Unified School District in 2011. EDDA is a partnership of the Civic Engagement Research Group at Mills College, Oakland Unified School District, and the National Writing Project and funded by the Bechtel Foundation and the MacArthur Foundation. It was through work with Ellen Middaugh on her research project on media literacy and civic engagement that I began to see how we can respond to this challenge.

In 2013-14, we followed four teachers whose EDDA work had a media literacy focus, spending many hours observing in classrooms, and interviewing and surveying students and teachers. We are now in the process of analyzing data from classroom observations, interviews, and surveys, and delving into the impact of media literacy interventions on students’ media literacy and civic capacities. There is much more to come on that, but looking through the frame of digital civic imagination at the work of these four teachers, I see that they were engaging their students in the nuts and bolts of building technology into a material of their imagination. Through online research and writing, students engaged the larger questions: How do you develop a complex understanding of your issue? How do you communicate your ideas to a larger audience? The nuts and bolts were “key words,” “search,” “credibility,” “sources,” “evidence,” “trustworthy,” “bias,” “audience,” “research,” “relevance,” “presentation,” and “voice.”

Where my asking the question to young people in 2010-2011 opened up a possibility for beginning to exercise digital civic imagination, these teachers have begun laying a foundation for technology to become an integral part of their students’ imaginations. For students who lack access to media literacy resources outside of school, it is critically important that they have access in school.

An EDDA student, in response to a question about whether she would continue working on the issue of sexual harassment, said:

“Before, I never really thought about it [sexual harassment] …. I would say, just by looking at my essay now, and the work I had done all this period [a significant amount of online research] and all this time, and what I have learned from it, I learned things I never knew, things I never thought that I would ever learn…. I would say yeah, why not? I would really work on it hard to improve it.

Now, she begins imagining she will!

There is something sacred about the bridge where digital civic imagination lives. It is where the creativity, knowledge, and unique perspectives and gifts of an individual young person can come to life. It is a foundation for informed, empowered civic and political action and, potentially, a space of wonderful possibility. We cannot assume that “digital natives” have digital civic imaginations that will serve their goals as civic actors. It is not an easy bridge to build. I have seen amazing teachers in the EDDA initiative doing this work with students in Oakland high schools and enthusiastic, curious young people eager to join their teachers in this work, but teachers and schools need support. If we’re going to reach all young people, media literacy and civic and political learning need to be priorities in our schools. On the ground, in the classroom, we need to ensure that teachers have the knowledge, technology resources, time, and support to make media literacy and civic and political learning integral parts of their curricula.