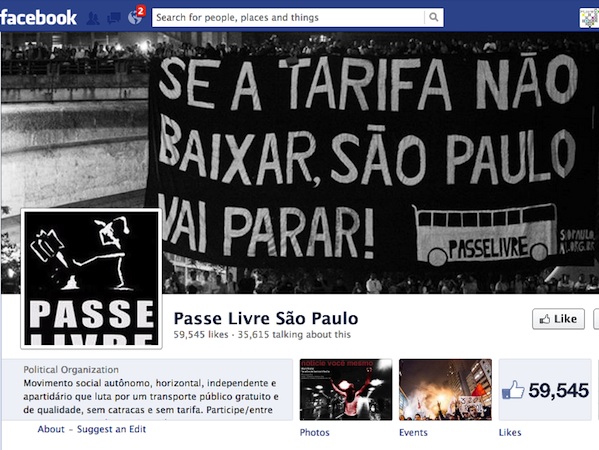 Like Turkey, Brazil is seeing a wave of anti-government protests it hasn’t seen in years. Thousands of residents in several cities, including Brazil’s two biggest cities, Sao Paulo and Rio de Janeiro, are now organizing protests.

Protests started in Sao Paolo after the government had authorized (another) increase in bus fares in the city. Through social media, the movement “Passe Livre” (Free Pass) formed online and quickly drew more than 50,000 supporters. Most of the protesters are university students, although officials said “anarchists” looking for a fight were also taking part.

Mainstream media are portraying the protests in an interesting light. Major newspapers, as well as television and radio, are describing the protests as limited to certain places and organized by “vandals” that are “destroying the city.” In Sao Paulo, state governor Geraldo Alckmin told the BBC, “What we are seeing is a political movement – small, but very violent.”

Yesterday, the conflicts escalated. The scenes in the streets were war-like. The protesters were violently repressed by the police. Several videos and pictures displaying police truculence against unarmed people appeared online. Several blogs, Tumblrs and stories appeared on social networking sites. The accounts on social media contrast sharply with mainstream media and official versions. On social media, many individuals express concern about the overall state of democracy. 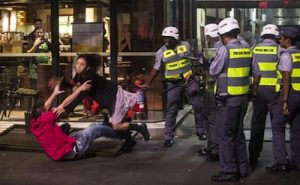 Here are some links to:

Journalists were also beaten and arrested. One journalist, Piero Locatelli, wrote that he was arrested because he was carrying vinegar (which attenuates the effects of tear gas, which has been used against the protesters).

At the same time, mainstream media outlets are continuing with their pro-government, pro-police discourse.

However, the combination of the escalation of violence by police and citizen accounts circulating in social media has generated public support for the protesters. More people are talking about the movement and more protests are scheduled to happen this weekend in cities across the country. A new hashtag (#SP13j) emerged yesterday to compare the protests happening in Brazil with others around the world (the Arab Spring, for example, with #Jan25).

During a popular television show, “Brasil Urgente” (Urgent Brazil), anchorman and host Jose Luiz Datena proposed a poll for the audience to vote on the protests. The television show had consistently characterized the protesters as violent and the police as just doing their jobs. The poll was simple: “Do you agree with the protests, with the troublemakers?” The answer was a resounding “Yes.” Immediately, Datena changed his discourse live on television. He said “The people are discontented. Between police and bandits, I prefer the police. Between the people and the police, I prefer the people.”

Meanwhile, the government in Sao Paulo is defending the bus rate increase, saying it will not submit to the protesters.

You can expect more indignation to spread on blogs, Tumblrs and social networks. There will be more demonstrations too. A CNN account can be found here.