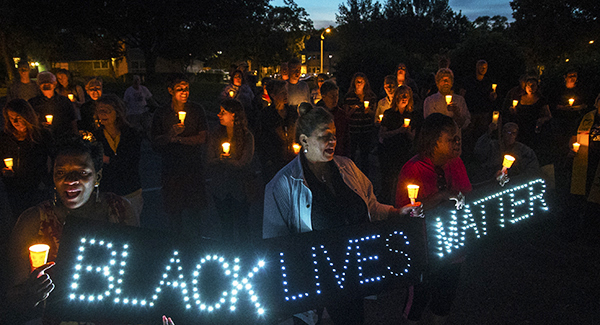 As I write these words, St. Louis County has just declared a state of emergency in Ferguson, Missouri, in the wake of protests marking the one-year anniversary of Michael Brown’s death at the hands of police officer Darren Wilson.

When word began to spread that night that protests were taking a violent turn, I did not immediately turn to The New York Times, CNN, or any other traditional news source to learn more about what was happening. Instead, I turned to Twitter. There, I found first-hand reports from people on the scene in Ferguson about what was happening from their perspectives, often accompanied by short videos that let me view snippets of the action myself.

In this chillingly violent year of police violence in which citizen video has been crucial to exposing obfuscation or outright lies promulgated by people in power, I find myself doubting “official” statements. I instinctively look for other narratives and gray areas since things are almost always more complex than they seem on the surface.

And, as I scroll through my Facebook feed, I notice that many of the students who I taught in Brooklyn 10 years ago and who I still keep in touch with are also expressing skepticism of these dominant narratives and sharing alternative perspectives. This makes me proud; after all, aren’t critical thinking and awareness of author bias crucial literacy skills that we want all of our students to possess?

Plus, a healthy skepticism of state power is part of a strong protest tradition among communities of color who have experienced marginalization in the name of a country purportedly committed to equality; for instance, as James Baldwin wrote in 1963 in “The Fire Next Time,” black Americans possess “the great advantage of having never believed that collection of myths to which white Americans cling” (p. 101).

Then, I came across an article in The New York Times (yes, I still read it) headlined, “They Helped Make Twitter Matter in Ferguson Protests,” which features three African-American protesters and organizers discussing the power of social media as a new tool in the continuing civil rights struggle.

In the video that accompanies the article, Baltimore organizer DeRay Mckesson (@Deray) explains, “What is powerful about what people term ‘Black Twitter’ is that Twitter became a platform for us to talk to each other in ways that weren’t mediated by dominant culture.” Mckesson’s words made me think about the power of social media to provide young people with a space to share counternarratives to push back against the dehumanizing portraits of their communities that are too often offered in more static news accounts.

In the same video, Chicago organizer Johnetta Elzie (@Nettaaaaaaaa) expresses the initial despair that she felt when she heard about Michael Brown’s murder and how she turned to social media to reach out to a community that shared her outrage:  “All I had was my Twitter and my Facebook and my Tumblr and Instagram and so I felt and I really believed that someone somewhere would care about what I was saying.”

Elzie’s sentiment resonated with me, reminding me of the research I’ve read about the importance of social media in the lives of today’s teens as a source of connection. The Pew Research Center recently reported that 57% of teens, ages 13-17, have made a new friend online and the most common spots to meet online friends are social media sites (most popular: Facebook, Instagram, Snapchat and Twitter).

But, what Mckesson, Elzie, and my students teach us is that social media does more than simply foster friendships; it offers an opportunity for young people to produce media and find their voices in public life. For educators, this means that digital technology in the classroom can aid in more than academic learning — it can also foster engagement in participatory politics.

I have experienced the power of inviting young people to become the producers of knowledge rather than mere consumers firsthand. My work involves mentoring young people to develop questions about issues in their communities that matter to them and then conduct their own multimedia research projects through a practice called Youth Participatory Action Research. I have some ideas about how teachers can incorporate this kind of work into their classrooms in order to help students develop critical thinking and critical media literacy skills, which can be greatly amplified through social media tools.

I suggest that we educators consider the role that social media tools can play in helping to dismantle traditional power hierarchies regarding which ideas and perspectives are considered objective and true and how we can invite students into national conversations about racial justice through the creation of their own counter-narratives. We have powerful hash tags to inspire us — what new movements can our students create?