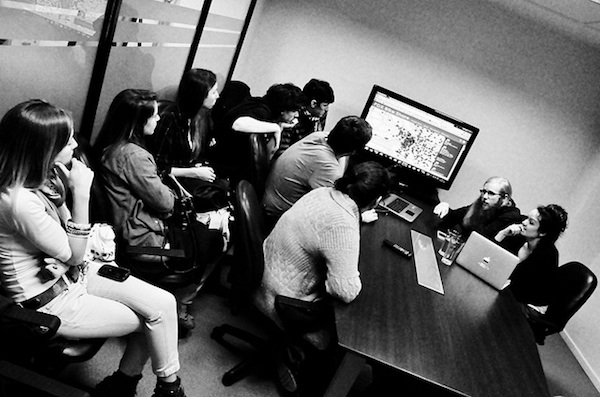 I recently returned to the UK from a trip to Argentina. I had been invited to speak about The Virtual Revolution, the television series I presented for BBC2 2010 by the OSDE Foundation, the community arm of the country’s largest health care provider. While there, I had the opportunity to learn a bit more about the country and what is motivating their technology industry.

Like many around the world, the Argentinian government wants to increase their blanket of access. They currently boast a not insubstantial 54% internet access rate — an impressive figure given the size of the country (41,281,631, the 2012 estimate according to Wikipedia), and the rural-urban proportion (fewer than one in ten people live in rural areas). Compared with the UK — which has a 69.5% household high speed access rate for its population of 62,641,000 people, and the US, with 68.2% broadband access for a country with an 82% urban concentration, Argentina is representing Latin America pretty well on the global stage (statistics provided by the OECD). Unsurprisingly, like many developing countries, its mobile phone adoption rate is even more astounding: 134%, according to Dr. Francisco Albarello, Professor in the Faculty of Communications at Austral University.

Belen Igarzabal from FLACSO is currently producing an 8-part television series inspired by The Virtual Revolution which will look at the impact of this communications technology on Latin America. She and the production team are traveling to Brazil, Peru, Paraguay and Uruguay to explore the issues from a particularly South American perspective: “There’a a lot of research about how the internet is evolving and changing our participation, governments and economics around the world, but nothing about South America. We have particularities: we are a mix of cultures — Aboriginal, Spanish, Portuguese — and that mix makes us different from other parts of the world in terms of how we connect, how the government is involved in connectivity, in education.”

I believe this is an incredibly important project: As Ethan Zuckerman has pointed out in the past, we so rarely look outside our own contexts to see what’s happening in the world around us; the documentary we made at the BBC was undoubtedly informed by our British sensibilities, and we were able to draw our conclusions based only on this perspective — despite our efforts to include as many contributions from as diverse an audience as possible. According to Belen, who references an academic, Nestor García Canclini, the Argentine attitude to technology development is informed by its cultural hybridity — of Europeans, Latin Americans and the few indigenous cultures left in the country. They tend to mash things up using the systems that are already available, rather than creating technologies that are brand new.

But there’s more. At a working breakfast organized by OSDE with national media and academics from the largest communications departments at the world class universities in Buenos Aires, I learned that there’s a lenient attitude towards peer-to-peer filesharing (“Another particularity about South America is that we are expert pirates,” Belen told me, laughing. “That’s a kind of creativity we have.”). At the Hacks/Hackers BA event — the largest hacker event of its kind in South America, and the fifth-largest after New York, San Francisco, London and Boston — most of the people who were cobbling together their digital solutions were trying to create systems that encouraged openness — of data, of ideas, of content, and of perspectives.

Later, I had the chance to ask Belen more about this. She believes the trends in Argentina will provide the groundswell for the CopyLeft movement, and for alternatives like Creative Commons, that will bump it into critical mass adoption: “Creative Commons is contagious in Latin America,” said Belen. “It’s spreading around the continent.” When I asked why, she laughed again. “It’s because we are always doing revolutions. We are a revolutionary society. It’s another particularity: we are always trying to be free from dogmas and laws that come from other countries. Now there’s a revolution in the internet, shown by this way to give access and distribute content.”

Unfortunately, I only had the briefest taster of the Argentinian technology scene, but what I saw has inspired me to go back and look closer and to discover what it is that they are producing that meets their needs that might, in future, meet ours as well.