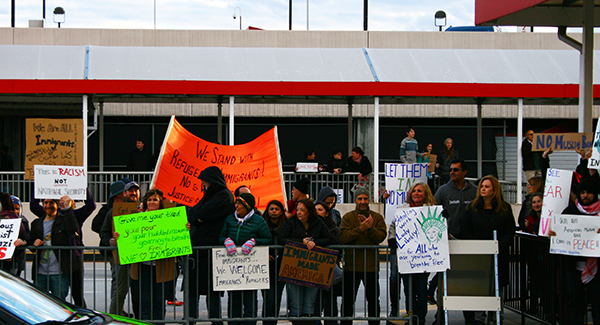 Everyone is talking about the impact of the Executive Order from Trump to ban citizens from seven Muslim-majority countries from entering the U.S.

The big tragedy is, of course, families who are unable to be reunited. But, universities are also affected, and people are trying to do what they can to express their disagreement with the executive order: Arab students are unable to go back to their campuses. In solidarity, some academics are considering boycotting U.S. conferences. Several institutions are considering moving conferences to other places. For example, Digital Pedagogy Lab is considering creating an event in Canada for international colleagues just to be safe because anything can happen. Because America today is suddenly different for Muslims than it was 10 years ago. I almost wanted to apologize for causing this inconvenience (being one of the keynote speakers and teachers in this event, being from a Muslim country, while not currently banned, could someday be) but, of course, I didn’t and wouldn’t, and I know no one wants anyone to apologize. My friend recently told my kid, “I’m sorry my country is being so bad to people from your part of the world.”

I want to remind everyone to keep the broader perspective on this. The tragedy here is people who are separated from their families and their homes. Nothing dramatic will happen to international scholars if they miss a conference. It’s unfair and a problem, but not the biggest problem. Conferences can and should embrace virtual presenters (I wrote some tips here) and consider involving Virtually Connecting. Sure.

But, just so you know, for conferences, people like me from visa undesirable countries are used to things:

No one from my part of the world will bat an eye if their visa to the U.S. gets refused. This happened to almost everyone immediately post 9/11. No one will bat an eye if they get treated weirdly in airports. That’s, like, normal. Not that we should accept it or anything. It just is. And, we rise above it because we have a goal to achieve wherever we are going and we want to get on with it.

What’s new here is people who already have valid entry into the U.S. getting refused entry. People whose homes and families are in the U.S. being unable to reach those homes and families. That’s tragic and those are the people we should be focusing on. One piece of good news is that the White House backtracked on freezing entry for green card holders. But, a large number of students and U.S. employees are on more precarious visas and still at risk. People we know (from outside the specific countries covered by the Executive Order) have been advised not to leave the U.S. lest they be refused re-entry.

Do what you can to help. Protests and helping though the law will make a difference. And, here in my Chronicle of Higher Education article, are some ideas for how to help individuals around you on a daily basis. From the article: