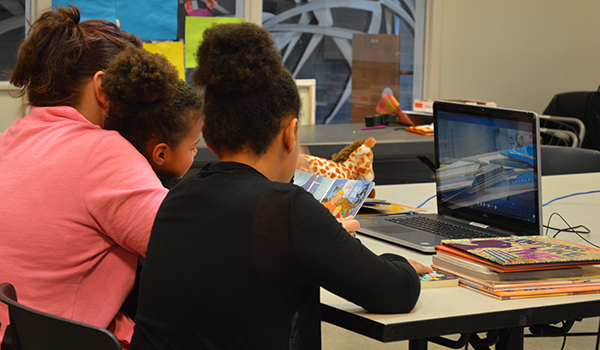 “If you stare at a painting and do not see yourself there, paint your own portrait.” — Spike Lee and Tonya Lewis Lee, “Giant Steps to Change the World”

At her neighborhood library in Philadelphia recently, an 8-year-old girl enthusiastically sang a couple songs, danced, shared jokes, discussed her birthday wishes and read several books with her incarcerated mom via video conference. The hour-long encounter, made possible by the Free Library of Philadelphia’s Stories Alive program, was the second for the mother and daughter.

“She was so excited to see her mother again,” said Titus Moolathara, head librarian at the Free Library of Philadelphia’s Widener Library who initiated the program. “The girl had so much to share. This session made my day.”

All the sessions are moving as children connect with their incarcerated parents through reading books, he said. This video captures the program’s purpose:

Before joining the Free Library in 2012, Moolathara worked in a Pennsylvania state prison library, where he observed the positive impact that library access had on inmates. With his prison library expertise and Free Library staff support, Moolathara launched a pilot program in a Philadelphia Department of Prisons (PDP) in 2013. The pilot established a temporary standing library at Curran-Fromhold Correctional Facility, a PDP men’s facility. During the three-month pilot, 100 inmates visited the library 360 times and had access to 600 books.

“The pilot library was enormously successful — improving inmate reading levels and reducing their number of verbal and physical incidents. As a result, PDP approved the expansion of standing libraries. Later, the Free Library was notified that library users started to participate in the Messages from Dad program, a video recorded story program,” Moolathara said.

Building upon the success of the prison libraries, Moolathara and other library staff developed ideas to expand programs and services for incarcerated individuals, returning citizens, and their families. Project staff proposed two new linked services: Stories Alive, a family literacy televisiting program, and the dissemination of temporary library cards and reentry resource packets to returning citizens on the day of their release, making the full range of library resources immediately accessible. The program, launched last year by Free Library in partnership with the Philadelphia Department of Prisons, is being funded by a grant from the Institute of Museum and Library Services. More than 40 families have taken part in the video conference calls and plans to expand the program are underway, Moolathara said.

“Guided by the library’s strategic goal to encourage family-based literacy so that parents and caregivers become full partners in the educational development of their children, Stories Alive connects incarcerated parents with their children and families through live videoconferencing stations set up in the prisons and in neighborhood libraries,” he said, adding that the children leave with the copies of the books they read, allowing them to reread the stories they shared with their parents and grow their own personal libraries. To encourage sustained engagement, families receive materials about literacy and family enrichment programs available at their libraries.

The program’s books, appropriate for children 0-12, focus on parent-child relationships and reflect diversity. Several Spanish language titles are included. A complete set of books is at each prison facility. Some of the more popular titles among the participants include “Giant Steps to Change the World” by Spike Lee and Tonya Lewis Lee, “Looking Like Me” by Walter Dean Myers, and “In Daddy’s Arms I Am Tall,” a book of poetry by various authors.

The program makes a positive impact on the families who participate, said Blanche Carney, commissioner of the Philadelphia Dept. of Prisons. “If the children can stay engaged in a positive way with their parent, it really does increase the likelihood for their success.”

For Crystal Johnson, who brings her kids to the library to read books with their incarcerated dad, the program “is a chance for the kids to grow and learn and take education a step further, and it lets their dad be included in the whole process since he’s left out of a lot of things. He gets to read to them and see their progress and show them that he cares. It’s nice.”