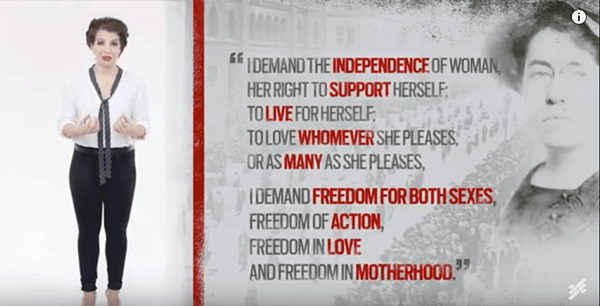 Emma Goldman was born in 1869 in Russia. When she was 15, her father tried to force her to get married and when she refused, he threw her French grammar book in the fire. At 16, she left her homeland, immigrating to the United States where she discovered her calling as a political revolutionary.

Her story comes to life as narrated by Anita Sarkeesian, in this just-released video series, “Ordinary Women Daring to Defy History” by Feminist Frequency:

“The Revolutionary Life of Emma Goldman” is the first of five videos in the series, telling the stories of five little known women in history. The women include Goldman; Ada Lovelace, writer of the first computer program, Ching Shih, a pirate captain; Murasaki Shikibu, inventor of the modern novel; and civil rights leader and journalist Ida B. Wells. Sarkeesian, founder of Feminist Frequency, narrates each episode.

According to the series announcement, the goal is for the project to “help shift perceptions of what girls and women can do, not just in exceptional cases but in perfectly ordinary ones.”

In a recent interview with Marie Claire magazine, Sarkeesian says: “The struggles women face today are simultaneously very, very old and very new. The struggles of dealing with online harassment is the same harassment that women have been dealing with, it’s just a new medium in which it’s happening. And, when we look at these historical women and what they’ve gone through, it’s shocking to recognize some of our own experiences in theirs. When you look at someone like Ada Lovelace who is the first computer programmer, during her lifetime, doctors said that was really sick because she was trying to use a masculine kind of brain that she didn’t have. Today, her legacy of being the first programmer is still disputed. During her lifetime and also contemporarily, she is constantly undermined. Maybe today we aren’t being told that our brains are not capable of such things, but we are being told that we are not good enough or smart enough or that our successes do not belong to us.”

The following are excerpts from Sarkeesian’s narration in “The Revolutionary Life of Emma Goldman”:

She was horrified by the tragic story of several labor activists who were executed in Chicago and found herself drawn to the labor movement and eventually to anarchism. Contrary to what that word might suggest, Goldberg’s philosophy was not about disorder and chaos, it was about personal freedom and rejecting institutions she believed were repressive — government, religion, war, business interests and even marriage.

Goldman quickly became one of the most famous radical figures whose power with words was sometimes referred to as a sledgehammer.

Over the years, Goldman was sent to prison for her ideas several times — once for promoting birth control, once for discouraging men from registering for the draft and once for telling unemployed workers to take bread from the wealthy if they were deprived from work and food.

She believed that women needed to reject the sexist roles of societies and government and assert their right to make decisions about their lives and their bodies. Only that, said Goldman, would truly set women free.

Goldman was a thorn in the side of American authorities for many years. In 1919, they finally declared her American citizenship invalid and deported her back to Russia.

When she finally returned to America in 1934 with the permission of the Roosevelt administration, Goldman was a grandmotherly figure in her 60s but just as stubborn and outspoken as she’d ever been. On her final U.S. speaking tour, her speeches rallied against the fascism of Hitler’s Germany and the communism of Stalin’s Russia, angering people on the right and the left.

As she once said when a young man tried to stop her from dancing, she would never stop fighting for a world where liberty was the birthright of every human being and where women could live, love and dance as freely as they wanted.

Banner image: screenshot from “The Revolutionary Life of Emma Goldman”