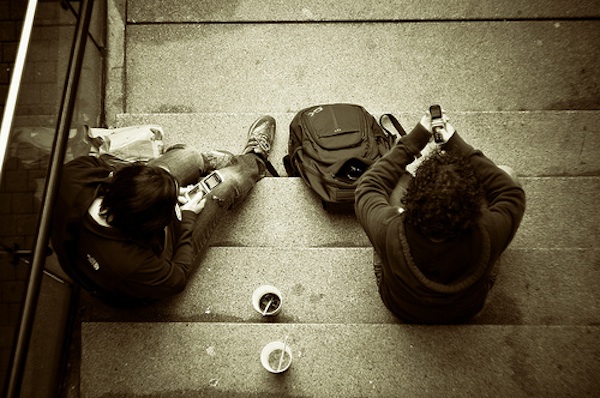 Yes, most of my college-age friends know how to operate a computer and navigate online. But they come to me if they want to know the best way to backup an iPod, or where to watch movies online, or for inquiries that require more knowledge about cool resources on the Internet.

I was born digital and live digitally. To me, having a digital native sensibility means using Google as a primary inquiry resource, sending an event flyer via Facebook, and using Skype instead of a phone. But I honestly think this orientation has more to do with how I was raised than my age.

My dad is an electrical engineer so he created an environment conducive to media learning. As a gadget enthusiast, he taught me how to use a computer early on, which back then was a measly 15 MHz and 5 MB.

What’s interesting to me is that my dad would be considered a “digital immigrant” but he has much more technical expertise than a digital native like me. I can teach him how to find the cheapest golf clubs, but he can troubleshoot my computer.

When I was 7, my dad bought me “Where In the World is Carmen Sandiego?” and it immediately sparked my interest in geography, and desire to learn about other cultures and countries. Even though it was a simple computer game, it eventually had a lot to do with my decisions to join Model United Nations in high school and to major in International Studies at UC Irvine.

Likewise with my online activities, it was my home context, more than any other factor, that stirred an early interest in specific technologies or digital media practices. Conversely, as I’ve gotten older, I would say my digital media-related activities and fluencies have been driven more by situational necessity.

In middle school, my computer use was mostly socially-driven. Before Facebook and MySpace, there was RateaPix. Basically, members would rate randomly-generated photos of other members. This was before consumer digital cameras were the standard, and when most people were using film cameras or webcams. RateaPix allowed me to channel my narcissistic tendencies while judging how other people looked based on the site’s rating system. As if puberty wasn’t hard enough, I was negotiating my physical appearance based on other users’ standards of beauty.

AOL Instant Messenger (AIM) was the app of choice for chatting with your friends and even randomly IM-ing the guy you were too shy to say hi to at school. I don’t use AIM as frequently as I used to, because Facebook has pretty much replaced it. I have more than 200 people on my buddy list, but I probably talk to only 20 of them and that’s if they happen to be online when I am.

From Consumer to Creator

In 7th grade, I grew tired of updating my AIM profile so a friend introduced me to Homestead. It was a free website that let me create my own website with a simple click of a button. It allowed me to customize the template, add information about myself, upload pictures, and have a guestbook for people to leave comments. Even though I had no previous HTML experience, I was able to design my own webpage and had my first taste of creating my own content. I would post my link on my AIM profile for my friends to see.

My Homestead experience inspired me to learn basic HTML code (aka, copy and paste), so I could tweak my page to my liking and amaze my friends with my HTML prowess. Over the years, even learning basic HTML code has helped me understand how to use an open source blog like WordPress. Today, it isn’t necessary to have a working knowledge of HTML since most sites like Facebook have customizable options. After that, I moved to Xanga and LiveJournal and they allowed me to experiment with creative writing. Creating and sharing my own content as a preteen enabled me to express myself and form my online identity, which was constantly evolving at that age. Looking back on it now, I remember when people would make fun of me for having a blog. I have to admit – it’s kind of embarrassing to me now, because of the juvenile prose and attempts at sounding profound and worldly.

Although email is one of the Internet’s oldest tools, I never thought of email as a desirable form of communication in my teen years. More than anything, it was restricted to my interactions with adults and institutions. I rarely checked my email other than retrieving login credentials for a website, or to get information for a school assignment.

The Virtues of Social Media Tools

Today, however, as a Hip Hop DJ at my university’s local radio station, my Inbox has become like a DJ’s crate, where new artists and their managers can easily send me their music. As I transition into the workforce, I find myself communicating through email more frequently, and I am having to learn email etiquette in a professional setting.

I would say that Twitter and Facebook have helped me to be more clear and concise. They probably aren’t the breeding ground for the Charles Dickens of my generation, but they shouldn’t be discounted, either. Twitter, in particular, is teaching young people potent communication by strengthening brevity and wit. Even broader, I’d say that social media apps have helped young people improve their writing skills, and their overall communication and socialization skills, because Facebook and Twitter compel us to write and communicate outside of the classroom.

As I reflect on my own digital media skills development, I believe it’s more important for institutions and organizations to pay more attention to a person’s specific skills and literacies rather than age or generation. I also am convinced that a person’s home environment, cultural experiences, and vocational success – more than any single demographic factor – will likely form their interests and skills in the digital world.