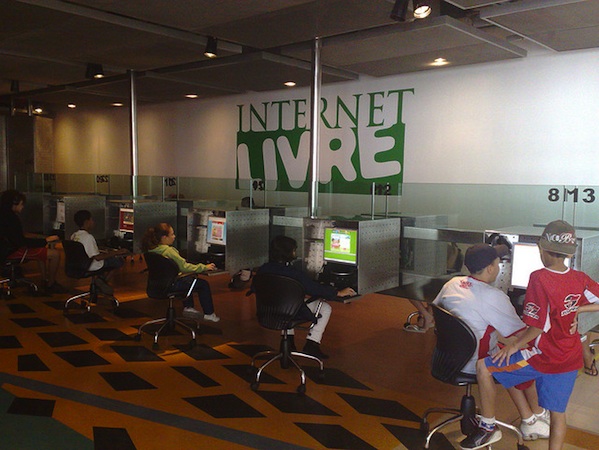 Last year, Rio de Janeiro saw the birth of a new type of battle in the streets of the favelas: the “Small Step Battle.” In this battle, hundreds of kids and teenagers from the poor parts of Rio are fighting with a major weapon: dance steps. Everyday, kids are posting videos of themselves performing creative and often very difficult ‘funk’ dance steps on YouTube. These videos are now a fever: some have millions of viewers. The battle is on and these kids are challenging others to create better (and often, even more difficult steps) to dance ‘funk’. Funk is a type of music from the poor communities of Rio, strongly inspired by hip-hop. As the “small step” has become more popular, more and more kids have become interested in the dance, mixing different styles of dance, such as frevo, ballet, samba, modern dance and others.

These new dances and performances caught the attention of many, including writer and producer Júlio Ludemir, who, along with musician and producer Rafael “Nike” Soares, created  a competition, the “Small Step Battle.” The idea was to promote a dance event among the young and anonymous dancers in the poor communities of Rio.  Ludemir is an enthusiast of the “small step,” arguing that the young dancers are creating a new and highly complex cultural trait. “They are mixing different types of dance, creating. It is maybe one of the most sophisticated productions I have ever seen; the aesthetics are exquisite,” he says. According to Ludemir, the “small steps” craze is an example of how youth can be protagonists in creating and changing culture. The internet has played a huge part. “These youngsters are using the internet to connect themselves with the world,” he says. “They are appropriating YouTube to show their ability, looking for visibility and popularity, researching for new steps and seeing what others have done.”

In September 2011, Ludemir and Soares promoted the first “Small Step Battle” with more than 180 competitors of all ages, mostly, teenagers. The contest took place in several communities in Rio and culminated with a dramatic final between two amazing contestants.

To Ludemir, the “small step” movement is changing lives. “They [the teenagers] have to be healthy to do such hard and difficult steps,” he says. “If they drug themselves, they cannot perform the ‘small step’.” In fact, some of the movements are so complex the dancers have to work several hours a day to master them.  When they finally put their videos on the internet (usually done in their own homes with friends), they expect to find recognition and support. And they usually do.  And that’s why the “small step” is changing the way people see dance in these communities. “To many, it was just vagrancy,” Ludemir says. But, with the media coverage, many of these teenagers are now working with producers and celebrities. “They see themselves as artists and they want to stand out,” Ludemir says.

A Culture of Peace

The “small step” is also changing the views on ‘funk balls’, which are usually strongly associated with explicit sexual lyrics and dance and the drug cartels. The “small step” is inspiring a different  kind of funk ball, where the dances are the most important thing. Ludemir says this is because the dance is about a culture of peace and not about violence. “We were in one of these balls (with) more than 150 teenagers. And not one single violent act,” he says. “The dancers just wanted to show their talent.”

This year, Ludemir and Soares intend to keep promoting the competition. “We want to promote a contest within the 23 UPPs (Pacification Police Units in the Favelas of Rio) in March,” he says. The idea is that, through dance, the social UPP units can reach youngsters and open the dialogue with them in the pacified favelas (The term ‘pacification’ refers to a movement by Rio’s government to take control of the hills and favelas of Rio de Janeiro and out of the hands of the drug cartels). Ludemir also wants to produce workshops to help the young dancers increase their skills and repertoire, and learn new aesthetics.  More videos of the “small step” dance: