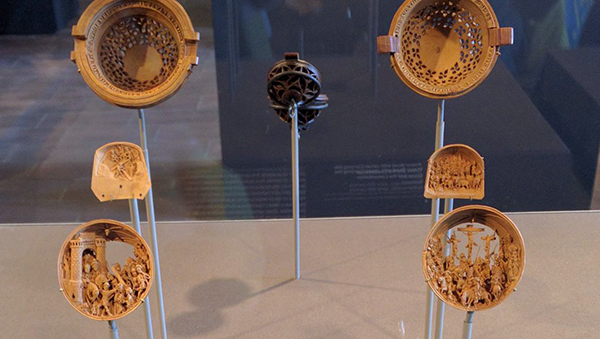 The hype around virtual reality (VR) has died down a bit, though the conference keeps going. I was happy to attend the Versions conference earlier this year, though I was disappointed (but not surprised) that there wasn’t that much new stuff. Rather, it seems there is less happening than there was before as the medium continues to figure out what its best use cases are if it is to become a consumer technology.

Since last year, I’ve learned that, for me personally, I prefer room scale VR to other experiences. The ability to move through space makes it more engaging. I am dismayed that so many experiences attempt to recreate reality rather than design something fantastic and out of this world. Additionally, I am still looking for the amazing educational content that I think might come from the medium.

I’ve had two VR learning experiences this year that I think are worth sharing. One was at a museum. The other was with students. 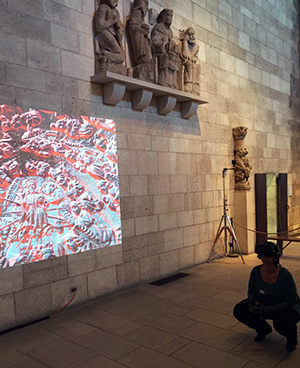 Ana Serrano (@acserrano) the chief digital officer at the Canadian Film center reached out to me to come and see a VR installation at the Cloisters Museum. Currently, Small Wonders: Gothic Boxwood Miniatures is on display. These small wonders are intricately carved wooden prayer beads and they are absolutely amazing. Like most things at a museum, they sit behind glass cases. Given their size, viewing them is difficult as people crowd around the glass cases, trying to get a good glimpse at these palm sizes (and smaller!) little wonders. I could not imagine someone’s hands making so much detail on such a small object yet there it was in front of me. And, then, I had to move on so someone else could see.

This, of course, has nothing to do with virtual reality, save for a small temporary exhibit that was set up upstairs at the museum. High resolution 3D scans had been made of one of the prayer beads, layer by layer. Using an HTC vive and the type of space you normally only find at museums, people were able to, one at a time, experience the prayer bead, enlarged to human size. Suddenly, the tiny details that were missed were not only in your face, but viewable from all angles. An exhibit that was hands off engulfed the viewer who could manipulate their position in the bead and also change the view, from seeing the bead put together to having the carved layers expanded out. You could walk through the bead and just experience a more complete version of the awesomeness of these little objects.

In addition to trying this experience, I also spent a lot of time watching people as they experienced the bead. They were in awe. Often there with family, they would watch as their family members experienced the bead and laugh at the moments of awe. Those who saw it before someone else would try to give directions on what the person should do to share their favorite part of the experience. It was really fun to watch. My favorite thing though, was hearing almost everyone who went through this who had started at the exhibit of the actual beads say “we need to go back downstairs and look again.” The VR experience created an intimacy with the objects in the museum that normal viewing often loses when objects are so close but so far away when they have to exist behind ropes and glass cases. For the viewers, the VR experience seemed to ignite a desire to be with the actual object that opened up the possibility of learning and/or observing more than just being next to the object did (I also spent quite a while watching people go through the exhibit of the objects and watching the informational videos).

At my college, we have a few peer programs that exist to help students and faculty have meaningful engagement with technology in the classroom. I’d gotten my hands on a computer capable of running VR and an HTC Vive and I set it up in a room with enough space to have a playable VR area (the museum was an ideal place for VR because the space is big. It was nearly impossible to get a good set up in a space where students gather). I had a group of 10 students who are digitally and technologically inclined try the Vive. They had an amazing time. There was a lot of laughter, and fun, and teasing, and being awed. They were able to intuitively figure out how to use the technology (the person who took the longest to figure out how to use it still took less than two minutes).

Now, this is not a normal group of students. This is a group that supports the use of technology in learning. They are keenly aware of all the different technologies being used in the classroom, and how they are deployed. Each of them left with one question, “What does this have to do with learning?” Watching them, I sort of agreed. The inability to invite people to your experience limits the usefulness of VR in learning in traditional classroom settings. It is useful, however, for getting students to learn to describe mediated experiences for themselves and others.

One of the benefits of having classes with others is you are going through a learning experience, a world creating experience together. In terms of how digital tools operate, VR forecloses that type of bonding in various ways. The social VR spaces, though social, are so avatar and digital object driven, so visually and shared time/virtual space driven that it forecloses some of the asynchronous text preferred possibilities of other digital technologies and platforms. In the museum, it was a bit of a drawback that only one person at a time could view the bead. The ability to have multiple headsets might exist in the future. But, you need space for that. Even then, it will only make sense for a few people at a time to experience something. And, the benefit, at the end of the day, seemed to be you experienced something that was real inasmuch as you could go and see what you saw after with a new appreciation. In the classroom I am not sure it will be as useful in terms of deepening understanding at a large scale. For smaller, specialized classes, maybe it will work.

An Experience to Explore

For those who have headsets at home, there is one learning VR experience that I was awed by. It is called Eye of the Owl. Like the VR small wonders experience, this app allows the viewer to go into the Bosch painting The Garden of Earthly Delights. There have actually been a few VR apps that explore this painting. This one though, is simple. You are in a cathedral, and then a studio, and suddenly you are in front of this painting, tiny in comparison. You can zoom in on some of the more detailed scenes and just take them in. It is very simple, but very effective, sort of like the prayer bead. The amazingness doesn’t come from an elaborately constructed experience. Rather, the ability for the viewer to be consumed by the digital object, rather than consuming it, change the perspective, approach, and intimacy with the object that opens up different lines on inquiry.