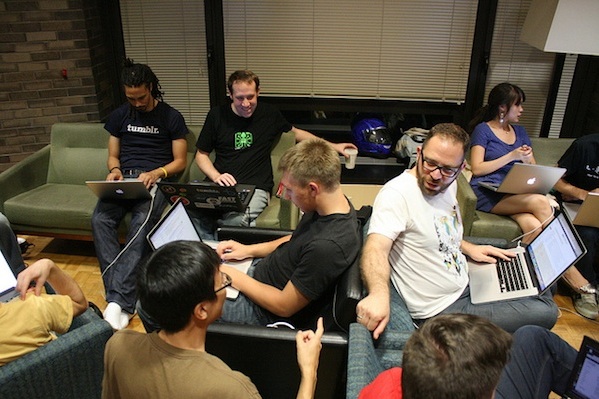 Computer code is rapidly becoming a mature part of contemporary collective life. Commonly understood as the instructions that act on software and computing machines, code itself is now however becoming a significant focus for social scientific research. Yet the specific influence of code on learning remains only barely researched. So how might we think about researching how computer code acts to configure learning?

Rethinking Code
Code is the language of computation; it instructs software how to act. But as the instructions written down in code travel out into the world, organized in the algorithmic procedures that make up software, it also has a significant influence on everything it touches. The result is a profound softwarization of society as software has begun to mediate our everyday ways of thinking and doing.

For example, software and its constituent codes and algorithms have become a metaphor for the mind, for ideology, for biology, for government, and for the economy, and with the rapid proliferation of software as an interface to the world, code has been seemingly naturalized in collective life. Computer code has also been described as a kind of law, or the set of rules and constitutional values that regulate the web. The idea that code is law suggests that choices about how to code the web will define the controls and freedoms that are built or programmed into it.

These ways of looking at code demonstrate that code is much more than a language for instructing computing machines. Instead, we need to understand code as a system of thought that spills out of the domain of computation to transform and reconfigure the world it inhabits.

Code Acts
Moreover, code is not just a channel for mediating and augmenting existing social forms and structures. Code acts. It does work in the world. And it interpolates, mixes with and ultimately produces collective political, economic and cultural life. Albeit unevenly and often invisibly, code is woven into the substrate of contemporary society as a mass-produced set of instructions with the power to act at a distance to shape how people think, act, and live their lives.

That is to say that software and society are in a symmetrical relationship, each structuring the other. Code introduces algorithmic processes into cultural, political and economic existence, soliciting and inciting people to do things and animating, patterning and coordinating everyday life. It acts as a layer of personal perception, sensation and transaction; constructs for us new capacities of communication, memory, sense, touch, reach and interaction; crystallizes new social formations and collective belonging; reconfigures and re-orders the spaces we inhabit and the things we touch; and produces new forms of algorithmic identity.

Software Studies
Yet despite its densely interwoven and infrastructural place in collective life and its reshaping of individual agency, how code comes into existence, how it is written, who produces it, how it works and what it does when it is set in action remains largely invisible, unquestioned, and taken for granted. As a consequence, the problem of computer code is increasingly being treated as a significant avenue of social scientific investigation.

Researchers involved in software studies—the social scientific analysis of software in all its social and technical aspects—have begun to adopt some approaches and methods  which could help us to understand the “softwarization” of learning too.

Coding Acts
By focusing on the social politics and culture of software, researchers are increasingly alert to the genealogical histories that lie behind the programming of any software product, and to the social and cultural lives of code as it is written into existence. Code is a product of the world. By studying the coding acts that produce it, software researchers are inquiring into the historically particular acts of programming, prototype development, user testing, business development, R&D, fundraising, negotiations, arguments and compromises that produce any software application. The emphasis is on software as the product of coding acts, on how it is programmed, written and developed as lines of code, including how its programming is shaped by political, economic and cultural forces.

Do we have similar studies of the social politics of educational software? Or of the cultural lives of the computer codes that structure learning in increasingly connected and networked environments? As more and more of what we understand as learning takes place within socio-technical landscapes dense with code, it is becoming important to understand the politics and economics that have brought such environments into being, to excavate their genealogies of development, and to analyze the forms of thought and action that they either catalyse or foreclose.

Key questions here might include: How are instructional technologies planned, funded, developed, marketed, and disseminated? What are the secret lives and family trees of educational databases and learning management systems? And what were the alternative possibilities that were proposed, argued over, and rejected or shelved?

Coded Spaces
Another key insight from research on software has been provided by geographers, whose studies have shown how code creates new kinds of spaces for participation in everyday life. Coded spaces, or code/space, consist of those spaces and places which are thoroughly augmented by software. An airport is a paradigmatic code/space. Without the codes and algorithms which operationalize all of its logistical, security, surveillance, communication, and air-traffic control systems, and so on, an airport simply cannot function as an airport. Therefore, as code increasingly spills out of computation into the world, space itself must be understood more and more as the product of code. The spaces we inhabit, such as our homes, schools and workplaces, the places we go, such as shopping malls and leisure facilities, and the transport we use to go between them, are increasingly animated, automated, regulated, controlled, managed and made functional through code. Code transforms, or transduces, space, and consequently contemporary society is made up of complex software-sorted spaces that transduce social practices of all kinds, including those of education.

What then are the software-sorted code/spaces of learning? Certainly if we consider learning in the networked spaces of the web, then we need to understand such learning spaces and the publics they generate as produced by code and the transactional exchanges, digital switches and interactions it makes possible. If we look to more formal learning spaces and publics such as schools, colleges and universities, too, we can see these as highly coded spaces. Our learning institutions are full of coded devices and technologies, including instructional software, library catalogues, and learning management software—as well as the more mundane but no less significant applications of word processing, spreadsheets, presentation software and so on—that transduce educational space and make possible new kinds of practices. Our schools and universities are also the product of coded infrastructures that are spatially stretched across extended networked architectures to make complex webs of interactions and transactions possible.

At the same time, educational institutions of all kinds are ever more interwoven with vast databases which capture, process and compare all kinds of performance and surveillance data, whether at the individual, institutional, regional or national scale. These data are then wired back into educational practices, institutions and policies. Perhaps the most visible example is the Programme for International Student Assessment (PISA), a policy technology that codes and compares the educational performance data of both children and nations globally. These kinds of highly coded technologies are now interwoven with the organization and arrangement of educational institutions, as well as with the discourses of education policies.

Coded Discourse
Much of the influence of code is made possible by a steady proliferation of discourses which promote the deployment of software across many domains of contemporary social, political, economic and cultural life. These discourses are persuasive and powerful. They legitimate, justify and work to persuade people to believe and act in relation to the algorithmic systems of thought associated with software, and to imagine the world according to the representations made possible with code. For example, the datascapes of social network sites have begun to redefine what we perceive to be the nature of collective belonging—to redefine society itself, albeit according to a crude social architecture based on database management techniques.

The discourse of learning today is becoming dominated by a particular coded style of thinking. As a way of thinking about education, it is saturated with metaphors and images of information and communication technologies, networks, feedback, interactivity, connectivity, open source, virtuality, innovation, simulation, and flexibility. This discourse makes education intelligible, thinkable and practicable in new ways. For example, it legitimates the idea of open educational methods, professional networking, distributed leadership, decentralized curricula, and new styles of nodal governance through cross-sectoral policy networks. These are taken directly from the discursive repertoire of software, code and algorithm, and the systems, logical structures, and ways of thinking and doing things that they underpin and naturalize.

Coded Acts
Finally, what are the new pedagogic acts programmed into existence by code? The programmable pedagogies of our softwarized world are highly coded acts that are algorithmically assembled into contemporary collective life, thought, identity, space, publics, and discourse. Understood as the programmable public pedagogies of our present, code is partly conditioning who we are, and the kind of beings we take ourselves to be. This makes it essential, I think, to put code, algorithms, and software at the center of efforts to research digital media and learning, whether we are looking at the learning going on in highly coded digital environments and networked publics, or whether we are looking at the increasingly coded spaces of our present day educational institutions and the pedagogic practices they make possible or close down.

Although an attention to the technical fact of computer code itself, and to the micro-detail of what its programming says and does, is important to this work, it’s essential not to reduce code to a mechanical process. Instead, code ought to be understood at a more general macro-level as a system of thought with a complex set of social, political, economic and intellectual histories; as a cultural product and a cultural actor, alive and evolving in the world. In-depth studies of code acting at both macro and micro scales will allow us to better understand how code acts to condition learning, and besides this to analyze how code acts as a public pedagogy to instruct and configure present-day ways of being, thinking and doing.