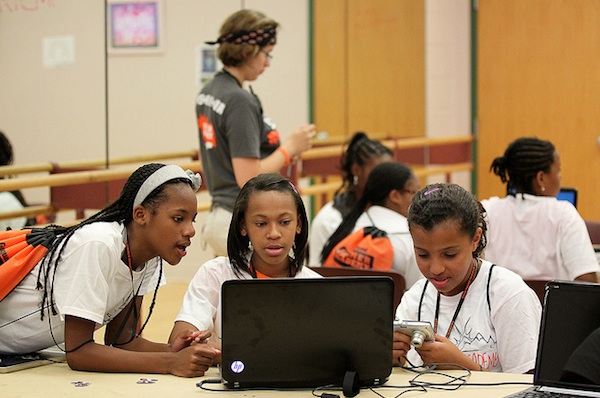 How should we understand the part played by code in digital media and learning? We are accustomed to arguments that digital media are affecting our existing practices of reading, looking, seeing and hearing, yet relatively little is said of how the underlying code and algorithmic architectures of software actually exert those effects. The work done by code and algorithmic architectures in remediating learning through digital technologies, however, should be treated extremely seriously. Code increasingly affects our notions of agency (who does what), and sociality (how we form attachments and collective belonging). Code is woven into the substrate of contemporary society, as a layer of our perceptions, sensations and transactions, and it crystallizes new social formations, publics and groups. Code is both hidden yet insistent, and for that reason the way it is interwoven with learning through digital media is a crucial contemporary concern for us all.

We live in worlds increasingly interwoven with code. Code puts into operation the apps and communication channels we increasingly depend on in everyday life; it twitters away insistently in our pockets in our portable devices; it channels the personal data, interests, and relationships that we include in our social network profiles; and it aggregates us into vast database architectures, powered by database management techniques, as a million little informational bits, in order to offer us new services, recommendations, and experiences. Without really thinking about it, we are spending vast amounts of our time doing stuff with code.

Although for most of us this coding goes virtually unnoticed as processes hidden at a distance in the background of our mundane daily routines and rhythms, it is not without deep consequences. For example, the World Economic Forum is serious about turning our personal digital data into the “oil of the internet and the new currency of the digital world.” This means using our tweets, web searches, texts, emails and locational coordinates to support new value-making business models, to derive new governmental models of public service delivery, and to create free, personalized consumer experiences. How code is put to work on our personal data to bind us into vast data structures will be a global topic with personal, political, economic and cultural ramifications for years to come.

It is hard not to see such developments as part of a trend where people are treated as highly coded gadgets, “computer peripherals attached to the great computing clouds … the big new computational object that is bigger than us.”

This makes it important to view code not just as a physical fact of lines of code, or algorithms merely as operational procedures and architectural data structures, but as computational devices that make things happen in terms of human action and social relations. Code is not just a language for machines to read. Increasingly, as code flows into our world through our desktop, handheld and networked devices (and particularly through inter-device interactivity and convergence), it acts as a template for contemporary life, creating “new landscapes of code” and structuring and patterning what we do and how we relate to one another. It constructs for us new capacities of communication, memory, sense, touch, reach and interaction. To use a memorable expression, code works by “configuring the user.”

Before this is misinterpreted as technological determinism, with code seemingly acting as a dominant alien force upon passive human victims, I ought to point out that I am drawing on theories of technology which understand it as being in a symmetrical relationship with society. That is to say that technologies are constructed by humans acting in social relations (ie by professional computer coders, within organizations, within the field of CompSci expertise), but also that those technologies act upon humans and social relations, constantly reshaping and reconfiguring them. This is what is meant by the term “sociotechnical.” Technologies mirror our society, embodying a complex interplay of political, technical, personal, economic and professional factors.

Taken as sociotechnical artefacts, computer code and algorithmic processes should, then, be understood as “productive” technologies that participate actively in social activity, or as “agents” that disclose standards of human conduct and instruct us in how to think, feel and act. This is the perspective on code and algorithms now being offered by serious academic researchers of software and sociality. The datascapes of networked technologies have, in a quite serious way, begun to redefine what we perceive to be the nature of collective belonging—to redefine society itself, albeit according to a crude social architecture based on database management techniques.

These insights disrupt our common-sense notions of what constitutes agency. Code may even shape processes of identity formation, with a “new algorithmic identity” being produced through the mathematical algorithms that operationalise databases, such as those that lie behind search engines and social network sites. When the daily fact of our existence is distributed in networks of “html pages linked to other html pages” it is difficult to conceive of ourselves as individual actors. We are defined by our networks; we are not above them or outside of them. In a sense, in this highly coded universe we are becoming little more than breathing data transactions and aggregates.

The implication for practice and research in digital media and learning is to begin to understand how coding, algorithms and software are involved in reconfiguring learning and the learner.

Colleagues of mine have recently begun to write of the “hidden curriculum of code,” and I’ve been exploring the related idea of “programmable pedagogy”—the lessons taught by coded devices and environments. In educational sociology, the hidden curriculum refers to what is not intentionally taught at schools. It consists of such things as learning to be obedient, following rules and standards of conduct, and arguably extends to learning your future position and potential in the existing social order. In this sense, the hidden curriculum helps shape learner identities—who learners think they are, and where they think they’re going in the future. Similarly, I use the idea of programmable pedagogy to denote the forms of conduct, knowledge and practice which are written down as code within technological devices and systems. Exploring the hidden curriculum, programmable pedagogies and the secret lessons taught by code therefore queries the assumptions about knowledge and learners that are embedded in digitally mediated learning practices.

How might such programmable pedagogies of digital media exert effects on learner agency? As learning has migrated into coded digital media environments it has become harder to attribute agency and social action to individual mental states. In networked and open environments, the question of who does what and where social action originates from cannot be attributed to the intentions of an individual. This does not just mean that social action is now distributed as collective agency among networked human users, but that agency is thoroughly hybridized as an interactive mosaic of relations between people and machines, social codes of conduct and computational codes. Indeed, computer code embodies conduct, specifying particular ways of acting, feeling, seeing, and thinking. We receive code, which instructs us to execute particular actions. Code and algorithm in part reconfigure, coordinate and modulate agency for us.

The learner interactively moving among these relations between human and non-human things, then, is continually being instructed and solicited through code to do something. The idea of individual learner agency is hard to maintain in this human-technical hybrid of coded learning. Instead, the learner is being coded and configured and algorithmically operationalized for a world in which human-machine interactivity is increasingly the norm.

Moreover, since we now inhabit a universe of social media, how might the programmable pedagogies of digital media affect the formation of social groups? The notion of networked publics describes the formation of social groups that are restructured by networked technologies. These technologies and the coding undertaken to operationalize them configure new possibilities for interaction and participation. Persistence, replicability, scalability and searchability are some of the well-known elements made possible by the coding of social network sites. It is within such networked publics, empowered by the affordances of persistence, replicability, scalability and searchability, that much learning with digital media is now said to be taking place.

Yet these categories treat social media as somehow separate, disembedded and virtually distinct from the ordinary world of social, economic, political and cultural processes. In fact, rather than being understood as “virtual” or “digital,” in contrast to the plain old “actual” or “analog” world, social media are intimately interconnected with existing social forms, institutions, structures and processes. Code and algorithm enter into intense and inseparable relations with the real world of social activity. In other words, the virtual is real. What this alerts us to is how the coding done to activate learning through social relations in networked publics need to be understood as exerting force upon other existing social relations, structures and forms, not as somehow outside of them.

The programmable pedagogies of digital media in this respect transform and redistribute both agency and social relations according to the standards of code and the architectural structures of algorithmic procedures. In social media and Web 2.0 environments one of the main ways that this is done is through relational database management techniques which sort, classify, filter, aggregate and organize data into structures. Google, Amazon, Facebook and so on are all examples of immense database architectures and data management techniques working in precisely this way to reshape agency and social relations. What is particularly significant is that they appear to be based on user-produced or user-generated content, which in turn allow them to offer personalized recommendations, suggestions, connections and invitations. They appeal to our sense of individual human agency and social belonging.

What is more, these technologies are coded in such a way that they appear to be smart enough to ‘learn’ from us. Coded up with interactive awareness and capacities, they are increasingly able to second-guess our decisions, remember our interests, extend our social affiliations, and make up our minds for us. What we are seeing, then, is the birth of a new kind of learning environment in which there is an increasingly symmetrical interactive pedagogic relationship between human learners and computationally coded ‘intelligent’ devices that can also learn, that can think for themselves, and that increasingly can think and speak on our behalf. Who, or rather, what, is the learner, and who or what is the teacher in such an interactive environment?