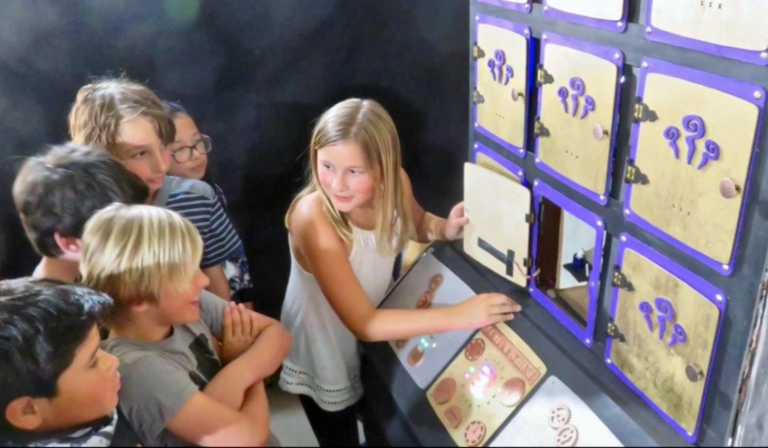 To maker-educators Fabrice Florin and Edward Janne, maker ed is not just about the technology: “the real power comes from enabling students to build their own projects, combining art, technology, and storytelling,” they insist. Although neither Florin nor Janne had previous training as educators, both are more than sufficiently savvy in multimedia storytelling. Florin was one of the founders of Apple’s Multimedia Lab (the Wikipedia page for the lab is a stub — someone should fill it out), which produced, among other pioneering explorations, Life Story and Moss Landing, which turned out to be prototypes for the kind of digital storytelling that emerged on the web more than a decade later. Florin also founded Videowest, which produced music videos long before MTV, and Newstrust, a nonprofit attempt to crowdsource an online guide to good journalism. Janne is no stranger to multimedia storytelling himself, as software engineer and 3D animator. Together, they have been “creating magical worlds with children in lower and middle schools,” from Halloween haunted houses and cities of the future to kid-designed “time machines.”

For these educator-tinkerers, inexpensive and powerful technologies such as LEDs and microcontrollers can bring exciting effects and technical learning to students’ projects, but the tech is always considered in the context of pedagogical goals of encouraging students to engage passionately in their learning, to collaborate, to gain confidence in their ability to learn new skills, and to work on projects that matter to them. As Sylvia Libow Martinez put it, “making is a stance toward learning.” According to Florin, “we have observed that art combined with technology has broader appeal than simply making projects with technology alone.” In their experience, “we also end up with more girls in these classes than in pure technology classes.”

Florin and Janne start not by introducing the technology or the art, but begin by engaging in conversation with students, drawing them out about what kind of projects might enlist their passion. Halloween is an easy example – what kids don’t want to create a haunted house? Florin started experimenting with the concept at the local library, showing kids how to make “Halloween wonderboxes.” He and Janne met at their (our) local makerspace and decided to make the Halloween workshop with the local Lycee Francais more collaborative by creating a “Haunted house” with spooky creatures that light up and move.

Janne designs and fabricates inexpensive parts with thin plywood by using 3D design programs and their maker-space laser cutter. Using Arduino microcontrollers and inexpensive sensors, the pair created a “Robot World” workshop. As with their other projects, Florin and Janne left it to their students to decorate their creations as well as assemble them, and, as always, encouraged them to collaborate on a shared narrative to frame their work. Although Florin retired in 2015 from his last position at Wikimedia Foundation, he and Janne consider themselves to be at the beginning of their journey as maker-educators. This video interview with the duo is brimming with their enthusiasm for igniting curiosity and sheer love of learning with their art-technology-storytelling workshops and classes.