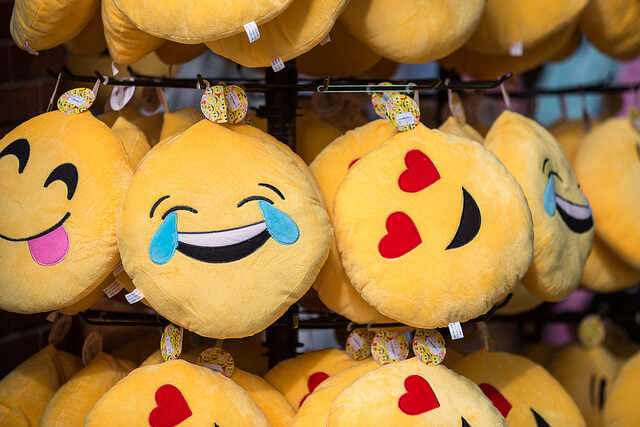 Over the past year and a half, I have been working closely with a group of researchers and teachers in Northern Colorado on a co-designed curriculum project called Compose Our World. While there is plenty to share about that project at a future date, today I want to talk a little bit about composition practices within our online communication tool, Slack. Specifically, I want to talk about “reactions” within the platform.

While many readers may be presently using or are familiar with Slack, what I most appreciate is how seamlessly it moves communication from text to image and back. A bit of background: Slack is essentially a series of private and public channels for your team to communicate, collaborate, and share information (imagine a couple dozen online chatrooms happening all the time and you get a loose approximation of how Slack can function). Like other teams using Slack, ours is one with its own cultural practices: GIFs, assorted memes, and other miscellany add to both the “noise” of online communication and to its possibilities for personalization.

When an individual writes something within Slack, participants can respond with a “reaction” rather than with text. Frequently, our group uses this for coordinating meeting times and to ensure everyone is on the same page for instructions. It isn’t uncommon to see a question like “Can I get a high-five if the meeting next week works for you?” followed by a series of hands, wayward thumbs-ups, and whatever other icons participants choose to use. It is a quick visualization of synthesizing and responding to information in a way that is different than written text.

In a discussion revising curriculum and the role that remix can play in 9th grade ELA classrooms, collaborator Bud Hunt and I had the following exchange: 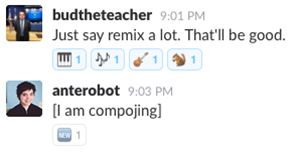 To interpret, I responded to Bud’s statement with four emoji: a keyboard, music notes, a guitar, and — obviously — a squirrel. I explained (in text) that I was “compojing,” which Bud responded to with the “new” emoji icon. For the purposes of this post, I’m going to define my entirely made-up word as the process of composing with emoji. Whether in coordination with print text or through making meaning by sequencing varied emoji together, compojing highlights what text can mean in the multimodal landscape of tools like Slack, the GIF-happy world of Twitter, and the miscellaneous text messages shared with friends and family. Like traditional text, the emoji I use to compose and the order in which I do so are open to interpretation and can be misread and misconstrued. Our language choices — whether Standard English, slang-filled vernacular, or image-centric emoji — matter.

On the track “Facts” on his recently released The Life of Pablo, Kanye West raps that “Kimoji just shut down the app store” before bragging with the lyrics above.

I’ll be honest, as someone who has thought critically about what Kanye’s work means in an era of participatory culture, I have forked over for the privilege to use the often NSFW Kimoji images. Nothing says, “thanks for understanding and being flexible with your schedule” quite like a panda, a mid-grunt Kanye, and a heart-shaped pizza: 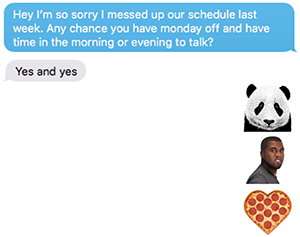 Emoji, like language, can be tied to larger power structures. While I enjoy surprising friends with the silly emoji I’ve purchased, I am also reminded that someone profits from my use of these new tools for composition. Like the discussion within a recently published history on digital word processing, emoji are tied to larger histories of digital production and power.

Further, as emoji have moved toward more inclusive skin tones, I am reminded that my compojing is limited by the choices of the authors of these emoji. Earlier this summer, Apple announced that it is replacing a gun with a water gun in its featured emoji. Taking a critical media literacy stance, we must question who profits and who produces emoji for what purposes.

Like the Kardashians’ ability to unleash their own custom emoji on the world, I, too, have authored my own emoji. Over the 18 months of the Compose Our World team’s regular Slack use, I’ve introduced a handful of emoji for our group ranging from Admiral Ackbar (obviously for when we must warn that something is a trap) to the Prince symbol while in the prolonged process of iconic mourning to (inexplicably) Orville Redenbacher. These emoji allow our team to communicate in ways unimagined by Slack’s emoji designers and highlights that compojing could be more than simply writing with emoji; it could include writing the emoji themselves.

As the world of digital resources expands how we communicate, compojing highlights that such practices are still constrained by individuals in power. Whether they dictate the images we use and for what purpose or they profit from our choices to endorse their vernacular toolsets, emoji producers make more visible the invisible lines of power underlying all language.