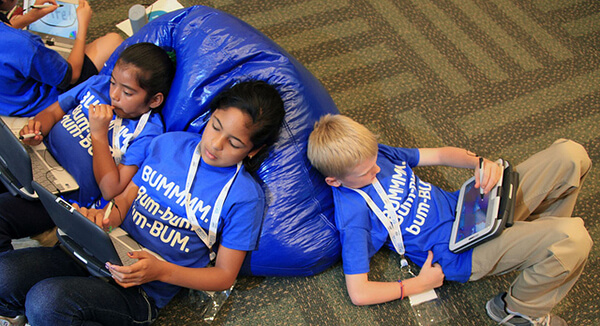 I raised a millennial who is now in her 30s. We dealt with the fact that she did her homework while engaging in multiple instant-message conversations and watching television in the background. Her response: “When I stop making straight As in school, maybe it’s a problem.” I’ve talked a lot about my conversations with my daughter about “crap detection” and search engines, which were just coming of age around the time she started using them for middle school research. In those olden days of the early 2000s, smartphones, SnapChat, Facebook, Instagram, weren’t issues. The territory is a lot more complicated today. Many parents fear that their children are more technically knowledgeable than they are. It’s one thing to talk about the birds and the bees with children who are, presumably, less sophisticated about sexuality than their parents. That’s not necessarily true of the facts of life online.

Without a doubt, kids are as fascinated by screens as their parents these days. I vividly remember waiting for an elevator in a hotel recently. A parent wheeled their child – 3 or 4 years old up to the elevator door. The child was deeply engaged in some activity on a handheld screen. We entered the elevator when the door opened. The child looked up just long enough to punch the elevator button for their floor, then returned to rapt concentration on her screen. And what parent or other traveler has not been thankful for the toddler-quieting effects of a gaming machine or tablet during an airplane flight? But, this is all new, there is a lot of moral panic about digital media and youth.

How should parents regulate screen time for their kids? Certainly this is one of the big questions facing families of all kinds today. The word “should” is an immediate roadblock to the kind of conversations families ought to be having around this issue, according to Constance Steinkuehler. She ought to know — she’s Professor of Digital Media at University of Wisconsin, Madison, and co-director of the Games+Learning+Society Center at the Wisconsin Institute of Discovery (and she will keynote DML2016 in October in Irvine). She’s also a mother of two young children. She’s not opposed to regulating screen time, but Professor Steinkuehler thinks we all ought to zoom out a little and think about the multiple contexts of this kind of conversation. Gender and class issues, for instance, are implicit but rarely discussed. She thinks they ought to be. For example, Dr. Steinkuehler suspects that some conversations parents have about rules around screen time are class displays of high status — when both parents are working, they have far less leisure for enforcing such regulation. And often, such conversations focus on what moms ought to do.

She isn’t saying that conversations about screen time should be avoided, but suggests that “ought” conversations would be more valuable if they were focused on what forms of screenplay are valuable and why — and what forms are less valuable, and why. And if you, as a parent, are unfamiliar with the media your children are using, that is the opposite of an excuse for avoiding the conversation: “If you don’t use a medium yourself, that doesn’t excuse you from parenting about it.”

Steinkuehler’s specialty, game-play, has gone through periods of moral panic and hype about “gamification” of learning. Now that the hype curve has given way to backlash, and the backlash has started to die down, she thinks the best work on games, screens, and learning is being done. Dr. Steinkuehler grew up on a farm and recalls that her parents feared that she was spending an unhealthy amount of time reading books. And, boomers apparently ruined our minds with (now old-fashioned) television. Clearly, there are pitfalls and opportunities in screens as entertainment and education devices. Steinkuehler’s primary concern is that parents have broadly situated conversations with their children. She details her findings and her feelings as a researcher and a mother in this 14-minute interview.