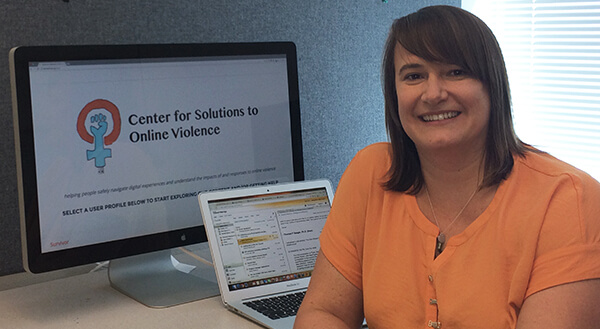 As web materials for the Center for Solutions to Online Violence go live this month, at DML Central we are continuing to run profiles of those who participated in the DML Competition 5 Trust Challenge. By focusing specifically on trust issues, this series of grant opportunities was designed to address the continuing presence of serious obstacles to digital participation that go beyond access to technology and consider the role of systemic bias or suspicion. Rather than adopt a one-size-fits all approach to bullying and stalking, the CSOV offers those seeking information about combatting internet misogyny and racism a customized set of resources tailored to the specific needs of victims, educators, and offenders.

This time, we are focusing on the principal investigator for the Center for Solutions to Online Violence project, Professor Jacqueline Wernimont of Arizona State University. For other interviews with CSOV members, see previous DML profiles of Moya Bailey and Seda Gürses.

As we have with the other CSOV team members, we started our set of questions by encouraging Wernimont to reflect upon her earliest experiences with computers and how her personal history might have shaped her professional attitudes toward digital media and learning. She recalled “playing Where in the World is Carmen San Diego in kindergarten” and “science and technology gifts” from her mother, who is a health scientist and her father who is a psychologist, but didn’t recall “any programming or even discussion of coding in any of this.” In her position of relative privilege, she had “lots of curricular and extracurricular experience with medicine, basic engineering, mathematics (often with an artistic bent) and playing games on computers,” although “developing, programming, or tinkering for/with a computer wasn’t even on my radar” until after she completed college as an adult. “But, my sense of confidence approaching the practices and issues is very likely rooted in those early years when I was supported in playing with machines and experimenting.” As a parent, Wernimont has been enthusiastic about offering rich digital literacy opportunities to her own children and avoiding gender bias in what she makes available to them. “I’ve been really excited to bring robots and toys home to use with my 2 and 4 year olds.”

In taking a developmental approach to digital literacy that is situated in users’ individual histories, Wernimont lauds other team members and praises collaborating with DML enthusiastically. “The work on the DML-funded grant to develop the Center for Solutions to Online Violence, both as a distributed community and as a set of resources, has been transformational for me. I’ve learned an enormous amount about engaging with amazing content creators, artists, and community activists. With respect to online violence, I have come to see even more clearly how women of color, trans people, and people outside of academic structures are at greater risk than those of us in more privileged positions.”

While terms like “misogynoir” that characterize how intersecting identities impact experiences of abuse are only coming into the mainstream public parlance now, thanks to popstar role model Katy Perry appropriating the term from digital educator Moya Bailey, Wernimont is eager to acknowledge a longer history of intersectional thinking and the importance of crediting Bailey and other seminal figures. “I’ve also learned a great deal about the ways that well-meaning but largely ignorant people with privilege can just wreck havoc in trying to help. I take very seriously that it is my responsibility to educate others in the academy about the differential harm in online spaces and to help elevate the experiences and voices of people who are often least safe but the most brave.”

Wernimont also laments “the challenges that institutional structures create for this kind of collaborative work,” because it can be “remarkably hard to manage both the emotional and practical side of a collaboration that brings together senior and junior scholars, alt-ac professionals, content creators, and community advocates.” She notes that the project team includes “several really important people who have first hand experience with a variety of forms of online violence,” who “brought spectacular insights about the harms women face in the gaming world or that women of color experience, as well as the risks to trans communities.” According to Wernimont, it “simply isn’t possible to develop responses to online violence without a variety of experiences and social positions, so our larger community had not only to be broad but also had to really put the concerns of women of color and trans people at the center of the project.” She is certainly no stranger to complex collaborations and has also tried to develop her concerns in the transnational work being done by the Global Security Initiative at ASU.

In addition to the core alliance with FemTechNet, the CSOV team has “been in regular communication with groups like Tactical Tech, WAM!, and the WMC Speech Project, particularly Soraya Chemaly, the fabulous people at the Berkman Center, and then also like minded folks within the DML winners community.” T.L. Cowan also received special commendation from Wernimont as someone who “really stepped up in the last six months to help guide our Kitchen Table events and, with Moya Bailey, co-facilitated the creation of the Social Media Ethics guide.”

As someone who thinks about the role of digital storytelling in disseminating hidden histories of race and gender, Wernimont has also worked with archival sources to promote public engagement in the humanities by developing the Eugenic Rubicon and Performing Archives: Curtis + “the vanishing race” as digital humanities projects designed in the Scalar platform about forced sterilization of supposed undesirables and the removal of indigenous peoples from native lands. She describes how her CSOV work has “fundamentally changed how I understand consent” and argues against casually claiming the archival resources of others. “Intellectual appropriation is pernicious because it feeds a cycle of racism,” Wernimont asserted, because “it constantly centers the labor and insight of white academics but depends on the work, experience, knowledge, and insights of people of color for its very viability.” In addition to Bailey, who has questioned the success of the existing apparatus of informed consent in institutional review boards in a much-cited article, Wernimont cites Kim Christen-Withey, Angel Nieves, T-Kay Sangwand, and Jessica Johnson as mentors. She expressed her fear that “the rhythms of 21st century academic work are not those that best serve true collaboration with non-academic communities,” because it “takes time and effort to build trust when there are literally hundreds of years of damage to be understood and acknowledged” and it “takes time to educate people in positions of power and privilege that their good intentions may be authorizing further harm.” Further, one has to be prepared to “hear that one is not welcome, one’s help is not wanted.” She pointed out that her ASU colleague Bambi Haggins wisely observed that “bureaucracy doesn’t care.”

In thinking about how informal means for digital learning might be addressed in contemporary educational institutions, she expressed her concerns that “curricula are systems of power and they can both open up and limit the possibilities for students.” Rather than “evaluate a patchwork of curricula across the country which are themselves situated,” she envisioned more imaginative types of planning in which “children have educational experiences that support their curiosities and help them craft visions of their own futures. When a class or an extra-curricular space like a computing or engineering lab or a make-space doesn’t support curiosity for women, for people of color, for queer and non-gender normative people, then I think we’ve hit a limitation. You can’t be curious in a space or a field if you feel threatened or demeaned.”

Wernimont was also skeptical about coding evangelism, because “we cannot demand that everyone learns to code until we grapple with the ways that computational literacy and numeracy, from at least the 16th century, has been entangled with racial and gender bias,” although “a person’s ability to navigate what is an increasingly complex digital life is really important.” For Wernimont, particular kinds of digital participation come at a cost. “We have to attend to those costs and how they are differentially born by particular people first — not as an afterthought.”