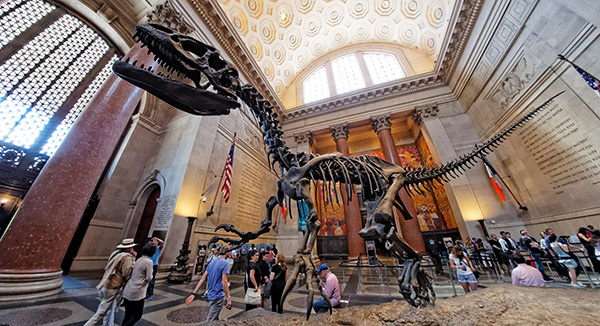 Clive Thompson is a longtime contributing writer for the New York Times Magazine and a columnist for Wired. I recently had the opportunity to bring him to my office in the American Museum of Natural History, tour the dino halls, and explore how his new book — “Smarter Than You Think: How Technology is Changing our Minds for the Better” — can help us understand how digital media can support museum-based learning (read full interview). At the end of our tour, we explored what his book has to say about Connected Learning and work funded by the MacArthur Foundation’s Digital Media and Learning Initiative. The following is an excerpt of my interview with Clive.

In your book, you talk about the power of public thinking. Please give some examples and put it in the Connected Learning framework. 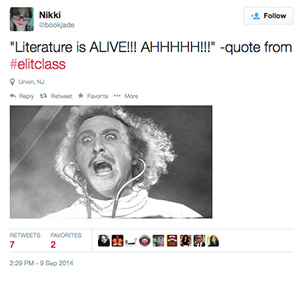 This is one of the great shifts in our behavior: when something interesting occurs, you now have the ability to broadcast that to the world, to interested friends, to interesting strangers, and to share what you are thinking or seeing.

Whenever I talked to teachers, they would talk about how, whenever they created something in school, they had the students talking to the broader world instead of just talking exclusively to each other or talking to the teacher. Whenever they were making something that was going to be shown to the world, the effect was completely electric. The students worked a lot harder. They wrote better. They would pick apart other’s work: “Ah, I can’t understand that. You have to redo that. How is someone in Germany going to understand that because you are using these American idioms?” Teachers were saying, “The more I was able to create assignments or projects that were facing the world, the harder the students worked.”

This is really great because this ties together almost all three of the Connected Learning components: the academic stuff (you’ve got the teacher who is there creating or trying to create assignments that are actually plugged into their curriculum that have specific goals), the students are working unbelievably hard because they are getting the peer effects of the fact that there are going to be people they care about and strangers whose opinion they care about looking at this stuff, and they are doing all sorts of collaborative work, helping each other out.

So, the power of public thinking to catalyze excitement and harder work out of students is really significant.

There is a teacher, Heidi Siwak, up in Ontario, who I met through Twitter. She said, “I’ve been teaching for 10 years” — she teaches grades six through eight — “and, I’m discovering that if it comes to finding a factual answer, they can find that. I used to sit at the front of the room, giving factual information, and that’s just not crucial anymore. My job is super interesting now, although I need to figure out what that job is.”

She was reading this book, “Hana’s Suitcase,” which is a book about a little girl who dies in the Holocaust. So, she read it in her class and it’s intense stuff and they are all talking about how they could engage with the public about it, maybe have a conversation, and have the kids get in dialogue with other people. So, they decide to use Twitter and have a hashtag. They were going to talk about this book and the kids would write tweets about it. The kids were thinking through what it means to engage with the rest of the world on a sensitive subject. What if people were trolls? What if people would say rude things? What if nothing happens? They were thinking through all these civic aspects. So, this is an additional dimension to public thinking; when you start dealing with the actual public, you are now teaching kids civics. You are teaching them how to be a useful and productive citizen. How can you be helpful to other people? How can you encourage other people to help you?

One of the great things about public thinking is that it costs almost nothing. You are setting up a blog, or tweets, or Flickr, or Instagram or… anything — pick your tool, as long as it usually costs nothing. The main thing you are grappling with is how much the school and the parents will allow to be public. But, the kids all love it.

The second thing I found was also really interesting. For teachers, it used to be like, you know, when you wanted to teach kids something, your curriculum was dependent on what handouts you had or what books you had in your tiny library. So, you couldn’t very easily plug into the students preexisting interests to get them to like to learn curriculum-based material. You knew you had a kid who was really interested in basketball, but you couldn’t really find a way to bring that stuff into the classroom. Well, lo and behold, the Internet comes along with this ridiculous, roiling sea of stuff. A lot of teachers have simply found that it’s a lot easier to say, “Okay, we have got the basketball kids, so we are going to basically use that interest to teach them statistics, to teach math, to teach the history of America.”

You can basically find material to plug into almost any kid’s interest and tie it to the curriculum, but it takes more work, right? Customized education is now possible because of the Internet, but customized education takes a large amount of work on the part of the teacher. The reason why you have these standardized curriculum is because, that way, they don’t have to go about reinventing the wheel with every student. Teachers are extremely overburdened because class size is rising again…. So, there is a limit to how much you can ask teachers to customize in that case.

In fact, one of the things I found that’s really interesting was how much really exciting stuff was happening in after-school programs. They didn’t have to work with curriculum. They had smaller groups. It was in these non-curriculum based situations like after-school programs, or the computer teacher who had them for an hour and could do whatever he or she wanted, I would encounter some really radically interesting things going on. These teachers were getting amazing performance out of them. Students were writing longer. They were focused on doing this work for hours and doing these remarkably capable things, with game design, or music, or blogging.

To what do you attribute that?

Part of what was so exciting to me while reading this book is that you quote the work or interview Constance Steinkuehler, Kurt Squire, Mimi Ito, Henry Jenkins, Joe Kahne, danah boyd and Mitch Resnick and… I can go on and on. These people were all doing work funded by MacArthur’s Digital Media and Learning Initiative, which birthed Connected Learning.

I found work like Constance’s and Kurt’s work so amazing because they had done it in real classrooms and have these remarkable stories. In my education chapter, I actively set as my agenda that I was going to really only talk about public schools, and ideally public schools with almost no resources. You are dealing with kids from lower socioeconomic backgrounds because my whole point is that if you’ve got a fairly wealthy school, and a low student-teacher ratio, and parents with like multiple degrees at home, the kids are going to be fine. And, they will probably figure out cool ways to use technology. But, what works when you have 30 kids and a bunch of English as a Second Language staff and parents who are working two jobs? When you don’t have any budget and you have maybe like a couple of crappy old laptops? That, to me, was what I really wanted to see. I only wanted to look at stuff that could scale. So, all those academics you are referencing were always going out there and talking to those people, people who are in challenging situations and getting good results.

I was impressed by how much of their research ended up in your book, especially given that the Digital Media and Learning Initiative only turns 10 next year. How have you seen this work mature in recent years?

I think that the maturity of the field comes from people having done a lot of experiments. And, they’ve begun to realize what works and what doesn’t work after 10 years. If you went back and looked at what people thought computers were going to be good at 15 years ago, there was a lot of goodwill. There were these ideas that computers on their own would be enough.

But no, you need to scaffold the way this stuff works.There was the idea that kids would be adept, digital natives. They would inherently get this technology. Totally not true. They might be fluent at it, but it doesn’t mean they understand how it works.  There was the idea (unfortunately, I think still being pursued by Bill Gates) that types of formal education will happen so organically that you can increase the student-teacher ratio… and, it’s not true at all. Teachers are still enormously valuable and kids know that.

I think the other thing is that people realized that they spent a lot of money on stuff that wasn’t necessary, smartboards. Some of those smartboards are like five, ten grand. Schools would buy them because they had these great demos and, then, realize this wasn’t doing anything that you couldn’t do with a $400 projector. And, they could’ve bought 10 laptops, or 20 iPads for the cost they blew on that ridiculous smartboard. I’ve had teachers tell me that they’ve gone in the basement of their school and there’s like 15 broken whiteboards stacked up. You are looking at $150,000 worth of dead technology.

So, some of the reason why I’ve seen people hitting up on the same strategies that tended to be low cost, and tended to be working with whatever kind of free tools that were just kind of lying around, and working with the tools the kids themselves were using in their everyday lives, was because they had seen schools get burned with these highly expensive, proprietary technologies. They were realizing, Wow, not only even if that did work, that’s not going to scale.

The other thing I think that happened is that we’ve been observing what kids are already learning in their everyday lives and taking cues from that. It took 10 years to observe what kids were doing. It’s not immediately obvious until you see the stuff happen. In one sense, I felt lucky because I played so many video games and I was so involved in video game culture that I had a direct personal experience of watching all this knowledge formation happen, and watching all this collaboration happen. I think that is the other thing that led me to all these scholars because some of them came up the same way… passionate about stuff, and they ran into kids and they realized all these kids were punching way above their weight in their side passions. They started thinking how we bring it to them in the classroom, which is the same question I was asking. So, we were all led to the same answer.