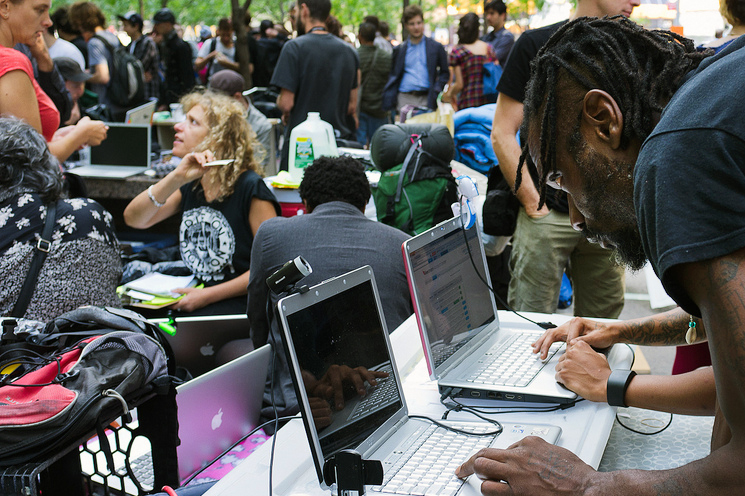 If you caught Joe Kahne’s recent post, you’ll know something about a concept that’s also central to my latest mini-book. As a member of the MacArthur Foundation-backed research network Joe chairs, I’m also exploring the notion of “participatory politics” as a useful way to understand young people’s engagement with digital-age civics.

I got interested in this topic both as a media maker who collaborates with teens at Youth Radio, a Peabody Award-winning youth-driven production in Oakland that serves as NPR’s youth desk, and as a researcher who’s spent the last few years exploring the digital afterlife of youth-produced media. By digital afterlife, I mean the complex and sometimes fraught set of activities that take place online and in real life after young people have released media projects — stories, apps, poems, etc. — into the public sphere. One way I’m thinking about digital afterlife is by considering the civic and political implications of young people’s media once it’s in circulation, for themselves and for the issues they care about. In some cases, young people use their projects to transform debates, decisions, and public policies. In other cases, their projects take unexpected turns and can sometimes even backfire. One thing I want to understand is what makes the difference between case one and case two.

Which brings me to my new report. In it, I write about the ways in which young people engage with peers and power brokers to express voice and exert influence using “any media necessary,” as Henry Jenkins and his colleagues at USC like to say, in the process redefining some key dynamics that govern civic life. Five tactics surface out of the research that are part of effective, equitable participatory politics among young people: Pivot Your Public (mobilizing civic capacity within popular culture engagements); Create Content Worlds (using inventive and interactive storytelling that sparks sharing); Forage for Information in public data archives; Code Up (using computational thinking to design tools, platforms, and spaces for public good); and Hide and Seek (protecting privacy and information sources).

After describing these tactics as they manifest themselves in a range of youth-driven activities, I discuss concrete ideas for cultivating the new literacies that will enable young people to participate in public life. Of course, while digital tools and new modes of social connection remove some of the barriers to civic participation, they also eliminate some of the safeguards that have traditionally been in place to mitigate harm. I close out the book by considering some of the risks associated with these participatory tactics and ways to avoid them. You can download the report in its entirety for free, or here’s an excerpt.

Though sometimes disavowing “politics” as an apt description of what they’re doing, civically engaged young people are using every means and medium at their disposal to carry out the core tasks of citizenship. Through a mix of face-to-face and digital encounters and interventions, they deliberate on key issues, debate with peers and powerbrokers, and in some cases change the structures of joint decision making and the course of history (Allen and Light, forthcoming)… Many young people who are coming into their political selves today both distrust public institutions and want in. They get excited about alternative ways to make a difference, and they seek access to traditional channels to power. They may appear to act alone but are always operating in interconnected networks that allow for and inhibit specific modes of civic engagement. Through their interactions with peers and elites, they are redefining some key dynamics that govern civic life.

This report delves into these shifting dynamics to ask the following: What specific tactics are young people experimenting with to exercise agency and intervene in public affairs? How can these activities grow in quality? What work is required to ensure that opportunities to engage in participatory politics are equitably distributed among youth, including youth who are marginalized from digital access and other forms of privilege? I will draw from insights in the existing literature as well as in a set of interconnected though independent studies that are still ongoing, as part of the Youth and Participatory Politics (YPP) Research Network…

My participation in this network bridges the role of scholar and practitioner. Since 1991 I have researched youth learning and civic engagement in community organizations and peer-based activities in which young people create media projects aimed to engage, inform, and move the public. Starting in 2000, I added a second set of responsibilities to that effort when I began actively collaborating with youth and adult colleagues as a hands-on media producer and educator. Together we have co-created radio stories, videos, photo essays, online posts, spoken word poetry projects, and mobile apps, sometimes reaching audiences in the tens of millions, all the while documenting our joint process using ethnographic and participatory research techniques (see, e.g., Soep 2005, 2012; Soep and Chávez 2010).

The frameworks emerging from the YPP Research Network are designed to be more than abstract concepts; they must advance the work at hand. Alongside other action-oriented colleagues, I am always asking: How effectively do these frameworks capture the range of activities young people carry out on a day-to-day basis as they develop civic practices, products, and theories of change? How useful are these frameworks for educators, producers, advocates, and organizers working in diverse online and offline settings to support young people’s agency in public spheres?

The list of tactics identified here is meant to spark discussion and debate about what is covered, what is missing, and what further work is required to understand and support the highest quality and most equitably distributed forms of participatory politics. The tactics are derived from a systematic research agenda and from sustained, direct collaboration with youth. My aim is for these tactics to resonate with and advance the efforts of young people and their allies who are carrying out digital-age civics on shifting ground, where the crucial matter of young people’s role in democracy is in question and at stake.