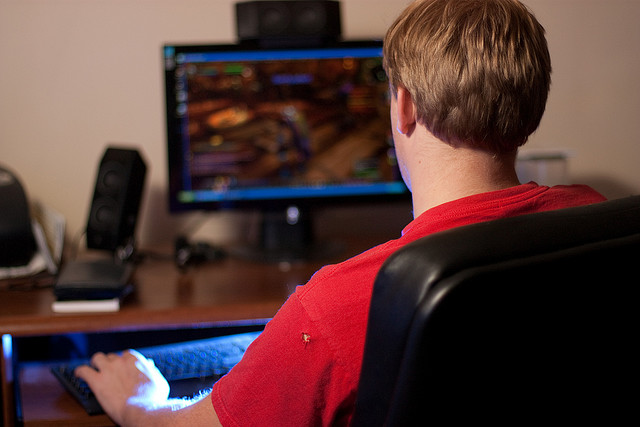 Mark Chen is a post-doctoral scholar at the University of Washington in the LIFE Center and Institute for Science and Mathematics Education (UWISME). He is working with the Center for Game Science (CGS), helping to evaluate player learning of science and math in games such as Foldit and Refraction. His research focuses on teamwork, communication, and group expertise in situated gaming cultures and builds on his PhD from the University of Washington that looked at the practice of a group of gamers in the online game World of Warcraft. Chen wa

s one of a dozen graduate students and post-doctoral scholars who participated in the Digital Media and Learning Research Hub’s Research Associates Summer Institute 2011. In the video below, Chen talks about how his love for gaming blossomed into a meaningful academic career studying the ethnographies of gamers and gaming culture. Below are just a few highlights from the video, but throughout the entire video, Chen provides detailed anecdotal evidence that will stir your thinking about how games fit within an overall theory of learning and literacy.

In 2003, Jim Gee’s book came out, and while I was reading it, I was also playing “Star Wars: Knights of the Old Republic.” In it is the prisoner’s dilemma…something I learned in psychology classes in undergrad. So I saw that in the game and said, wow, these guys are introducing these academic concepts in games.

I became really fascinated with modeling other game theory things in games and exploring morality and exploring role-playing. These decisions I was making weren’t what game theorists would call rational. Economics and everything is all based on game theory and is under the assumption that people are always acting rational and people are making self-interested choices, but I didn’t make that choice.

In the Stars Wars game I was playing, I played it multiple times. I wanted to see different endings and different ways the story could take shape. I think games do that really, really well.

I do eventually want to go back to more humanistic, more artistic explorations through game play of really difficult decisions and really morally ambiguous decisions. I think they can be sort of a vehicle to cause players to reflect about who they are, what kinds of choices they make in their everyday life, and be a mirror — but more than that  — a sandbox, where they can try different things.