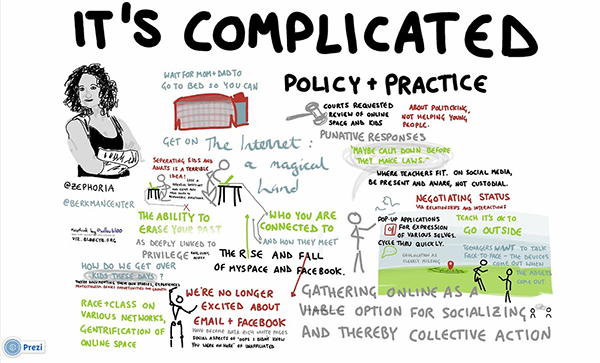 One of the best perks of supporting the Los Angeles Central Library is advanced notice of the readings and talks coming through town as part of their ALOUD program. A few months ago, when I noticed that danah boyd was going to be talking about her recent book, “It’s Complicated: The Social Lives of Networked Teens,” with USC Professor and Connected Learning pioneer, Henry Jenkins, I snapped up a ticket. The talk took place at the end of July, and the ideas that these two scholars expressed about how young people are interacting with digital tools are still rattling around in my mind, inviting further exploration.

While boyd and Jenkins geared their talk largely toward parents, allaying their fears about the hours their children spent on social media sites they did not fully understand, I kept yearning for the conversation to turn its focus toward teachers and the ways that students’ digital lives could be translated into powerful learning opportunities. Formal educational sites were mentioned in passing when boyd referenced the “hierarchies of school” that dampened innovative digital learning in classrooms and relegated it largely to after-school spaces. While many scholars are wary about the role that classrooms can play as sites for powerful digital learning, citing the difficulties that come with bothersome constraints like standards and testing, I would like to re-introduce them to the dialogue and show how three of boyd and Jenkins’ main points could serve as catalysts for continued conversation among educators about helping students build personal, academic, and civic connections through digital tools.

1. “Tools that can connect us don’t do so automatically — online spaces are often just as segregated as other social spaces.”

boyd and Jenkins explained that while it may appear that digital tools automatically inspire connection across boundaries, the reality of how people use them often produces increased isolation socioeconomically and ideologically. They referenced racial divides between the groups of young people who access MySpace vs. Facebook, or Vine vs. Instagram, as examples of how the marketing of personalization and choice can be a guise for reproducing social divisions. Without concerted preventative effort, individuals can use the Internet to access content that corresponds to and validates their worldviews and biases while shutting out alternative perspectives, which is problematic for a democratic society.

I see this as an urgent rationale for critical media literacy in schools. While schools have unfortunately become more segregated over the years, they still remain one of the public institutions that can most readily introduce young people to a diverse range of people, texts, and ideas. Classrooms are perfectly positioned to teach young people how to understand, interpret, and analyze news content, political rhetoric, and marketing jargon so that they can make informed choices about how they interact with the complex digital information environment. The key word here is critical — educators need to think long and hard about the most powerful way to use digital tools to facilitate very human connections, rather than assuming that shiny devices will somehow magically foster bridges across difference.

2. “Young people use the Internet to organize political action, but their actions often get trivialized and patronized.”

During their talk, boyd and Jenkins made the incredibly important point that young people do not simply use social media for trivial or childish pursuits; instead, they use digital tools as platforms for responding to and acting upon the world around them as they develop into civic actors. And yet, while youth are criticized for being self-involved and petty in online spaces on one hand, they are often marginalized on the other when they do attempt to delve into political issues or organize social action. Adults often either dismiss their efforts as “cute” when they involve raising awareness about issues, or dangerous and punishable when they involve staging walk-outs or protests about those same issues. We may espouse freedom and independence as values we want to instill in our youth, but we don’t do a very good job of allowing them to exercise those values.

Again, schools are uniquely situated to provide young people with resources and guidance to express themselves in digital spaces and honor the new forms of literacy that online spaces have generated. This is not to say that schools are needed to legitimize youth online participation — only that they have a role to play in helping young people understand the role that text and media play in politics and social movements so that students can attach some context to what they do online. Plus, schools can help young people learn academic literacy skills through a medium in which they are passionately interested so that they can provide counter-narratives to those who would patronize them.

3. “The idea of ‘digital natives’ (or ‘digital immigrants’) undermines our own responsibility for teaching youth about digital life.”

Finally, boyd and Jenkins warned against the use of terms like ‘digital native’ or ‘digital immigrant’ — the former because it assumes that young people do not require guidance when participating in the digital world, and the latter because it suggests that those less familiar with digital tools will automatically have a difficult time negotiating the internet. This point again reminds us that digital tools are simply that — tools — and they must be used carefully and conscientiously by human beings if we want to reap their potential benefits of connection.

I believe that one of the roadblocks to innovative use of digital media to support teaching and learning in the classroom is the perceived divide between young people and adults in digital ability. Teachers can be reluctant to experiment with new media because of their unfamiliarity with it and their fear of giving up control in the classroom, and when they do introduce technology, they are at risk of imbuing it with magical powers and failing to give students direction about what to do with it, assuming that students already know. While we do need to tap into the knowledge and expertise that students bring to navigating the digital world, this does not mean that we abdicate responsibility for setting up educational opportunities that will allow young people to interact with the digital world in sophisticated and critical ways.

boyd and Jenkins raised provocative points about the digital lives of young people that I hope will jumpstart a conversation among educators and spur some brainstorming. What do you think is the ideal relationship between classroom teaching and learning and digital media? Share your thoughts in the comment section below.