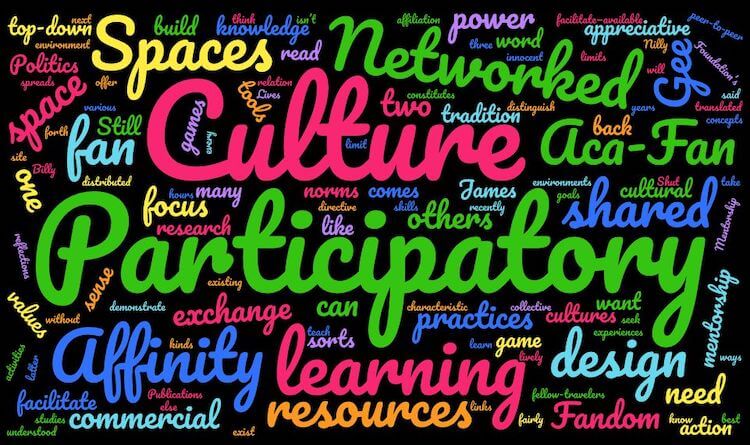 A special issue of the bilingual (Spanish-English) journal, Working Papers on Culture, Education, and Human Development, dropped recently, sharing three essays on the theme of “Do We Still Believe Networked Youth Can Change the World?” The exchange started with the plenary session I did with activist/entrepreneur Esra’a Al Shafei at the Digital Media and Learning Conference a year or so back. An edited transcript of that memorable exchange about social change movements in the Arab world and some reflections on it open this issue. My long-time friend James Paul Gee, a major figure in the education world and someone who writes often about games and learning, responded with some fairly strong critiques of the concept of “participatory politics” as it has been shaped by the MacArthur Foundation’s Youth and Participatory Politics research network and others in recent years. And I, in turn, responded clarifying and defending our core concepts and also trying to speak to the similarities and differences between Gee’s concept of “affinity spaces” and my own work on “participatory culture.” The two are sometimes used interchangeably but I see significant differences (although some overlap) between the two. If you want to read this lively back and forth, you can find it here.

Here is a brief sample from the exchange.

Why talk about affinity spaces and distributed teaching and learning systems? Why isn’t talking about participation and connection enough? Think of an empty affinity space (no one is any of the spaces at the moment). Each of these is sitting there (really or virtually) with tools and resources to create certain sorts of learning, teaching, and appreciative systems. Each is like a restaurant resourced to cook certain sorts of food in a certain way, though food for the mind and action in the case of affinity spaces.

Such spaces are most often the historical product of mutual top-down and bottom-up design and organization. As people move through them they are guided/directed/taught by the tools and resources— and the practices they facilitate—available to them and, in the act, over time they transform them. But at no point are people innocent of directive frameworks and teaching as design whether done by a tool, resource, or person. It is the shared appreciative systems, skills, and identities that give fellow-travelers (some more than others) power in the sense of directed agency of a characteristic, focused, social, and socialized sort.

In the end, I argue that we need to focus on capacities, design, resources, values, beliefs, and norms and not media or even participation per se. The latter are constrained by and facilitate the former.

I am often asked about the similarities and differences between Gee’s notion of “affinity spaces” and my own conception of “participatory culture.” I have always seen potentially productive overlaps between the two. But, Gee’s suggestion here that we think about an “empty affinity space” suggests some important differences. Gee has sought to distinguish “affinity spaces” from the affiliation or sociality conjured up by a word like “community.” Starting from a focus on games, game designers, and game players, Gee is interested in shared resources and activities, rule sets and affordances, which are to some degree built into the designed environment. Starting from my personal focus on fandom, my participatory culture model emphasizes the social ties, cultural traditions, shared norms and values, and expressive practices that support informal learning. Fans cluster around existing cultural works produced by others, often commercial producers, but they read them in relation to their own lived experiences and draw from them resources that help them to better articulate their own perspectives. While commercial producers want consumers, they have not always welcomed fans and for that reason, their attempts to build platforms to facilitate fan interactions — to set the terms of fan participation — have largely failed. Fandoms emerge from other fandoms as diasporic knowledge spreads from one site of community engagement to the next. Mentorship is practical but not hierarchical: those who know teach those who need to learn without regard to age or authority.

Fandom is not a space; fans interact with each other across a wide range of different platforms and environments, drawn to them because they offer certain affordances that allow them to pursue their shared goals and interests.  Fandom’s power comes from its potential to persist despite top-down limits that shape the design and operation of various platforms. Shut it down here and it will spring up somewhere else. The ways commercial producers and platforms enable, limit, or seek to profit from fan engagements has become increasingly central to fandom studies research, but most of us recognize that the fan community (a word too valuable to reject) is not limited to a single platform and its affordances.  There is no such thing as an “empty” fandom; fandoms only exist when groups of people are brought together through their shared social interactions. The spread of fan knowledge and practices is better understood in terms of mentorship (including peer-to-peer mentorship), tradition, and emergence (grassroots experimentation and innovation) rather than design.

Affinity spaces and participatory cultures are not mutually exclusive; one can imagine many potential overlaps between them, but we can not assume that every affinity space constitutes a participatory culture or vice-versa.  I share Gee’s sense that we should be paying more attention to how we build stronger bridges between different participatory cultures, how we find the common ground we need to rebuild the kinds of democratic culture many of us desire. But I would have said that participatory politics movements, such as March for Our Lives, demonstrate the power of such coalitions to take collective action.

There’s a lot more where this comes from — translated into Spanish as well as English.