It is now possible to measure and manage emotions through mobile apps and other digital devices. As part of my current research exploring the expert practices and knowledge base of the emerging field of “educational data science,” I have been gathering examples of educational technologies that are designed to both monitor learners’ emotions through data mining techniques, and also to manipulate their feelings. I term these “psychopedagogies” of emotional maximization that are based on insights from the psychological sciences and delivered through digital media. They are also part of a wider trend in the digital control of population mood by governments. 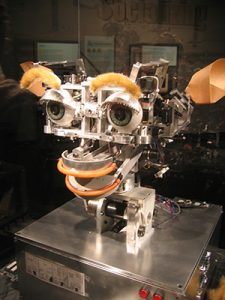 Kismet, a robot head, was made in the late 1990s at MIT by Cynthia Breazeal as an experiment in affective computing; a machine that can recognize and simulate emotions.

Before going into examples of emotion-maximizing media, it is important to note how the data-mining and analysis of children’s emotions has become a core concern for educational data science. For example, a report by Roy Pea highlights the possibilities of using data scientific methods to engage with “ ‘non-cognitive factors’ in learning such as academic persistence/perseverance (aka “grit”), self-regulation, and engagement or motivation.” It suggests that measuring the “emotional state” of learners could be accomplished by collecting “proximal indicators that relate to learning” through such techniques as “facial expressions detected by a computer webcam while learning,” or by analysing data sources like “video, eye tracking, and skin temperature and conductivity.”

In another paper on educational data science, Philip Piety and coauthors also refer to using data science methods to measure “learners’ non-cognitive characteristics such as differences in levels of academic motivation, attitudes toward content, attention and engagement styles, expectancy and incentive styles … persistence through adversity … [and] tenacity or grit.” The shared language in the two texts of emotion indicators, engagement, emotional state, and so on, is highly indicative of a strongly psychological influence on the educational data science field.

And both texts particularly point toward the possibility of using new kinds of digital media to data-mine children’s emotions during educational experiences in order to offer psychologically-defined programs for emotional maximization. Happiness-enhancing apps and emotion learning analytics are two emerging areas of development in this field.

One example of a happiness app for schools is ClassDojo, the current “killer app” for education. ClassDojo launched in 2011, has received more than $10 million in Silicon Valley venture capital, and by 2015 had more than 3 million subscribing teachers, serving 30 million students across 180 countries. One of the slogans for ClassDojo is “happier students, happier classrooms!” The huge user numbers, and financial investment, suggest that the happiness message has contemporary currency.

ClassDojo is a free mobile app that allows teachers to award “positive” points for individual children’s behaviour and participation in the classroom. Points can be awarded under criteria of “hard work,” “participating,” “helping others,” “teamwork,” “leadership,” and “perseverance and grit,” and behavioural targets can be set for both individuals and groups to achieve positive goals. Teachers can produce data visualizations for each child to show their progress over time, and can also instantly message parents with photos, text messages and “stickers.” The children’s data can then be publicly visualized on a class whiteboard so the entire class can see each other’s timelines.

ClassDojo is underpinned by particular psychological concepts. Its website approvingly cites “character” research such as the book by journalist Paul Tough, “How Children Succeed: Grit, curiosity and the hidden power of character.” The different character traits identified in that book underpin the positive behavioural goals promoted by ClassDojo.

ClassDojo is also influenced by the U.S. network of KIPP charter schools (Knowledge is Power Program). KIPP’s approach focuses on “the development of character” and is explicitly grounded in the positive psychology of Martin Seligman, author of texts on “authentic happiness.” Building on positive psychology concepts, KIPP’s “character work focuses on seven highly predictive character strengths that are correlated to leading engaged, happy and successful lives: zest, grit, optimism, self-control, gratitude, social intelligence, and curiosity.” Happiness apps are not just intended to make children feel good, they are fundamentally about training kids to be good characters, as defined through the language of positive psychology.

The psychopedagogy of ClassDojo approaches the child through the gaze of positive psychology. It enables the gaze of the feel-good psychologist to see into the classroom through a mobile digital app that itself promotes a form of positive surveillance which makes every child’s character and emotions the constant object of scrutiny. The psychological observation of the emotions is a window on to the underlying character of the child.

Perhaps the most significant digital instantiation of psychopedagogy is ‘emotional learning analytics.’ Emotion analytics technologies make extensive use of psychometrics, sentiment analysis, natural language processing, and other measurable behavioral indicators of the emotions, in order to capture real-time data about children’s affective and non-cognitive aspects of learning. The aim of emotional learning analytics is:

to integrate automatic emotion analysis … into learning analytics measures in order to achieve a holistic view of the learners’ progress and uncover any potential risks due to negative emotions … [and] the use of the automatic detection, assessment and analysis of emotions to provide further assistance, personalised feedback and guidance in online courses.

Automated forms of emotional learning analytics can provide teachers with the necessary emotional information required to decide on appropriate pedagogic intervention, enable school administrators to track pupils’ affective experiences, and help children themselves to understand their emotions through data visualizations.

In addition, a range of biosensor and biometric technologies for measuring children’s moods have been developed for schools. These include ‘student sensor bracelets’ designed to detect excitement, stress, fear, engagement, boredom and relaxation through students’ skin. Technically, student sensor bracelets or ‘engagement pedometers,’ send a small current across the skin and measure changes in electrical charges as the sympathetic nervous system responds to stimuli. These electrodermal skin response bracelets measure skin conductance as a physiological indicator of an emotionally aroused response.

Another proposed emotion-detection device consists of a computer-mounted webcam connected to facial recognition software and computer vision algorithms that have been designed to measure and monitor children’s levels of emotional engagement through eye-tracking and facial expression. It’s designed to provide teachers with feedback on learner engagement that can then be used to tailor subsequent activities in order to heighten positive emotional responses, such as motivation, attention, and engagement, and minimize negative emotions, such as confusion, distraction or anxiety.

Significantly, emotional learning analytics and related feeling machines depend on expert techniques that can classify and measure human emotion. A recent review of emotional learning analytics research found reference to over 100 different measurable emotions, all linked to different techniques and methods of identification, classification and measurement. The identification and measurement of behavioral indicators through content analysis, natural language processing, emotion questionnaires, as well as big data techniques of sentiment analysis and ‘machine emotional intelligence’ systems are all listed in the report as expert techniques for mining children’s emotions, which concludes that ‘with increased affordances to continuously measure facial and voice expressions with tablets and smartphones, it might become feasible to monitor learners’ emotions on a real-time basis.’

A vast science of the emotions underpins the mood tracking apps and emotion analytics devices now being targeted towards the mining of children’s feelings. Psychological theories of the emotions and physiological models of the body have to be encoded into the devices, so that a technology like a student sensor bracelet ultimately becomes a mobile little psychologist accompanying and observing the child at all times.

Emotional learning analytics and positive behaviour apps, as a particular psychopedagogic branch of R&D in educational data science, are a contemporary instantiation of a broader set of historical, social and technical developments relating to the measurement of the emotions. This goes back at least as far as attempts in the 1920s to measure children according to categories of ‘development’ defined by early developmental psychologists.

In the contemporary big data setting, techniques of emotion measurement and management have been developed further in commercial and governmental objectives. William Davies, in the book The Happiness Industry: How the government and big business sold us well-being, has detailed how the authority of the psychological sciences has proliferated through big data technologies, face-reading software, sentiment analysis and ‘more emotionally intelligent computers’ that can be taught how to interpret human emotional behaviours. These technologies enable unprecedented psychological tracking and gauging of the emotions, but can also be programmed to judge and influence feelings. As a consequence, he argues, ‘the truth of our emotions will, allegedly, become plain, once researchers have decoded our brains, faces and unintentional sentiments,’ and

society becomes designed and governed as a vast laboratory, which we inhabit almost constantly in our day-to-day lives. … The accumulation of psychological data occurs unobtrusively in such a society, often thanks to the enthusiastic cooperation of individual consumers and social media users. Its rationale is typically to make life easier, healthier and happy for all. It offers environments, such as smart cities, which are constantly adapting around behaviour and real-time social trends.

In other words, we are all living our lives as specimens in a vast psychological laboratory, the subjects of constant emotional observation, experimentation, and psychological manipulation.

Such techniques have now been installed in the dominant operating model of many governments and social media businesses. As Zeynep Tufekci argues, corporations and governments are using ‘new tools and stealth methods to quietly model our personality, our vulnerabilities, identify our networks, and effectively nudge and shape our ideas, desires and dreams.’ The sciences of happiness and well-being indicators, twinned with the mobilization of techniques of sentiment analysis and so on, represent the mass psychological and behavioural surveillance of population mood being carried out by scientific experts on behalf of governments and businesses.

Psychopedagogies of emotional management extend beyond the school walls into the maintenance of the social order as a whole, as individuals generate an affective audit trail that can be mined for purposes of governmental and corporate prediction and pre-emption. As Carl Cederstrom and Andre Spicer put it in their book The Wellness Syndrome, people are now being commanded to turn their lives ‘into an exercise in wellness optimization’ as part of a new ‘biomorality’ that demands people act to become more happy and healthy. The responsibility is on the individual to become emotionally self-aware, self-improving and self-caring, happy in the face of governmental austerity, welfare cuts, and the reproduction of persistent social disadvantages—social problems experienced and felt nowhere more acutely than in schools. And yet it is through schools, implanted with happiness apps and emotion-mining media, that children are being inducted as subjects into this vast experiment in public mood optimization.

Through wearable emotion sensors, emotion analytics and happiness apps, it is becoming possible for experts in educational data science to conduct constant surveillance of children’s feelings while undertaking learning activities. These technologies make the child visible and amenable to observation and inspection by the teacher, school administrator, and the parent, who have all adopted the surveillant gaze of the psychologist and the capacity to codify, calculate, predict and maximize the emotional functioning of the child.

Media that can data-mine, monitor and manipulate the emotions situate children within a social and political context in which the constant psychological surveillance of behaviors, sentiments and emotions is being undertaken for the purposes of auditing the population as a whole. In this sense, the psychopedagogies of emotion-mining devices and happiness apps are part of wider ‘psychoveillance’ complex that is always watching to make sure people are measurably happy and well, and ready to intervene with its feeling machines when their happiness indicators show they’re not. Children are in the lab at the forefront of this scientific frontier in mood measurement, specimens in a massive experimental machinery for the management of the emotions.