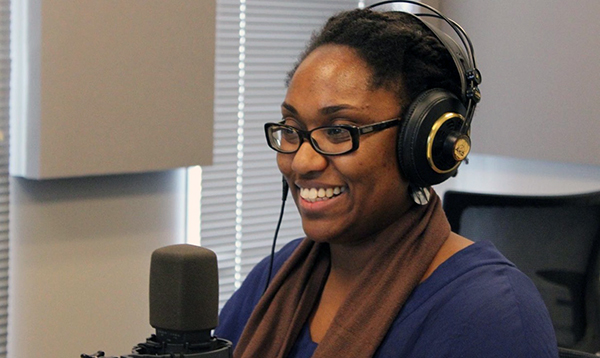 This is the first part in a multi-part series about participants in the Race, Memory, and the Digital Humanities conference. This series features public intellectuals in the academy discussing digital literacy issues.

I first met Marcia Chatelain at the Race, Memory, and the Digital Humanities Conference, where she gave an inspiring talk about how her work on The Ferguson Syllabus was connected to her own past at a variety of academic institutions, including the University of Missouri, Georgetown University, and William and Mary. In introducing a syllabus that provided background materials for understanding police violence against unarmed civilians like Michael Brown and the protests that erupted following his death, she described the many ways in which “African American labor has been cut off from the opportunities of higher education” historically.

As a follow-up to some of the issues raised at the conference, Professor Chatelain agreed to answer a series of questions from DML Central about how digital literacy, digital activism, and knowledge of Black history might be connected. Although widely seen as the author of the Ferguson Syllabus, which first circulated as a hashtag, Chatelain explained that she didn’t want to take credit for the work of others, who not only contributed to the anthology of resources but developed techniques for bringing the material to a wide range of audiences, including K-12 schools, public libraries, and community centers.

“#FergusonSyllabus, in my mind, belongs to all the faculty and teachers who made a commitment to allowing Ferguson to shape classroom learning and dialogues.  I have been thrilled to see the ways that people have taken the initiative to create a home for it on their websites, by circulating Google documents that comprise resources for the classroom, and the various #syllabus movements that circulated online after Ferguson Syllabus.  Every month, I hear from someone who used the materials in their classroom, or share with me a project students organized around it.  I have been able to gain a window into the world of K-12 teachers through #FergusonSyllabus, because when I made the call for educators to focus on some part of the crisis in Ferguson, MO, K-12 teachers revealed a deep desire to talk about race and power in the U.S., but they were limited by the climate, time constraints, and even prohibited from talking about it. With all of those challenges in mind, I was impressed by the creative ways teachers found an entry point into talking about Ferguson, in a sense, under the radar.”

Although in popular media depictions, classroom instructors are often shown as less digitally savvy than their students or hostile to digital activities that might distract from more traditional learning, Chatelain was able to capitalize on the large numbers of educators now turning to Twitter to crowdsource materials for the classroom.  “I think the fact that this work circulated on Twitter, so it created a teaching public which could share successes and failures with each other helped people feel less alone in these efforts.  I think it also helped educators understand the power of social media.  I think there are a number of educators who still believe that social media are only distractions, rather than tools for us to continue the learning process outside of the classroom.”

Chatelain’s own experiences incorporating digital media into her teaching reflected a process of development as she worked through how social network sites might be areas for student outreach, public activism, or scholarly exchange. “A few years into teaching undergraduates, I realized that the best way to connect with them is to have an understanding of how social media framed the way they looked at information and communicated with each other.  I started with a Facebook page in which students could continue conversations from class in a digital space.  If we had a conversation about ideas of the American Dream, I would post articles or blog posts that focused on one of the themes we covered.  I found that students were more open to checking a Facebook page rather than an e-mail to access an article from the New York Times.”

From Facebook, Twitter was the next logical step in incorporating digital media that students might generally use outside of the classroom into their campus research experiences. Chatelain found short-format microblogging useful as a way to keep students current on course material. “I added a Twitter account to again communicate with students in more creative ways, including tweeting out opportunities for scholarship, internships, and events that would be of interest to them.”

Information design strategies that incorporate visual media are an important part of Chatelain’s pedagogical style. “I have an undergraduate degree in Magazine writing and editing, and I learned a lot in college about telling stories visually, so my classroom Keynote slides often look like magazine layouts.  I am very careful about choosing dynamic images, attractive and readable fonts, and I embed video and music in most of my presentations.”

Although Chatelain’s digital pedagogy began with Facebook, she doesn’t see it as essential to her teaching planning for 2018. “Today, my students are less inclined to use Facebook; their parents enjoy it! I use Snap Chat and Instagram, as well as Twitter, to check in with students, connect them to opportunities, and have a little fun.  I let my students into the world of being a scholar by taking pictures of places where I lecture or consult, and they enjoy the travel photos I share.  I think that these tools are critical in bridging some of the divides between teacher and student.”

Now that high-quality microphones, voice recorders, and other audio equipment has become increasingly affordable, Chatelain encourages educators to explore podcasting as a way to spread their ideas. “I love podcasting! The first thing educators should understand is that making a podcast is difficult, so if you want to create one with students, start small and then scale up. But, with that being said, it’s an incredible tool for teaching imaginative writing, public speaking, research, sound production, and digital engagement. I think it’s a great way to create a meaningful group project that goes beyond a collaborative presentation or paper to challenge students to learn how to speak to those outside of their classrooms. Podcasts also provide a wonder teaching tool about storytelling, can help model the kind of conversation we want to have in the classroom, enhances listening skills, and they are an excellent way to help learners who struggle with reading.”

Like the developers interviewed for the DML Central six-part series about the Center for Solutions to Online Violence, Chatelain had some caveats about combining personal and academic digital identities, but she encouraged educators to not be discouraged by the prevalence of toxic interactions online. “I think that if you decide to organize any effort that centers a rigorous, academic response to a crisis — whether it be a case of police brutality, the rise of white nationalism, or a heightened awareness of sexual misconduct — you have to be prepared for trolling.  The trolling can be relatively benign or incredibly vindictive. I think academics have to know who is in their community or camp to help them emotionally, and there has to be a clarity on how your institution supports (or doesn’t support) faculty when they are attacked. I think that these projects are most powerful when people are willing to sign their names to them and really be present for the process.”

Chatelain’s own understanding of the context of Ferguson was informed by her personal experiences as a student in Missouri and as an academic working in Washington D.C. and writing about Chicago. In this way, the local context informed her work creating educational digital media for national and even international audiences. Although today’s networked publics may be distributed around the world, she argued that digital media does not erase the importance of specific spaces and places despite its global reach and claims to universal access. “I think that the local is where we find our grounding and our orientation toward larger, structural problems. The death of Michael Brown and the response to it was upsetting in and of itself. But, in knowing the landscape in which this happened allowed me to think about the translation process necessary for people who don’t understand Missouri or the Midwest or the ways exurbs operate outside of metropolitan areas. So, I think highlighting the scholarship and efforts of people in proximity to Ferguson was important to me in reiterating that understanding the roots of this problem is not an impossible task; we simply have to look at the local archives, resources, and voices to make the connections to the state failure and oppression in Ferguson to a larger, global struggle of people relegated to the margins of a society. I think that the digital space is one of the most efficient ways to organize the creative energies of the local in service of the larger world.”

Chatelain hopes that including more media literacy will also enhance many forms of traditional literacy and enrich public discourse at a time that too many people are only exposed to soundbites and pro vs. con punditry on the airwaves. “I think the K-12 landscape has to break out of the idea that teaches young people the point-counterpoint approach to debating an issue. I think that students need to understand that it is not simple. Rather, we need to spend more time teaching students how to connect research and intellectual inquiry to our most vexing and confusing social problems. Instead of suggesting that debate leads to certainty, we have to teach students that sometimes we do not conclude these conversations with certainty.”

Although it can be challenging to manage political discussions in a classroom, Chatelain encouraged teachers to facilitate deeper discussions about current events. “We are in a continual process to search for clarity. I think that if students are given that perspective, they will be able to wade through the noise in our media climate today. I also think that we have to ask students what they think and why more often. I’ve been concerned about the number of teachers I meet who assume that students are shallow or ill-informed when they become more interested in social justice issues or are trying to figure out their feelings about activism. I think that we also have to make sure that in critiquing media or decrying the impact of social media, we are not turning young people away from learning about current events or learning how to engage with others online.”

“I think we are in a great moment as educators because of the incredible access we have to digital tools and resources. But, at the end of the day, good teaching requires us to help our students translate all of those resources into something meaningful and real in their lives.”