As a professor at a public, land-grant institution, I consider it my sacred responsibility to produce and share knowledge that directly benefits the communities I have the honor to serve. As a professor of education, I am particularly committed to supporting young people, teachers, and all who champion learning. Because of these commitments, few things frustrate me more than the academic publishing system that places many of the articles I write about literacy and civic engagement behind firewalls, available only to those with access to institutional databases. The people with whom I hope to communicate through my research — indeed, often the very people who participate in it — are unable to utilize it.

Now, I will be the first to admit that the writing published in scholarly journals often suffers from overuse of jargon and density of language that can render it of little use to educators — that’s a topic for another post. But, for those of us whose careers depend upon publishing in these journals AND are striving to write in clear and relevant ways for multiple audiences, it is frustrating to feel that we are giving a monologue that may be heard only by a few other scholars.

This is why I’m so grateful for the experience of having an article that I co-wrote with friend and colleague, Antero Garcia, publicly available on the web annotation platform, Hypothesis, through a partnership between the National Writing Project (NWP) and Marginal Syllabus. Through a project called Writing Our Civic Futures, NWP is supporting monthly conversations about what’s next in youth civic learning and engagement guided by focus texts. Our article, which was published earlier this year in Review of Research in Education, was the November focus text.

The process was simple — folks could sign up for free Hypothesis accounts and then interact with our article on the platform (the rights to which were obtained from the original journal). Readers could highlight parts of the text they wanted to comment on, respond to others’ comments, or share links to related content. This entire experience was moderated gracefully by colleagues Joe Dillon and Remi Kalir, who have each written insightful pieces about the nature and purpose of the web annotation project — you can access them here and here.

While detailing every fascinating interaction about our article that occurred on the platform is beyond the scope of this piece, I want to highlight two examples that encapsulated for me the dialogic value of this experience.

First, I was struck by the ease with which annotation fostered productive conversations between individuals who soon became collaborators. At one point in the article, Antero and I described a Twitter campaign aimed at exposing media bias in order to make an argument about innovative forms of youth civic innovation. Our writing was the catalyst for a dialogue about the (im)possibility of neutrality in media representations. What I found fascinating was the way that those who engaged with our piece grabbed hold of particular ideas and ran with them in ways we did not predict – it reminded me of the incompleteness of any single text and how texts could only reach their full potential as a sources of knowledge production when engagement continues beyond the page. Annotation made ideas that could have simply died in print live on and flourish collectively. 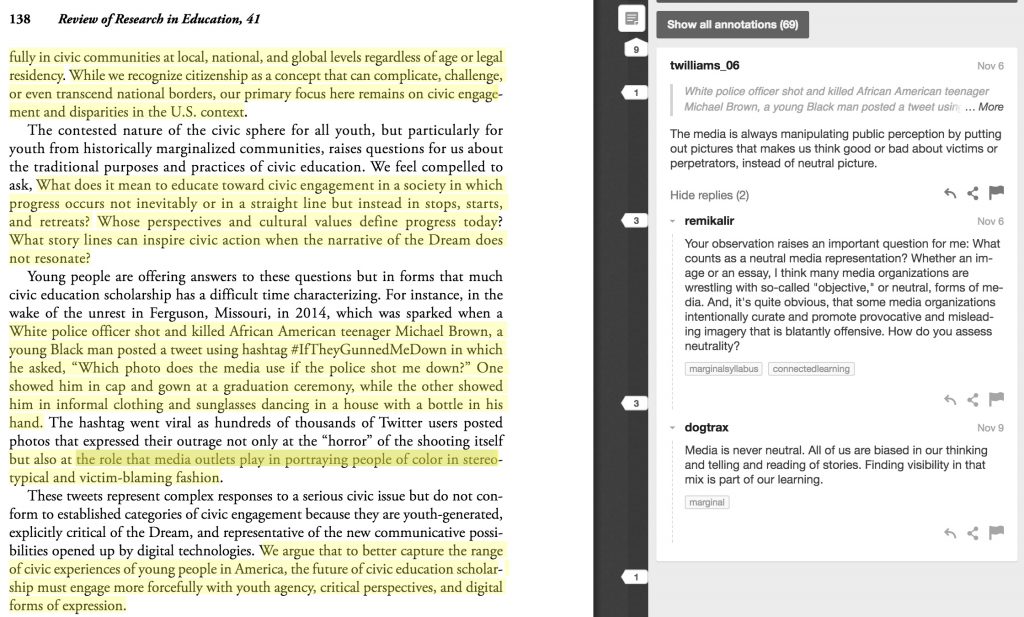 Second, I enjoyed the experience of seeing my work challenged because it helped me to clarify my arguments and consider how I might present my claims differently moving forward. A reader questioned my assertion that the development of critical consciousness should be a non-negotiable goal of critical civic learning for both teachers and students, which led to a vigorous exchange of ideas the likes of which I rarely have the chance to have face-to-face due to constraints of time and space. The exchange made me realize exactly how important this claim is to me and gave me better insight into the logic of those who disagree with me, which has been very generative for me in developing ideas for future writing.

This experience makes me long for a future (one I hope is not too far off) in which annotation becomes more prevalent across the academic community as a catalyst for public conversation. I see this process as teaching and learning made visible. I hope that this practice can help chip away at the barriers that divide universities and communities and turn scholarly monologues into democratic dialogues.