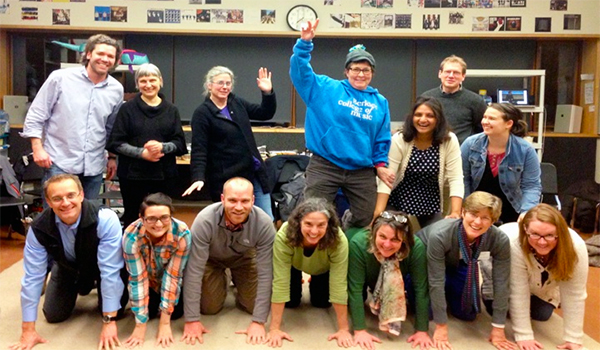 I remember vividly when I received my first account on a UNIX computer that was connected to the Internet. In the early 90s, the Internet in Germany was still in its infancy and only academic institutions and large corporations had reliable access. As a student at the time, I was mostly interested in making films, and I didn’t even own a computer, but things took a different turn.

A small black terminal window with some white text and a blinking cursor became my window to a whole new world. A world where people communicated in IRC channels across borders and time zones. Where strangers commonly helped each other with technical questions, and where sharing ideas and knowledge was the default. There was an amazing sense of community and I formed friendships that lasted many years with people who in some cases I would never meet in person.

The most wonderful educational resource is another person — not a textbook or a simulation. That is why, when the MOOC hype kicked off, I was skeptical about its potential to really improve how we learn. I noticed an emphasis on disseminating content, mostly video, but saw few affordances that allowed learners to connect with each other. In fact, many MOOCs to this day, make it artificially difficult to form and maintain communities. In most cases, access to the learning content and discussion forum — access to the community — is turned off after the course ends.

When I started collaborating with Mitchel Resnick and Natalie Rusk at the MIT Media Lab we set out to design and offer a somewhat different online course. It would be easy to say now that creating an online learning community was our intention from the start, but the truth is, we were a little surprised ourselves, surprised and excited. Learning Creative Learning, the online course we created, became a springboard for learning with family, friends, and colleagues and turned into an ongoing community.

After the first iteration of the course officially ended in May 2013, the community continued, defying the standard MOOC model. At education conferences throughout the years, Learning Creative Learning participants have been meeting up face-to-face, to extend and deepen the relationships that started online. After almost every presentation that we give these days, someone will come up afterward and tell us that they took the course. After speaking at a conference in Berlin, I learned about a group of eight local participants who had never met before the course but were still in touch with each other months after the course had ended. Mitch even got interrupted in the gym once by someone who placed a piece of paper on top of the treadmill he was using. The paper said simply: “Thank you for Learning Creative Learning.”

In 2014, we offered Learning Creative Learning for the second time. We reached out to participants from the first round and were happy to see many join again. Some of the most active ones volunteered as community mentors. But, since our courses have a strong live component, they take a lot of our time, and we can’t run them often enough. That is why we wanted to create easier pathways for people to get started on their own and with each other.

We are about to launch our first independent cohort, where learners collaborate with each other to work through a series of LCL activities. In the process they will join and interact with the existing LCL community. Each week, we will send out email prompts to those who signed up.  And, for those who would rather get started on their own, we also made all the materials available free online. We also put together a list of frequently asked questions and answers that explains how everything works.

We invite you to sign up and we are always curious to hear your feedback and input on how to improve the experience. We love to tinker with online learning and hope you will join us at http://learn.media.mit.edu/lcl/.

If you are interested in learning more about the design decisions behind Learning Creative Learning, keep an eye out for the upcoming P2PU Lab Report on the topic.