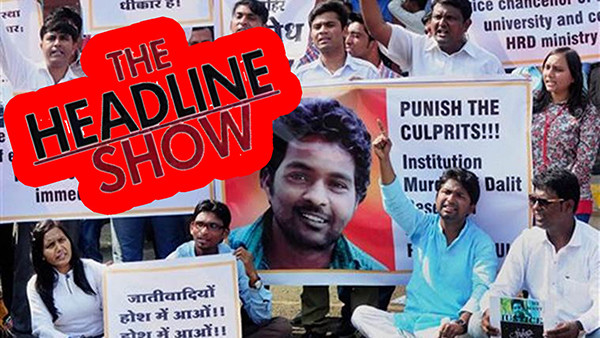 Note: This is the first of a four-part series that introduces three hashtags that seek to punctuate and puncture the techno-utopian policies and social perceptions of the forms, formats and functions of the university of the future.

I write from a condition of panic. Not of fear, not of anxiety, not of anger or indignation — all of those states offer the possibility of action, indicating the capacity to run, hide, flee, and defend. Panic, on the other hand, is a state of extreme paralysis, where the only options available seem to be unconditional despair and inaction. The panic emerges from both, the thing I want to talk about and the larger sets of unaddressed concerns that it references in our techno-missionary conversations around education and learning, in and outside of the higher education system.

On the 17th of January, 2016, Rohith Vemulla, a 26-year-old Ph.D. student at the university of Hyderabad in India, committed suicide. Rohith belonged to what is historically called a “lower caste” in the Indian Hindu society. Now, I know that caste politics are dense, and not easy to decode; quite difficult to explain. And, I am not going to try to do that. This is not a story about things in India, even though it is a story that comes from there. The caste politics are important to this particular incident, but it is a placeholder for larger systems of abuse and discrimination that take up different forms all around the world. You can insert your own category of choice here, and invoke decades and centuries of systemic and structural abuse that we have made the entitlement of differently marked bodies – bodies marked with raec, gender, sexuality, class, religion, ethnicity, nationality, and indeed, as in this instance, caste.

Vemulla belonged to a lower caste (also called Dalit) and, thus, possessed a body that is problematic to the Indian education system for many different reasons. India has a very strong affirmative action and reservation policy that has been a part of its postcolonial nation-building exercise. This affirmative action takes the shape of special reservations and benefits for people who belong to formerly discriminated castes, encouraging them in education and public sector jobs through a quota system that gives them preferential access to learning and working opportunities. Ostensibly, then, the appearance of these bodies within the higher ed system should be treated as a triumph of a social and political corrective that has been seen as a foundational responsibility and function of the public university.

However, as various Dalit-feminist scholars have pointed out, the presence and the emerging visibility of these Dalit bodies – or indeed, bodies that are marked as women or queer – has been resented by those who embody historical social, cultural and economic privilege. In fact, as Sharmila Rege has argued eloquently, the increasing presence of these differently marked bodies has precipitated the narrative of the university in a state of crisis. As we encounter more first generation learners in higher education, and more people from these communities in positions of power, there has been a growing anxiety about the university at cross-roads and in imminent need of being saved. This crisis always takes the form of a quantified rhetoric of merit and excellence, insisting that the preferential admission of these bodies in learning environments erodes the erstwhile cultures of deep thinking and high philosophy, turning education into a utilitarian tool, thus creating a demand to build a new university of the future.

Digital technologies have been presented as a sign-post at these cross-roads, showing us the direction to the future of education. And, it doesn’t take a genius to realize that these digitally inflected technologies, formed through private partnerships, conceived as expensive, and available to the small minority population that has access to digital technologies and resources, will recreate new special spaces for those who have privilege, so that Rohith Vemulla and his ilk can stay in the public university which faces increasing disinvestment from the state.

It is in the context of this imagined future of our digital learning, where the digital shall resolve the crisis that is a disguised rant about the opening up of the public university to unexpected bodies, that we need to read the death of Rohith Vemulla. Investigations have now revealed that Vemulla was targeted by upper caste administrative officials as “anti-nationa,” as a problem, as an undesired body. His acts of protest, his political participation against capital punishment, and his Dalit Right activism were all taken as tacit grounds through which he was expelled from the university, his fellowship was discontinued, and he was rendered homeless, penniless and without institutional affiliation. Throughout this process, Vemulla was not given formal reasons or platforms to negotiate and contest the decisions. Vemulla staged numerous protests, appeals and negotiations, but continued to be neglected and discriminated against by the university administrative system, leading to, what many political activists have called “institutional murder.” These acts find political support and social justification in a higher education system that turns a blind eye to these structures of abuse.

The value of a man was reduced to his immediate identity and nearest possibility. To a vote. To a number. To a thing. Never was a man treated as a mind. As a glorious thing made up of stardust. In very field, in studies, in streets, in politics, and in dying and living.

I am writing this kind of letter for the first time. My first time of a final letter. Forgive me if I fail to make sense. Maybe I was wrong, all the while, in understanding world. In understanding love, pain, life, death. There was no urgency. But I always was rushing. Desperate to start a life. All the while, some people, for them, life itself is curse. My birth is my fatal accident. I can never recover from my childhood loneliness. The unappreciated child from my past. I am not hurt at this moment. I am not sad. I am just empty. Unconcerned about myself. That’s pathetic. And that’s why I am doing this.

He was in a state of panic. All the promise of social mobility, economic stability, political voice, and an escape from the histories of underprivilege that he was born into, fell flat. His conviction that the university education system would be his way out of the conditions that he was born with and the body that he had to reconcile himself with, was betrayed. And, he found himself in such a state of paralysis, that the only way to survive was through his own death.

People may dub me as a coward. And selfish, or stupid once I am gone. I am not bothered about what I am called. I don’t believe in after-death stories, ghosts, or spirits. If there is anything at all I believe, I believe that I can travel to the stars. And know about the other worlds.

With those words scribbled neatly on a loose sheet of paper pinned to the door of a closed dorm room, Vemulla killed himself. And his death has ignited the resurgence of memories that we have lately supressed in our social and political reordering of the country. If you look at the recent developments in education reform and growth in the country, all of it has been about education through ICTs, of building new private elite universities. The National Mission for Education through Information and Communication Technologies (NMEICT), for instance, does talk about the university at cross-roads, but fails to think about the intersections that formulate the bodies that learn in our bodies of learning. The focus unfalteringly remains on building digital repositories, getting connectivity, and creating infrastructure by which we will rebuild the nation. #MakeINIndia and #DigitalIndia have become the buzzworthy hashtags that show the direction further, proposing that the only way in which we can survive the future is through digital connectivity.

Rohith’s death comes both as a shock but also as a reminder of how much this digital connectivity helps move away from memories of histories, recollections of past, configurations of discrimination, power, and abuse, because it is presumed that the cross-roads are level playing fields and that all bodies are equally equipped to deal with this new set of crisis-driven opportunities. In the process, it proposes a vocabulary and framework that moves away from politics of intersectionality to the poetics of cross-roads and connectivity, glossing over the complex mechanics that constitute the learner in our higher education systems. We have built the universities to start being digital, but we don’t yet have systems in place to accommodate for the fact that #DalitLivesMatter.