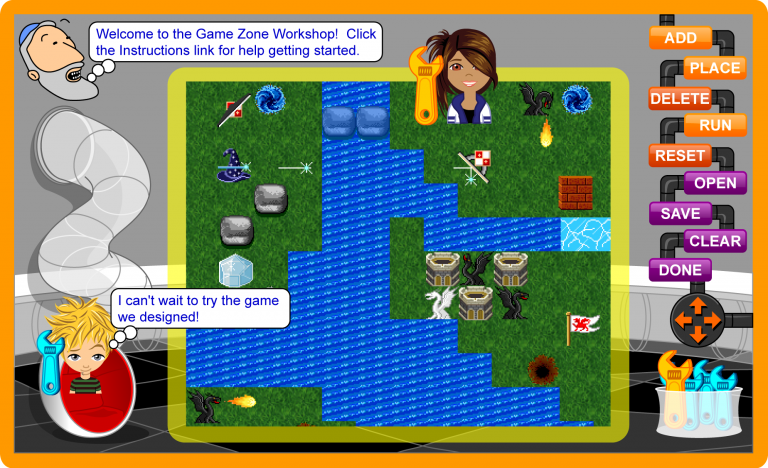 Previously, I’ve written about role-playing racial history through digital games, so it is perhaps not surprising that I would be interested in an Ellis Island MMORG or a game about the Harlem Renaissance, initially conceptualized in the research of Professor Bryan Carter of the University of Arizona. As feminist game designer and Georgia Tech Professor Celia Pearce observed, “both games are specifically designed to be intergenerational.”

In an interview for DMLcentral, Pearce noted that her background probably gave her a unique perspective. “My main experience in educational games comes from working in a museum environment, which I did primarily in the 1980s and 90s,” Pearce explained. “It was imperative to make something appealing to a mass audience” in which the parent could be the expert, but the child could also be an active participant. She credited “edutainment” pioneer Edwin Schlossberg, founder of ESI Design with helping her reach diverse audiences, and she pointed to the importance of themed environments such as the Newseum for learning in the mid-90s.

Pearce argued that far too many educational games fail to take advantage of basic research gains made in the field of games and learning. As one of the co-chairs of last year’s conference for the international Digital Games Research Association, Pearce might be uniquely positioned to comment. “What’s interesting to me about looking back to that time is that there wasn’t all the emphasis on measurement that there is now. As a game designer, I am wary of criteria for success that are very quantitative.”

In reflecting on her past experiences designing museum exhibits and experiences, Pearce described project development methods that included formative evaluation, mocking up models, and paper prototyping to see “if whatever messages we were putting out there were getting through.”

Because of the granting infrastructure that supports many government-funded educational games, Pearce contended that resources were being diverted from creative development to number-crunching assessment. She praised the National Endowment for the Arts for acknowledging “broader criteria for success,” developed through the process of evaluating documentary films that she characterized as “liberating.”

“The best learning games tend to come from passion and vision; they are not math problems. They are fun. They build community,” she said. Pearce directed would-be educational game designers to start with Whyville as a game that has “been around long enough,” has “tons of research,” and has involved “a bunch of really innovative things,” including electric cars. “The community is active, and the game is engaging with stakeholders. The bottom line is that kids like to go there, and they even go there with their grandparents, so it has intergenerational appeal.

“I don’t like making a game for one small group,” Pearce said, adding that her own research on adult peer learning in virtual worlds also shaped her game design philosophy. She cited work published for a DiGRA paper in 2009 about the “University of There” that focused on “collaboration between a community manager, who worked for the company, and players.” She described how participants first sought out educational resources for people to learn how to make things, such as how to make textures for clothing worn in the world of the simulation, which expanded into various forms of education that included lessons on 3D models, a virtual flight school, a disability program, and even a Native American studies program. Pearce marveled out how the University of There was “overwhelmingly attended and run by women; students having had experience wanted to give that back. It was all free, all volunteer. To give a class was passing on knowledge to the next generation.”

For Pearce, “the conclusions of that research confirmed the value of constructionist learning environments” in which “people have to learn things to make things” and the games are designed to encourage design. “Most people making educational games don’t use that method, even though it works for both adults and kids and is based on well-established learning theory.”

She recommended the research of Mimi Ito for more evidence of how “kids are already teaching themselves stuff.” Pearce lamented that traditional education was “mostly cramming stuff down their throats,” and asked, “Why don’t we take advantage of that and use what’s already there?”

Pearce has been one of the core founding members of the four-person feminist game design and critique collective Ludica. “Historically, one of the things that came up with Ludica was that we have this whole way of defining what is an IT field, and we don’t often include art, virtual reality, and computer graphics; ‘artists’ are not considered IT workers.” Thus, according to Pearce, media researchers “don’t give them the credit they deserve for being technology savvy.”

Pearce observed wryly, “art is a gateway drug for women; they will start with fashion as their first foray into creative practice, and then expand into furniture, music, and setting up servers.” She lamented that “in an anti-art climate” there is a tendency to “not take advantage of the incredible attractor that art can be to technology. STEAM (science, technology, engineering, ART and math) is important from a feminist perspective, because it brings together gender, technology and learning.” She cited the research of Yasmin Kafai on creative activities for girls and the “flaws of technological initiatives that are inadvertently pushing women out.”

One of Pearce’s most recent projects was mounting the XYZ exhibit in Atlanta to showcase the contributions of women to the game industry. “It was actually originally conceived of by Akira Thompson, a former Disney Imagineer,” who was concerned that women’s contributions to the game industry weren’t being recognized. “This show was setting the record straight and correcting the misguided misperception that women don’t make games, and if they do they don’t make mainstream games, but are only making games for girls. To show the diversity of games that women worked on, we had a timeline on the wall going back to the beginning of the industry. The exhibit included art games, such as The Night Journey, The Path, Dysphoria, and the non-digital game Train, but there were also bestselling commercial games. We showed Journey from That Game Company and LittleBigPlanet — two huge commercial hits on PlayStation — and games that ranged from Nancy Drew to Skylanders. We showed games from some of the strongest female-led teams in the history of games, from people who were making major contributions across the board, designers like Brenda Brathwaite, Tale of Tales’ Aureia Harvey and Parson’s PETlab’s Colleen Macklin. By showing that women are video game designers, we validated girls playing games and loving games, along with math and science, so that 10-year-old daughters could have powerful role models.”

Pearce, well-known for her role as co-founder and festival chair of the independent games festival IndieCade for a number of years, added: “I had been working with Stephanie Barish since 2005, and we started IndieCade in 2008. We noticed that there were many different ‘summits’ at the Game Developers Conference — student, casual, serious and mobile, but they were all segregated into separate categories, even though they all included indie games.” They started with a booth at the E3 Expo to showcase an “amazing mix of games.”

“Many game festivals did not even consider educational games indie,” she said, although asserting that quality educational games, such as Whyville and Global Conflicts Palestine would get rave reviews from players. “I thought they should all be judged by the same standards. The way we treat these games at IndieCade, they actually have a chance to be seen as more mainstream or representative of the community at large, rather than being pigeonholed as educational games, and I’m proud that IndieCade has expanded the definition of ‘indie.’ Diversifying genres is also a way to diversify participation. Women and minorities are more active in educational and serious games, so including them as indie games is a great formula for expanding inclusiveness.”