Times of crisis are times of change and provide an opportunity to imagine alternative educational futures. Following the UK’s winter of protests about cuts to education budgets and rising tuition fees, students and staff are raising questions about what kind of education they are fighting for. Even before tuition fees were introduced, access to higher education was exclusive, with young people from well off backgrounds disproportionately represented. With the value of higher education increasingly framed as a financial investment that pays off against future earnings, there is much about the current system that many would not want to preserve.

“Torrent your syllabus, duplicate your id cards and give them to strangers, scan your entire library and post it [online], distribute maps of your university online, relocate your seminars to a space outside of the institution.”

As with the Napster analogy, digitizing content makes it much easier to distribute, but this radical manifesto is also revealing in terms of what education is seen to consist of. 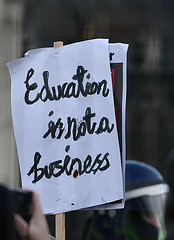 There is no mention of accreditation, though it can be argued that it is just as much the qualification as the process of education that is the currency in which students are asked to invest. Education is described in terms of its artifacts, often digital: a syllabus, a reading list, texts and tasks. In a world in which online learning environments can be hacked, and many books can be accessed online and often for free, there is a question about what a higher education constitutes beyond a reading list, library card, and online access to academic journals.

But focusing on these artifacts misses much of what we value about education – particularly the social context in which we learn with others, testing out new ideas in debate, collaborating with peers, experiencing mentorship and participating in a wider community.

This social context of learning gives meaning to our knowledge. There are, of course, many examples of social and collaborative learning situated in digital media environments. Howard Rheingold’s “DIYU” experiment in higher education provides a non-institutional online course in which the reading lists and course texts are open access, but participation in shared discussion spaces and online seminars is charged for.

What is the Purpose of Education?

This debate needs to take place in a public arena in which teachers, learners, parents, educationalists, and all those with an interest in education are able to participate, to listen, to understand, and possibly begin to work through some of their differences.

This is what Purpose/Ed aims to do, kicking off with an online debate: starting debates on Twitter, inviting 500-word blog posts and discussions on the purpose of education and aiming for a series of events that will see a critical mass publicly debating education that will be impossible to ignore.

The public nature of this debate is important: it is not confined to the relatively exclusive and restricted corridors of government or the ivory tower of academia.

The fact that this campaign is initiated through social media points to the importance of the digital publics as spaces for debate, though ultimately it will also need to go beyond these channels to reach a more inclusive audience.

One answer to the question about the purposes and values of education is that it should enable young people to learn to participate in public spaces in which they work with other students and teachers to negotiate and collectively determine the direction of their own institution and learning. 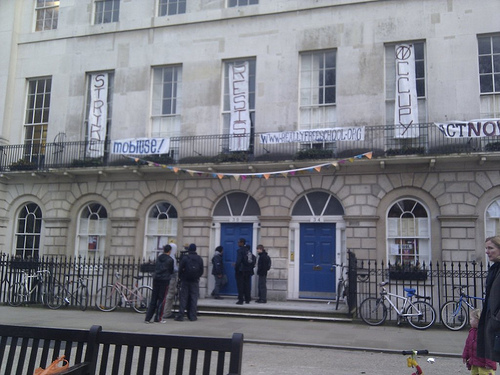 Claiming public space for education is also at the heart of the Really Free School, which since the beginning of the year has so far occupied three unused buildings in London.

It is an open space in which people can propose lessons, talks, workshops and anyone can come along to learn. The Really Free School is free not just because it does not charge for education, but also because there is no central control of what is taught or who is allowed to learn. It invites people to “come and engage in a collective learning process directed by your own desires, ideas, questions and problems.”

In a time when many are questioning the future of our current educational systems, the act of appropriating unused buildings to provide public spaces for free education is a provocation to think about what a “really free” education could be. As with much of the wider student movement, the Really Free School makes extensive use of digital tools to organize a large number of people in fluid, ad hoc ways, moving between social connections in digital public spaces and action in real public spaces.

The committed engagement of different generations and the opening up of possibilities in such digital and real public spaces constitute an exciting moment in which alternative educations can be imagined.

Digital media provide new, fluid possibilities for mobilizing networks of individuals to collectively work for an education that is free in every respect: not just in terms of price, but also in terms of being an inclusive and democratic freedom for learners, teachers, and communities to reconstitute their own education.