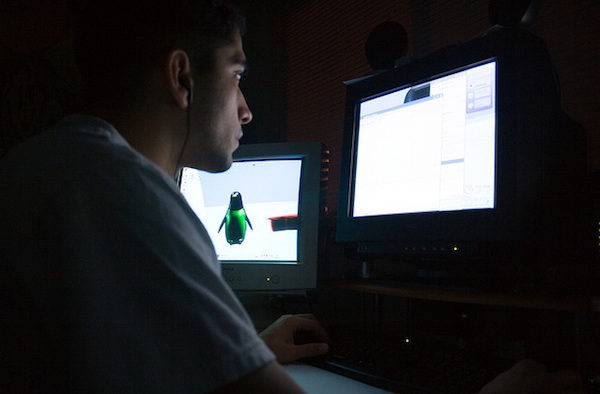 About ten years ago, the designers Dan O’Sullivan and Tom Igoe asked the question “how does the computer see us?” The striking image of a hand with one finger, one eye, and two ears that they produced as a response to this question—a simple yet weirdly obscene finger-eye-being—reminds us that the technologies we create carry built-in assumptions about the people who will use them. Computer technology interacts with us as its designers have instructed and programmed it to see and identify us.

Now that software has flooded into every aspect of existence to mediate and augment the ways we think and act in our everyday lives, it is playing an increasingly influential role in how we identify ourselves and how we think about our identities.

So when we ask key identity questions like “who do I think I am?” and “where am I heading in the future?” it is important to ask whether our answers to such questions might be influenced and shaped by software. We are, of course, in symmetrical relationships with technology—understood sociotechnically, we shape it/it shapes us—so the way we think about ourselves and about our identities runs parallel to the way we think about different technologies, devices and software. In this sense, software co-produces our identities. It mirrors how we think about who we are, what we consider our place in the world, and what we want to be. How software sees us is playing a part in shaping how we see ourselves and how we think, act, and live our lives.

So how might the ways that software identifies and sees us be paralleling and co-producing how we think about learning identities?

Identities are not fixed or static. As social theorists have been telling us for years, we are actively involved in constructing fluid, plural and hybrid identities by combining a range of different building materials, resources and representations that are available to us. Our identities constantly need to be assembled, something like IKEA flat-pack furniture or Lego construction kits. The task of assembling ourselves requires us to work upon our identities as an “enterprise,” to become self-making, self-transforming, and self-reinventing. Thinking in the language of learning, we could say that identities have to be learnt as a lifelong project—we are constantly learning our identities. The idea of learning identities therefore has a double meaning: our identities are shaped by our learning experiences, but the construction of our identities also depends on constant ongoing learning.

An important identity construct promoted in the area of digital media and learning is that of the do-it-yourself portfolio builder. James Gee has written about “shape-shifting portfolio people” who think and act in terms of their résumé, and as entrepreneurial free agents who manage their own selves as if they were projects or businesses. Portfolio people depend on their portfolio of skills, experiences and achievements, but are able to rearrange those attributes in order to shape-shift into different identities.

The most important element in this argument, though, is that traditional schools are not effective at promoting a portfolio identity. Videogames are the ideal vehicle for promoting shape-shifting portfolio people. For Gee, the significance of videogames is that they involve players in the construction of a “projective identity.” A projective identity comes from real-world players projecting their values and desires on to virtual characters, and on working on a virtual identity as a personal project in the making. Videogames software is positioned by this account as a resource for the structuring of a particular kind of learning identity, that of the shape-shifter who constructs and manages his or her identity as a portfolio.

In this example, software sees learners as collections of DIY projects.

The idea of “wikidentities” suggested by Kerry Mallan and Natasha Giardina describes the kind of identities that are constructed and promoted by social media, social network sites and other online spaces. These technologies encourage us to view identity as something like a wiki—an editable and customizable webpage—and to conceive, represent and address ourselves as if we possess manipulable identities that are networked and worked on by multiple members of a social network. According to Mallan and Guiardina:

The collaborative approach to identity construction undertaken in SNS provides a space whereby an identity is “assembled” by drawing on a diverse set of materials and tools. When an individual or a group constructs an online profile, the resultant “identity” gives a particular interpretation or representation. Consequently, this “wikidentity” becomes a particular, collaborative process that changes according to purpose, context, and form.

The kinds of technologically-mediated learning identities associated with wiki-like behavior might be defined by new identity questions such as: “Who do I think I am…in my Second Life?” “What is my place…in World of Warcraft?” and “Who do I want to become…on Facebook?” These kinds of identities are not assembled by individuals working on their own portfolios, but are collaboratively constructed in extended and technologically mediated social networks.

The networked learning identity is reflected in the ideal of the connected learner constantly involved in “identity work” through various forms of flexible activity, network literacies, digitally mediated pedagogies, and participation in diverse forms of culture and community.

Today there is a growing interest in promoting computer programming to young people. The proliferation of “code clubs” and other programming-related activities is putting forward a new way for learners to think about themselves. For example, the Make Things Do Stuff initiative very clearly constructs an identity position of the “digital maker” who, through various forms of programming, coding, hacking, and remixing, is able to see his or her identity as much more than a digital consumer.

In terms of assembling learning identities, there is continuity between these arguments in support of learning to write computer code, and Manuel Castells’ ideas about “self-programmable” workers with the “autonomy” and “creative capacity” to improve themselves:

Self-programmable labor is equipped with the ability to retrain itself, and adapt to new tasks, new processes and new sources of information, as technology, demand, and management speed up their rate of change.

Self-programmers are autonomous, flexible and adaptable; able to constantly self-improve, modify and upgrade their skill sets throughout their lives; they are proactively responsible for themselves and have a future-facing outlook; and are lifelong learners who are perceived to be the source of valuable innovation and knowledge in a technologically intensive society. According to this view, education systems must dedicate their efforts to the education of self-programming individuals.

The current emphasis on learning through programming appears, at least partly, to promote the learning identity of an active and self-responsible learner, whose creative capacity for computer coding is paralleled by a capacity for autonomous self-improvement through digital technologies of the self. Programming code is mirrored by the capacity of the individual to self-program through constant learning. This is close to the idea of the “programmable self” and the idea that you can “program your own body by combining what we know about your brain with the data that your phone and its friends can generate about your health, wealth, and well-being.”

With the emphasis on learning to code, software sees learners as self-programmers.

The fourth kind of softwarized learning identity being promoted is an “algorithmic identity.” In this identity construction, how software sees us is especially significant. This is because an algorithmic identity is not conferred or promoted through the activities of people, but identified through the computational processes and procedures of database-driven software and the collection and analysis of personal information and behavioral data from users’ surveilled Internet history. These database technologies are today significant since many aspects of the contemporary world depend on database architectures and database management techniques and the technical processes of ordering, sorting, counting, and calculating that they mediate.

The idea of an algorithmic learning identity is becoming a reality as database-driven technologies such as learning analytics and adaptive self-learning software become increasingly mainstream. Learning analytics has been described as a “digital nervous system” for education, an artificial brain or a collective intelligence that can observe, analyze and identify a learner’s activity, provide real-time feedback, and adapt the learners’ future behavior accordingly.

Advocates of learning analytics propose to use data-based techniques of data mining, adaptive technologies, and predictive modeling in order to develop new smart learning software, personalized curricula, and intelligent tutoring systems. Through learning analytics and self-learning software, individual learners are to be disassembled into sets of specific transactions or interactions and reassembled as data that can be calculated in order to generate new learning experiences. This identifies learners not as bodies and brains, but as calculable data resources to be utilized for the automatic production of pedagogy.

From the perspective of analytics, software sees learners as data that is amenable to calculation through algorithmic procedures.

These four types of learning identities are being sculpted, structured, and promoted for a softwarized society. A softwarized society is one in which software has begun to transform and reconfigure the world it inhabits, even to influence how we think about ourselves and our identities. Significantly, this means that the ways in which software sees us—the assumptions about human users that are programmed into software—have the potential to exert real effects on how we represent, address and act upon ourselves.

With the increasing sophistication of “smart” or “intelligent” database-driven applications, software is able to see us with more and more fidelity, seemingly even to see right into our minds through the proxies of our personal information and our behavioral data. Software is learning to identify us, and we must learn how to identify ourselves.