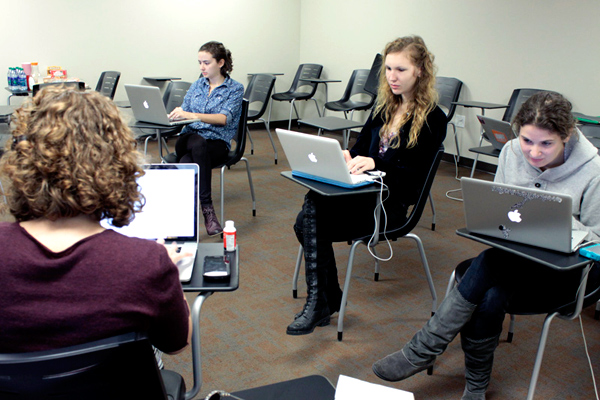 Wikipedia is often not thought of as a platform for pedagogy since so many teachers explicitly tell their students to steer clear of the site as a source of information. However, as a site for learner-driven inquiry and informal education, it is without question the chief reference point for many discussions from matters of general knowledge to areas of arcane expertise.

Adrianne Wadewitz would like to provide more explicit instruction about not only reading Wikipedia but also writing Wikipedia in the classroom context. She has helped write a helpful brochure from the Wikimedia Foundation on “How to Use Wikipedia as a Teaching Tool” to provide more opportunities for classrooms to engage with the popular collectively authored online reference work. Wadewitz has authored the bulk of several large Wikipedia entries based on credibility that she earned contributing her labor to smaller edits over the years and advises others to learn the craft of collaborative editing before tackling major writing projects. 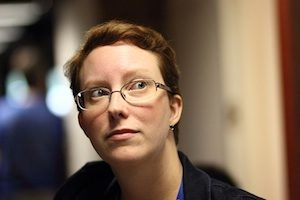 Wadewitz has provided workshops about effective Wikipedia interventions at more than a dozen institutions in recent years. She sat down for an interview shortly after leading the Global Women Wikipedia Write-In at UCLA, which she described as an important event as a model for everyday civic engagement as “a type of writing into history and into the current record what we value in our world.” (More information about the event is here at The Chronicle of Higher Education.

When asked to identify the most common mistakes instructors make when assigning students to contribute to Wikipedia, Wadewitz argued that “the biggest one is not understanding that the encyclopedia is made up of editors.” While an “old-fashioned” reference work like Britannica can be approached naively as “just entries that you go to and read” without serious consequences, “the essence of Wikipedia is the community,” which means respecting “its efforts” and understanding how “a global group of editors” might “work collaboratively” and “to think about it ahead of time.”

Wadewitz described a wide range of successful prompts for teachers and instructors. She characterized the most common assignment given to students as “to research a topic and write an article – for example in a neuroscience class.” Such assignments might replace a conventional research paper. However, although many of the norms about writing and editing already in place in a traditional classroom setting are transferable to Wikipedia, significant adaptations are usually necessary, and instructors need to allot enough time for the task as a capstone assignment meriting sustained attention.

Such assignments aren’t limited to college students, according to Wadewitz. “We’ve had high school teachers do Wikipedia projects. The ones I’ve seen are in the sciences, such as researching a particular insect or bird.” These assignments benefit from the fact that there is a “strong structure” existing for such entries, and students can “go out and take pictures” and collect information about habitat, diet, or reproduction from other sources. Such assignments model “how you learn biology” and can “make them little scientists.” Furthermore, learning about the scientific literature describing a particular animal is often manageable for students as young as the 10th grade and generally requires less expertise than a topic like DNA biochemistry.

Wadewitz also described assignments that ask students to “read an article and figure out what is missing,” since the “most common error” in Wikipedia articles is “that they are incomplete.” She recommended going to the talk page of the article to find out if editors have already identified potential shortcomings for future work.

In addition to figuring out what kind of information should be in the article, Wadewitz argued that “copyediting typos” and “fixing spelling mistakes” was hardly a trivial matter. For example, although sentence level work might sound insignificant, “making all the pronouns in an article gender-neutral” might be “a very important change to make.” Furthermore, as Wadewitz pointed out, “there is nothing like copyediting to make you a better writer, and there is nothing like practice to improve writing.” She describes how “even 10-13 year olds will write every day on Wikipedia” and make substantive contributions about movies and videogames.

Wadewitz observed that “multimedia is one of the places where people can contribute the most by Wikipedia.” Because all images must either be covered by a Creative Commons share-alike license or be in the public domain, it can be difficult to locate usable primary sources “in the world of the web.” This requires helpful editors to create images, maps, or diagrams, such as those of the human body. Such content “would need to be created by users and donated,” which can be tricky when such illustrating know-how is not common. Similarly, “recordings of music under copyright unless people donate them.” (Rights regarding composition and rights regarding performance can make musical licensing very tricky, of course). In particular, she noted how useful it can be to have “videos illustrating dance steps,” because “a little video clip that someone has donated makes the dance moves much clearer.” Compared to commercial reference works, Wadewitz said Wikipedia was “poor on the multimedia side since it can’t license content” in the way profit-earning sites can.

When asked to identify common mistakes made on the side of instructors, she pointed out that “not taking enough time to design an assignment” could be a fatal error committed by novices, particularly those who are excited by the potential for participatory learning. Diving right in and learning by trial and error “works for a lot of technology,” but “with Wikipedia you are engaging with a lot of people on the other end,” so you need to articulate feasible learning goals that respect existing community practices.

Although a brief Wikipedia article might seem to be easier than “a twenty-page research paper” to compose, it is actually “extremely difficult for students to write an article” in its entirety, even if the instructor generates “a timeline for students and tells them exactly what is expected of them,” since “there are many skills to learn, much preparation required, and everybody’s learning.” She warned that students know more about composing in familiar genres such as the academic essay and often don’t recognize conventions in Wikipedia articles.

(With my own Wikipedia assignment for UC San Diego first-year students, I only ask students to create an article appropriate to Wikipedia rather than have them edit “live” on the site. I find that just locating appropriate Wikipedia articles to link to can be challenging, even with a classroom practice lesson on working with hyperlinks as a warm-up. As an alternative, instructors can have writers practice in a Wikipedia sandbox site where their novice status is less likely to raise the ire of more experienced editors).

In arranging these recent “Wikistorming” events on different campuses, Wadewitz specifically has been advocating for Wikipedia edits that target feminist concerns. As she explained, “the point of doing feminist outreach is you need to find not only women but also feminists. Right now only 10 percent of editors are women, but just because we recruit more women doesn’t mean we recruit more feminists.” In considering who gets “written out of history” she wants to encourage active questioning of “the structures of knowledge.” She reminded readers that feminists can be male or female as they offer “new perspectives” rather than merely “replicate the structures of the past.” Specialized databases behind paywalls may make this information available to scholars, but the common knowledge that drives many Wikipedia searches isn’t well served if information isn’t free.

Such activism poses a potential problem for Wikipedia’s dictum about “no original research,” but Wadewitz argues that Wikipedia templates and conventions are capacious enough to cite new kinds of sources and to incorporate new information to build a better global reference work than existing print sources. She admitted, however, that “every edit is political,” because “you can’t put in every piece of information and you can’t use every source.” For example, her entry on the female rock climber Lynne Hill included a section about gender politics, and she arranged Hill’s story about being discriminated against with a whole section devoted to the topic, “because I study gender and think about it in this way.” Her entries on Mary Wollstonecraft and Jane Austen “would have looked different” if generated by another scholar, but she asserted that her approach was actually more consistent with the Wikipedia philosophy governing men’s entries by going beyond biography to address the contributions made by these women’s work as writers. In a recent blog post she described the work being done and yet to be done to address the gender gap in more detail.

Many people have only become recently aware of these issues because of the recent Op-Ed piece in The New York Times that blasted the site for taking notable female authors out of the listings for “America Novelists” to consign them to “American Women Novelists” and making the “American Novelists” page effectively all male. Wadewitz emphasized the fact that “Wikipedians were actually being reasonable” by deliberating about the issue and reaching a gender neutral solution with almost unanimous agreement, although she does not regret the fact that the snafu “generated immense press interest in the problem of gender on Wikipedia.”

You can see photo documentation from one of Wadewitz’s Wikistorming events here.

A sad update: Adrianne Wadewitz died in an accident on March 29, 2014.