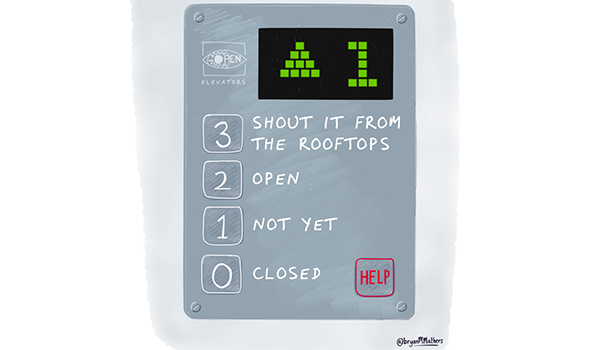 Is working “open” the binary opposite of “closed” ways of working? Could it be that it’s as simple as flicking some kind of switch for your organisation or institution to begin embracing open working practices? Matt Thompson, a former colleague at Mozilla, doesn’t think so. Building on a post he wrote five years ago entitled simply “How to work open,” Matt has recently encouraged us to start small — using the metaphor of a dimmer switch to explain his point. Another metaphor we might want to use is of an elevator, as Bryan Mathers has used in his image above.

Applied to education, I see Matt’s “spectrum of open” as on a different axis than the traditional/progressive divide. That is to say, it’s an approach that works well whatever your beliefs about the specific ends of education. I’m assuming that it’s uncontroversial to state that one general reason that we as educators are involved in the field is because we care about the learning and development of other people. I’d argue that part of this means trying to create a better world for the next generation. Working openly can help with that.

Every time we don’t have the right people in the room to make a decision, every time we have to request access to a document, and every time we have to ask permission to make a positive change, we suffer friction. Working open reduces this friction. To use yet another metaphor, working open massively enlarges the size of the “room” available for the discussion of ideas. Instead of getting the knowledge, experience, and opinions of people you already know can contribute effectively, working open allows you to harness the power of those you perhaps don’t know.

So, what does it mean to work open? Laura Hilliger, who writes on this area for opensource.com, and is a co-founder of a co-operative we have set up, explains this well as part of a collaborative course, Teaching and Learning in Open Spaces, she put together:

The term openness is a confluence of technical, cultural and social definitions that can get meta pretty quickly. Nevertheless, there are several tenets of openness that apply to the technical implementation as well as the social and cultural usage of the Web.

Each of these is a challenge to existing, hierarchical, status-quo ways of doing things. Returning to Matt’s spectrum of open, the opposite of working open is (unsurprisingly) “closed”: everything is centralized, information is on a need-to-know basis, and you have no authority to change anything without permission.

It’s worth saying that there’s a difference between a project or initiative being publicly accessible and being publicly promoted. It’s the difference between the top two options on the “spectrum of open”, as illustrated by Bryan. Those new to working open assume that as soon as they put something “out there,” then everyone will be paying attention to it, which is often far from the truth of the matter:

Some people never leave their house unless they look perfect. Others go to work in shorts and sandals. The question of “when to be open” is kind of like “when do we want to be perfectly polished and where do we get to hang out in our pajamas?” — Teaching and Learning in Open Spaces course

In other words, you’d be wise to adopt the “mullet” strategy: nice and tidy at the front but long and straggly at the back! In practice, and to mix metaphors this means having a canonical place to point people toward that looks like a well-tended garden. This, then, links to messier spaces where those involved can “get into the weeds” of the project. For those interested, there’s plenty of nuance involved when designing an “architecture of participation.”

The Benefits of Working Open in Education

I won’t deny that there may be legitimate reasons for, on occasion, using closed-source software, privileging top-down decision-making, and restricting access to resources in an educational context. However, this shouldn’t be our default setting. We should be continually asking the question, “can we make this public?” If that seems too radical, then a smaller step might be the question, “is there any reason why this shouldn’t be shared with everyone at the organisation?”

Returning again to the “spectrum of open” illustrated at the top of this post, something that kills innovation stone dead in organisations is the response “not yet.” As Matt explains:

SOON. We want to work open — but we’re not ready yet. We’re not ready for widespread attention. Or can’t meaningfully absorb offers from people to help. So let’s wait until we are.

This is a totally reasonable gear to operate in — but can also become a trap or semi-permanent holding pattern. Without forcing functions or test cases, it’s a recipe for going slow.

Working open involves a shift in skillsets, for sure. But, the most important shift is in mindsets. It’s easy to assume that people are out to “steal” our ideas, to criticise our work-in-progress, or to belittle our contributions. Taking the bold step to working open shows this to be almost entirely false. Some things have to be experienced to be believed. After all, it’s impossible to prove a negative, that something won’t happen!

There’s so much that would make our working lives easier if we worked more openly. While there are many structural problems in the marketised education industry, working openly is a way to resist increased corporatisation of a public good. More than “efficiency” or “removing barriers,” working open means standing in solidarity alongside your colleagues and those who believe in the same mission as you. It means working together, trusting one another, and being part of a community.

Innovation comes from the edges of organisations and communities, so it’s unlikely that you already know where the best ideas reside. Why not try inviting comments from everyone connected with your institution or organisation next time you’re drafting a new policy? How about throwing open the doors (perhaps virtually?) of your next meeting? As Matt suggests, why not imagine that you’re with a group of friends in a crowded restaurant: others might hear you, but who cares? What’s the worst that could happen? Does the potential downside outweigh the upside?

Good things happen slowly; bad things happen quickly. It’s easier to tear down than build up. What’s the smallest thing you could do to work more openly in your organisation?

Banner image: CC BY-ND Bryan Mathers
Many thanks to Matt Thompson and Laura Hilliger for comments and suggestions on an earlier draft.