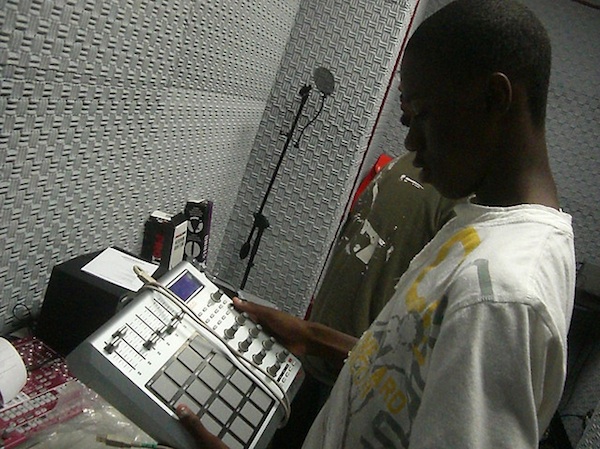 In this post I want to think about our intimate relationship with various kinds of software as a way of understanding the development of skills and practices. I want to take the unusual approach of telling the story of a ‘creative life in software’ – building on Brigid Barron’s development of ‘techno-biographies’ as a way of gaining insight into learning over time and across contexts. I want us to think beyond the more self-evident fact that engaging with software is crucial in the development of all sorts of individual capabilities and competencies to how we might want to use different kinds of software across young people’s learning lives.

I became interested in this theme chatting to my friend Gary Stewart – an accomplished multimedia artist. I don’t know about the US but in the UK there is a popular radio program called ‘Desert Island Discs’ where well-known figures choose seven ‘songs’ to represent their life as if they were fictitiously marooned on a desert island. Gary and I wondered if instead of choosing this form of cultural capital we had chosen seven software programs to represent different stages of our lives. At this time of year these kinds of parlour games are popular but because access to and ownership of digital technology had marked the decades in our lives it became a way of talking about the relationship between creative affordances and creative practices. How had particular software programs changed or made possible different kinds of creative expression? And how had such potentialities inhibited, constrained or opened up different kinds of expression and communication?

Gary and I were particularly taken by the fact that we have an historical perspective on software – including writing, performing and in Gary’s case music, and visual art made and imagined in pre-digital formats. It is difficult to recreate the excitement and importance of being able to do something digitally that had not been possible before: Gary for example, does a lot of VJ work which is inconceivable as a non-digital form. We recalled MacPaint and MacWrite from the 1980’s and Gary, who is a musician as well as a visual artist, was keen initially to stress the interconnectedness of early key hardware peripherals – the AgfaScan black and white scanner, facilitating desktop publishing or the Spectrum ZX81Computer & ZON X-81 Programmable Sound Generator enabling sound effect control under BASIC program control for music production. Once we had let go of our memories of early pieces of equipment the software began to roll.

In a classic geek fashion Gary divided up his knowledge around the decades and there is a certain pleasure to be derived from recalling arcane and abstruse manufacturers and brands. We won’t bore you with all of the names here but a number of key features structured the list. First of all there is the question of which brands have survived and why, and this is related to the second point that early adopters explore many options in the marketplace which then contracts around key core brands. Individuals also narrate a role for themselves in the early ecology of software itself – Gary had brought back some of the first copies of Kidpix and The Playroom to the UK after his visit to San Francisco in the 1990s. He further listed six or seven early music programs of which a few like the early SoundEditPro on the Mac fell by the way but others like Sound Tools went on to become Pro Tools. This feature of tracking programs that endured albeit under different ownership is interesting. Equally older functions appear to completely disappear as they have become absorbed in new processes. So in the 1980s and 1990s the impact of publishing programs was enormous as was the interest in forms of animation but to some extent new processes have become far more integrated in current manifestations. As we looked at the lists together we could see a process of standardisation where certain programs like Photoshop come to stand for a type of activity, and where the name of the program acts as a metonym for the creative process itself. Equally the lists show the ebb and flow of the market as smaller names disappear and are absorbed by the giant software companies we know today.

Part of the point of these kinds of narratives is the learning progressions that the autobiographical narrative constructs. Gary was keen to stress that the very business oriented Lotus 1-2-3, and VisiCalc on the Apple II were absolutely fundamental in that it was working with those programs that enabled him to imagine the whole conception of programmability in the first place. Secondly, he wanted to enumerate all the different synthesiser and sampling modules and programmes as well as the technology in which they were frequently embedded, (the Emu Emax audio sampler or the Casio RX1 sampling drum machine) to show how his pre-existing interest in making music led him to explicitly experiment with and learn from the new possibilities that were emerging at that time. This approach to music making was mirrored when he took up VJ’ing in the first years of this century (ArKaos, VDMX, Modul8) but was also evident as a kind of disciplined approach in relationship to multimedia scripting and programming interactivity (Director, SuperCard, HyperCard Max/MSP). In tracing these histories we can see a movement between technological affordances (what the software can do and makes it possible to do) and creative practices (the relationship of genres and modes of communication across media that characterise cultural expression).

There is also the question of how this range and variety of software packages both posed challenges for Gary as an artist – how he learned to accommodate the changing potentialities of the software – and as a learner: how he learned to learn both the mechanics and the uses of this huge list of software programs. In his narrative the movement between repetition, contrast and comparison clearly influenced his ability to engage with and make use of new programs when they came on the market. There was something almost ‘developmentalist’ or ‘evolutionary’ in his story as generic processes worked across competing programs at the same time as commonalties made it easier to pick up new programs. Finally there was almost an idea of cumulative progression, that learning one program enables you to build on it as you move forward and this idea I think is very important for the programs that we offer to young people and how we expect them to develop similar stories of mastery and control.

From the current retrospective vantage point we could see considerable repetition, reiteration and the recapitulation of similar processes in different programs. Some of the programs like Photoshop or Cubase have stuck even when they have been rewritten from the ground upwards whilst others have vanished and yet others again promised different functionality but have ended up repeating what was already available.

Listening to this story of a creative life in software and hearing how the different programs made important differences enabling the creation of new and different kinds of output for Gary made me realise that what Lev Manovich has recently called a cultural history of software would also have resonance as a way of explaining learning and educational pathways. That the kind of biography we hope we have suggested here is one way of tracking and marking evolving skills and practices. Gary may be exceptional as an artist and as a practitioner and he certainly lived through an extraordinary period of technological development. However, we can also learn that having access to this variety and range of software, that engaging with new software cumulatively and progressively over time and by having access to a range of specialist programmes around key domains – be they music, image-based or whatever – clearly support a different quality of learning and engagement with making and expression. For me this is one of the most important implications from this life in software, that we need to be able to introduce new programs that have variety, range and difficulty for learners and that such challenges need to be at the heart of any curriculum of the future. Furthermore, given the current vogue for teaching and learning code, paying attention to software in this fashion may also be an interesting complement in any attempt to understand what learning digital media is all about.