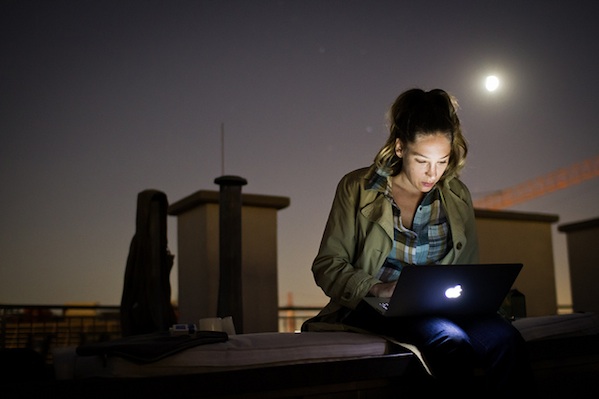 Professor Anne Balsamo has been collaborating with Professor Alexandra Juhasz and a group of more than one hundred feminist scholars to pilot a new kind of online course devoted to feminist dialogues on technology.

Balsamo recently left the University of Southern California to occupy a new post as dean of the School of Media Studies at the New School for Public Engagement in New York.  In this position she will continue to work on one of her other ambitious new projects that involves collaboration with an extended network of researchers and designers to create a digital archive for the AIDS Memorial Quilt.  The Quilt is an important document of the history of human rights activism in the US and the DIY creativity that has characterized the global response to the disease.  Balsamo is the lead experience designer of the Quilt Digital Experiences.  In creating these applications, she and her collaborators faced many technical and scholarly challenges to design an appropriate set of interactive experiences that would augment the public appreciation of the textile Quilt.  The Quilt Digital Experiences Project presents several applications that enable visitors to search, browse, and comment on the Quilt, by providing access to a digital database of images of the more than 48,000 Quilt panels that are now part of the entire effort.

In an interview that complements my earlier interview with Juhasz, Balsamo reflected on the efforts involved in creating expansive networked projects that engage many participants in different contexts and roles.  The FemTechNet project — which was first conceptualized by Juhasz and Balsamo during friendly conversations in early 2011 — has an ambitious objective:  to create a course focused on the topics of feminism, science and technology, offered simultaneously around the globe by feminist teachers in different locations, supported by a shared network of learning materials, of digital resources, of participants, and of pedagogical activities.  This high-profile venture takes shape as a Massively Collaborative Online Learning Experiment:  it is a feminist manifestation and reinvention of a MOOC.  The risky but exciting “learning experiment” takes form as follows:  During September — December 2013, instructors around the world offer courses at their home institutions on the topic of “Feminist Dialogues on Technology and Science.”  The courses are created using a shared set of learning resources:  a series of eight videotaped “dialogues” among prominent feminist scholars of science and technology; a repository of digital learning materials; asynchronous online conversations; and collaborative activity called “Storming WikiPedia” — designed to write feminism and feminists back into the collective digital archive of important knowledge.  Students can enroll in courses at a particular institution for credit; or they can arrange to take an independent study elsewhere with a supportive faculty member; or they can participate as self-directed learners, or as “drop-in” learners.  The goal is to engage one hundred feminist teachers and thousands of students around the world.

Balsamo pointed out that the group involved in this effort would benefit, however, from lessons learned in a number of other recent experiments, including the advocacy organization and associated fair use database of video clips Critical Commons, the media-rich scholarly publishing platform Scalar, the radically open electronic publishing project of Liquid Books and Liquid Journals, and initiatives from the Institute for the Future of the Book, which embraces new kinds of collaboration and review.  “We seek to explore not only new forms of knowledge production, but also new forms of learning materials aka textbooks.”

Despite the visual appeal of incorporating video and images, Balsamo cautioned against seeing FemTechNet as a project about popularizing complex forms of theoretical knowledge into easy-to-digest or “snackable” podcasts.  The challenge is to explore new ways of expressing and communicating knowledge, insight, theoretical discussion, analysis and reflection.  Somewhere between the easy-to-digest “snackable” podcasts and the more complex aesthetic creations in a journal such as Vectors for example is the sweet spot for designing new digital learning materials.  Balsamo:  “New modes of knowledge representation are always going to strain people’s ability to make sense of what they are seeing — new modes of expression, new genres provoke people to ask questions like, how do I read this?  The challenge is to create the provocation without swamping people’s tolerance for deciphering new forms.  We hope that FemTechNet offers learning experiences that compel participants to rethink how to learn and how to write again.”

“How do you scaffold new forms of reading and new forms of writing?” Balsamo asked.  The answer, she suggested, was that “you need traditional literacies with paragraph organization and appropriate grammar” for “media-rich, argument construction,” but you also have to be prepared to make “the opening move for someone who wants to be able to take on more complex media along with more complex ideas.”

Balsamo also hopes that the project will “nudge researchers in the digital media and learning community to engage more with the different demographics of self-directed learners, who are not defined by K-12 school levels.  How are different groups of learners to be addressed?  What are their needs?  For example:  those who are over the age of thirty might require more advanced ways to relate their own life experiences to the resources available from academic research communities.  They will also need to be brought into new technological literacies and taught how to learn new technologies; their life-spans are expanding, life expectancies are lengthening, older learners (and now I’m talking about those 40 and older perhaps) need to learn how and why it is important to keep current on new developments in technologies of thinking and knowing.”  It’s not just content that keeps changing, but also ways of learning, of knowing, of communicating, of keeping abreast of changes in the world.  She reminds us that “these are the kinds of challenges with which medicine, engineering, and other science-based professions” are already grappling with, because those fields have had to figure out how to educate students when the experts know that the field’s “knowledge base is outdated three years after graduation.”

“I think this course will be interesting to informal and self-directed learners as well as to more traditional college students,” Balsamo said.  “I don’t see a relevant interest for students at the K-12 levels because the material we will focus on is more theoretical and culturally advanced than is typically presented at those levels.”   Balsamo cautioned against “trending downward” in the digital media and learning community, which, she notes, is often solely focused on learning among K-12 students or early college undergraduates.  “I think there are many domains of specialized knowledge that would benefit from experiments in modes of presentation and engagement.  How do we take some of the lessons learned from digital media and learning projects (that often focus on children) and use them to inform our efforts to engage more advanced thinkers and topics such as to focus on higher-order theorizing for example?  This kind of knowledge — especially among feminists — is hard-won and absolutely critical to the future reproduction of cultures.  It is a knowledge that is created by the subordinate, the oppressed, the debased, the subjugated, those subjects who have developed doubled and tripled consciousnesses.”

As Balsamo explained, “FemTechNet is about preserving, archiving and reproducing the most sophisticated knowledges produced by feminist thinkers in the past thirty years.  It creates a context for understanding the emergence of a phenomenon such as Riot Grrrls.  It reminds everyone of the many conversations that have been deepened by the engagement of feminist thinkers — there is no domain more crucial than those that deal with topics of technology and science.  Feminist thinkers have been at the forefront of the most radical rethinking of science and technology — as modes of knowledge creation and as human practices — for the past 30 years.  People need to know this history and learn its insights.”  In expressing her hopes to “incubate a paradigm shift,” Balsamo defined the intersections of the fields of feminist theory and technology studies as similarly constituted by “critical discussions and debates and differences of paradigm or worldview not just opinion.”

Despite her optimism about pursuing the broadest possible participation in the most radically open curricula, she acknowledged that the group would also have to be ready for “bad actors” including “trolls” and “people calling other people Feminazis.”

“This will be a good lesson for all feminist-inclined participants:  how do you engage in these spaces when there might be various levels of community response?  Do we educate, ignore, or apply draconian measures like tracking down addresses or inserting blocking mechanisms?”

“Bad actors are part of the scene of our digital life,” Balsamo reminds us.  “They actually provide teachable moments in the best case scenarios.”  She was already planning to have an advisory group watching the fora and hoping to recruit “noble teachers, so that the most calm and experienced people will be alerted, who have the responsibility to defuse or redress situations that could explode or swamp discussion.”

Balsamo insisted that it was important to recognize that failure and learning are intimately connected:  “failure is an absolutely necessary part of the learning experience.”  The ability to learn from failure — and to help students learn how to learn from failure — is a teacher’s highest responsibility, she claimed, both online and in the face-to-face learning environment where the courses will be piloted.  “One of the features that learning online needs to replicate from the traditional classroom is the recognition of the social contract between student and teacher; students have to trust teacher to create a space of learning will be safe enough for failure.”  Classroom errors cannot have “life or death consequences” so that students can fumble and take risks.   After all, she noted, “the things I say in the classroom shouldn’t haunt me for the rest of my life.”  Unfortunately, she argued, “the Internet doesn’t forget easily,” and “kids get into situations where they really don’t know if the online space will forget their newbie errors.”

According to Balsamo, these responsibilities — to teach students how to learn from failure and to create a space that is safe for risk-taking and mistake making — have been left out of most discussions that trumpet the value of “participatory learning, leveling authority, sharing authority, and flattening hierarchies of expertise.”  She said, “I want to assert — as would many feminist thinkers — that such responsibilities cannot be simply flattened or wished away.”  This rests on a nuanced understanding about the difference between institutionalized hierarchies and moral responsibilities; it rests on an understanding of the need to “unpack privilege” while steadfastly maintaining accountability for one’s participation in social life.

She describes, for example, those teachers who assign Wikipedia-editing exercises, who understand the need for students to submit prototypes before submitting actual edited material.  It is not useful for all students — especially those who have already been less validated as a knowledge producer to be exposed to the harshness of the unvarnished truthiness of the online world.

“How will failure be managed in this feminist project?  How has failure been considered in light of traditional feminist processes such as consciousness raising?  In these situations, feminists raise topics that are deeply political, excruciatingly personal, and dogged by a long history of  ‘you can’t talk about these things.’”  Balsamo wonders how failure might be productively incorporated into the FemTechNet project.  “I don’t know what kind of conversations will emerge; I also can’t absolutely guarantee that the digital space we create will be totally safe for these kind of conversations.  Perhaps by having lots of people watching, reading, and participating — by creating a global network of feminist participation — those who have the skills to manage and guide failure will outnumber those who try to make it unsafe.”