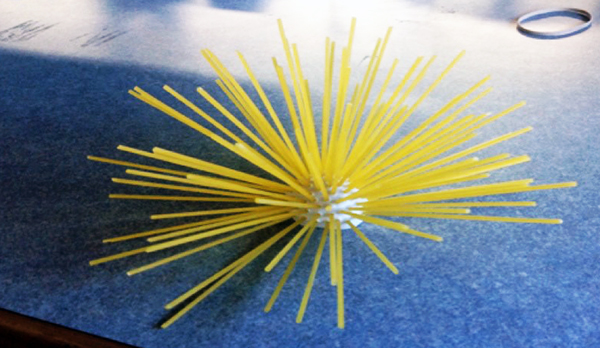 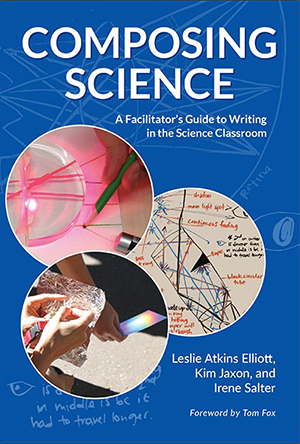 For the past few years, we have been fortunate to work together in a scientific inquiry class. Bringing together science faculty and composition faculty makes for some lively conversations about the teaching of writing. The course is offered to future elementary school teachers who are typically non-science majors. We recently co-wrote with Irene Salter Composing Science: A Facilitator’s Guide to Writing in the Science Classroom (TCPress 2016), which describes our work with these future teachers and our practices for teaching writing in science. The book lays out how we engage students in practices that mirror the work that writing plays in the development and dissemination of scientific ideas, as opposed to replicating the polished academic writing of research scientists.

Since writing the book, Leslie and I have turned our attention to students’ multimodal productions: artifacts that students make as a way to develop, test, refine and represent their scientific ideas. By examining students’ artifacts, our goals are 1) to extend definitions of composing, what “counts” as a text and its functions, and 2) to interrogate the frameworks provided by making and maker culture, moving from maker as identity to making as making meaning.

Often, when educators talk about the benefits of introducing maker culture in schools, they point to a range of practices and dispositions that making encourages: maker spaces encourage play, design thinking, experimentation, iteration, failure, and collaboration (Halverson & Sheridan, 2014; Hatch, 2013). While we see evidence of these structures and ways of being in our classroom and students, our students’ artifacts are not just “maker” stuff — like making rockets in hands-on science labs or students tinkering with available materials to see what happens — but making as woven into the ways in which ideas are developed, extended, and circulated in our class community. 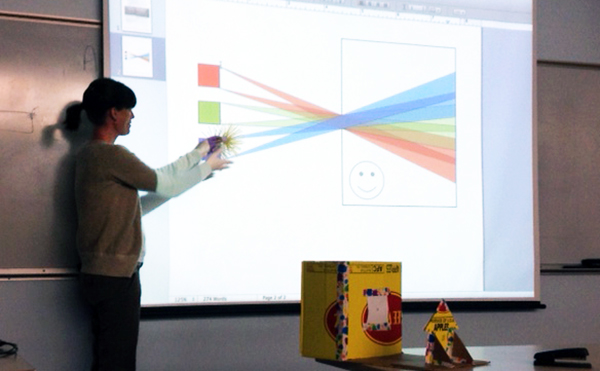 We are interested, in particular, in our students’ impulse to make artifacts as a way to represent their emerging scientific ideas. One example of these artifacts is Daniel’s ping-pong ball and spaghetti representation of the reflection of light rays. Daniel, and other students in our course, describe feeling “compelled” to go home and make as a way to understand science and also as a means to share nascent scientific ideas with peers. We see students’ artifacts as emergent ideas — emerging as you play with and repurpose materials so they tell your stories and are imbued with your meaning (ala William Gaver’s “ludic design”) — and seek to understand the affordances offered by the everyday materials students use, what Leslie calls “hackable materials.” We see the artifacts, and the conditions that afford the production of artifacts, as a way for students to participate in the meaning making and course content creation. Daniel’s artifact is one of many in our class that are taken up as a way to do science instead of simply following along in order to learn about known ideas. The artifacts become the center of conversations and debates; they are student idea-made material.

In the design of structures and activities in the scientific inquiry course, we pay particular attention to the ways in which multimodal composing — informal science notebooks, diagrams on whiteboards, images shared online, and conversations around these inscriptions — model and reflect the composing practices of scientists. In doing so, we are interested in how students are developing as “science writers” (that is, attending to whether students are adopting the specific practices that scientists use to construct texts), rather than focusing on improving students’ “science writing” (that is, attending to pieces of writing as evidence for improvement). This distinction is important, one that composition scholars have long given focus: support the growth of the writer as a way of improving the writing.

Certainly, we would not have to look at very many examples of scientists at work to see evidence of the multimodal ways in which they think through ideas and compose: scientists diagram, map, keep notebooks, use graphs and images, and generally cover whiteboards with nascent and developed ideas. As Latour found: when scientists were unable to access their graphs, they “hesitated, stuttered, and talked nonsense” and were only able to resume the conversation when a graph was scribbled onto whatever scrap of paper was at hand.

But, too often, when we ask students to write in science courses in school, we give priority to text-only or extended prose. Sadly, this is often paired with templates and lab report guidelines that are a distant cousin to the composing practices and products of scientists. We prioritize text-only and template driven writing instruction despite our understanding that most fields produce texts that are heavily multimodal. In fact, recently, we worked with faculty from a respected geology department. In conversations about the writing in their discipline, one geologist shared, “I could care less about the text; show me the map.” The geologists were trying to make sense of a campus writing policy that lists word count requirements. In the context of a discipline like geology that works heavily with charts, maps, and images, a word count is problematic. In order to support students as they learn to write in their respective fields, we must broaden our definitions of what counts as a text or we are simply asking students to write for school and not for their disciplines.

Jody Shipka, in “Negotiating Rhetorical, Material, Methodological and Technological Difference: Evaluating Multimodal Design,” offers a response to the ways in which we often get in the way of writers in the name of support:

If we are committed to providing students with opportunities to forge new connections, to work in new ways, to produce new kinds of texts, and to become increasingly cognizant of the ways texts provide shape for and take shape from the contexts in which they are produced, circulated, valued, and responded to, I think it is crucial that we take care not to limit the texts, tools, and composing strategies students might employ and alter in compelling ways.

Like Shipka’s students, our students often create reifications of science ideas — using a range of materials: Jell-O, lenses, maglites, spray paint, ping pong balls, dried spaghetti, and cereal boxes — without prompting from an assignment. These artifacts often appear in class on Mondays, after students have spent the weekend working to find a way to model their ideas for their peers. The impromptu artifacts remind us of the possibilities for constructing meaning when we create a space where students’ language is taken up as real work; they want their work to be understood by their colleagues.

Unfortunately, in a typical science course, student’s rights to their ideas run counter to the usual practices of science instruction. The typical problem set and lab report asks that students use canonical ideas in predetermined ways to reach known solutions. The fact that there is “a” solution set suggests that the ideal text exists and it is a student’s job to find it, usually by mimicking similar worked examples. In order for science faculty to employ the instructional practices that composition scholars recommend, science educators must also support students’ rights to their own texts and allow students to construct meaning in ways that make sense to them: from hacking materials in order to construct multimodal and artifact-driven texts to constructing terms that become part of the discourse community of the class.

By offering up a space where students compose their own texts as they construct scientific ideas and engaging with those ideas in scientific ways — through investigations described in lab notebooks, conversations captured on whiteboards, debates that force questions of precisely defined terms, the creation of artifacts — we find that students come to employ sophisticated writing practices in the service of scientific inquiry. Rather than fixing the content or structure of students’ writing, it is through engaging with their ideas that we can support the development of students as scientific writers.