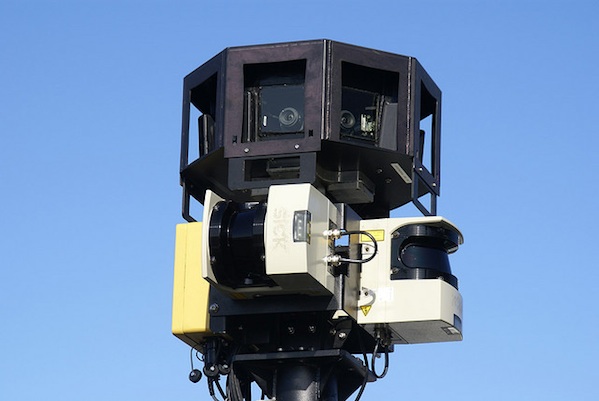 Digital maps allow us to map our journeys across times and places, linking virtual information to physical locations. What do digital maps teach us about how to see the world and our place in it and what kinds of navigations do they make possible? What opportunities do digital maps offer for mapping our learning journeys across school, home and other spaces and times?

What do digital maps teach us about the world?

In A History of the World in Twelve Maps, Jerry Brotton traces the history of human civilisations through the maps they produced, showing how maps tell us as much about how their makers see the world as they do the spaces they represent. The earliest known map of the world is a carved clay tablet found in Iraq showing the city of Babylon at the centre, surrounded by sea and then by mythical objects. The centre of this Mesopotamian civilisation is placed literally and figuratively at the centre of the whole world, with increasing danger and mystery towards the periphery. Early Christian maps, such as the 13th Century Hereford Mappa Mundi, similarly represented their cultural and political orientation to the world, with Jerusalem at the centre and East at the top of the map. These historical maps, so different from the conventions we are familiar with, reveal the cartographer’s perspective on the world, and are far from neutral, objective representations of reality. Decisions about what information to include and what to leave out, decisions about orientation, labelling and how to visually represent information mean that maps always represent a necessarily partial and simplified version of the world.

But as well as reflecting the views of those who make them, a map is a pedagogic resource that teaches its readers how to see the world and our place in it. For example, historians show that the British Imperial government’s use of maps in the 19th century was part of an attempt to construct, communicate and demonstrate order and control of territory.

The age of colonial expansion and exploration may be over but this is far from meaning there is nothing left to map. Google is constantly adding to its maps – sending planes over cities and backpackers off-road to capture ever more detailed images with which to populate its maps. The aim is not just to provide greater detail of physical features but to map all kinds of virtual information according to location, including shopping, historical sites, and political campaigns. All of this information allows us to search for location-relevant information, but from the map providers’ view, its most important function is that it allows them to better target advertising and other commercial content to us.

While companies like Google are actively generating new information such as images for their maps and many organisations are involved in linking existing data to location through digital maps, perhaps the greatest source of new mappable information comes from map users themselves. As we post geo-tagged tweets and instagram images, add placemarks to online maps and allow our interactions and movements to be tracked through our smartphones, we are deliberately and implicitly feeding in huge amounts of data that can be used to create all kinds of maps, from maps of happiness to maps of zombies.

Developing a digital sense of place

All this data that we produce is valuable to organisations like Google because it allows them, through a process of aggregation, to detect patterns of behaviour that help them better contextualise the information, and of course adverts, we see when we search for information in a location context. What we see when we load a map is thus informed by people’s patterns of behaviour in particular locations. This means that the kinds of information that get represented may well vary depending on the demographics – and their associated patterns of interaction – in particular locations providing the data. For example, if a population are not being tracked because they do not own smartphones, or because they are not using English language, or are using services under the radar of those doing the tracking, they will be left off the map. This can be seen in maps of user-generated geo-tagged data, in which large regions of Africa appear as ‘terra incognita’, but it also means that even in areas well-represented by user-generated data there will be some groups – including homeless people, young children and speakers of minority languages – whose experience is not mapped.

The aggregate of all the geo-tagged data about a particular place is described by Mark Graham and Matthew Zook as amounting to a digital overlay of the physical world they call a cyberscape. It can be tempting to treat cyberscapes as mirrors of the offline world, but because they rely on very uneven data, and filter for relevance where there is a high volume of data, they offer only partial and distorted pictures of the offline world. This partial picture of course reflects general inequalities in internet infrastructure as well as economic, political and social inequalities.

Like other maps, cyberscapes reflect particular cultural and political perspectives and influence how we see the world and our place in it, creating what Graham and Zook call ‘digiplaces’ – our sense of place becomes shaped by its corresponding digital layer of information. While cyberscapes, like all maps, are necessarily uneven and constructed versions of the world, as they become more closely integrated with our lived experience of place, there is a dangerous possibility that their logics are affirmed and reinforced in those places.

A cyberscape is the totality of digital information about a place, but what we actually see when we load, say, a Google map, is a particular selection of that information, the results of a Google algorithm that makes decisions about what is most relevant in that location, including the commercial and advertising content we see. While many are happy enough with the idea of being shown adverts in return for a free and useful service, how do these commercialised digital landscapes come to affect our sense of place – what kinds of ‘digiplaces’ do they create?

Another example with interesting implications for how digital maps inform our sense of place is the current initiative in the UK to map crime data. Users can compare the frequency and type of crimes at street level, and will also be able to see mug shots and sentences of convicted criminals. One of the effects of this will be to designate some locations as ‘more criminal’ or ‘at higher risk’ than others – and by implication also those who live and work in those areas. This example highlights in quite a stark way how maps might colour our perception of particular areas, and also how choices about what information is made visible and what is not have effects – with information outside the criminal justice system such as community initiatives and urban planning responses to crime invisible on these maps.

What kinds of navigations are made possible by digital maps?

As well as questions about how cyberscapes inform our sense of place, there are also questions about what kinds of navigations different sorts of maps make possible and what kinds of maps we can make of our learning journeys. Satellite navigation maps instantly plot the most efficient route from our current location to our destination. In the process, all mapped information is orientated relative to our individual location and destination, stripping out unnecessary detail to provide only the most relevant information, such as when to make a left or right turn. In some maps, advertising particular fuel stations, restaurants or coffee shops is also part of this essential information in a commercialised navigation.

What are the implications of relying on maps that are deeply contextualised around the individual and their destination? For one thing, if the map fails to direct you to your destination, it is difficult to then re-locate yourself in a wider landscape, as anyone who has ever got lost when relying on a sat-nav can tell you. But what might it mean to rely more generally on maps so tightly focused on an individual purpose? While sat-nav maps may provide the most efficient route to a destination, more widely contextualised maps enable us to plot multiple different routes across a space, provide opportunities to take detours along the way and to identify new destinations we haven’t yet visited. In contrast to the single ‘most efficient’ route presented by a sat nav model, some journeys may encode different kinds of engagement with space. For example, when my mother was travelling 40 miles daily to hospital for intense and tiring treatments, the walk between the train station and hospital was crowded, dirty and noisy and unwelcoming for pedestrians. She began to search out alternative routes between and behind the main buildings and roads that would allow her to pause in green spaces, that made a welcoming space and that resisted the efficient brutality of the hospital architecture, rewriting her relationship with the space and creating new navigations with new meanings. The logic of the sat-nav map implies a single, most efficient route, but the logic of learning is to keep open the possibility of exploration, productive detours, multiple paths and the writing of new journeys with new meanings. With the possibility of digitally mapping all kinds of information about our learning in different spaces, we need to think about what sorts of maps we want to navigate by.

The thing about digital maps is that we do not have to only use those maps that are given to us, we can create our own. We are already producing a cyberscape through our digital engagement with places and OpenStreetMap, the ‘Wikipedia’ of maps, is producing a crowdsourced map of the globe, open to all. If maps help to construct how we see the world, our place in it and the possible navigations across it, what kinds of worlds are we producing through feeding our data into cyberscapes and what kinds of navigation are we making possible? And how could we build the logics of learning, of different kinds of engagement with place, into the maps that we are making?