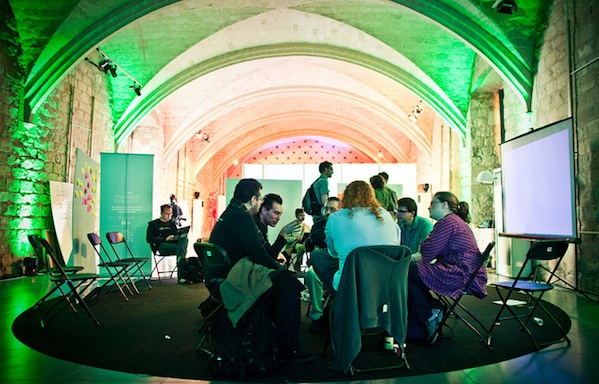 What if the same energy, ideals, organizational effectiveness, global army of volunteers and code wizardry that created the Firefox web browser could be applied to learning and education? Don’t forget that the Mozilla Foundation is all about maintaining the openness and generativity of the Web. Mark Surman, executive director of the Mozilla Foundation, told me recently “we need to do more than make a browser” for Mozilla to advance its larger goals. I asked him why Mozilla decided to turn its attention and formidable energies to education and learning. “We looked at each other,” Surman said, “and asked ourselves who kinda looks like the people who made Firefox?” Which is what brought Mozilla’s attention to the kinds of efforts represented here on DMLcentral. Open educational resources, intelligent use of media creation, gaming, social media in encouraging collaborative, peer-to-peer learning — all fit closely with both open Web goals and open source production methods. Drumbeat was the name of the get-together organized by Mozilla in Barcelona last November, and it’s the name of the online smartmob that’s putting open-source principles and methods together with new kinds of learning media and methods.

“Learning, Freedom, and the Web” was the motto of the festival and remains the slogan of the ongoing movement. Like Firefox, Drumbeat is not just open — it depends on the contributions of volunteers and collaborators. Among the projects cooked up at Drumbeat’s face-to-face festival and continue online is Hackosaurus: “a set of tools that we are developing to allow teenagers to easily inspect, remix and redesign the Web. Currently we are thinking of the project as a scaffolded experience, where teens have the opportunity to engage with the Web by hanging out, messing around and geeking out. This experience is based on the work done by Mizuko Ito et al. in the ethnographic study, Kids’ Informal Learning with Digital Media.” Or, as Surman put it in our interview, “What if we could make the entire Web into a programming language that kids can play with?”

Other ongoing Drumbeat projects include:

For the first 3 1/2 minutes of the video, Surman talks about Mozilla’s broad goals for an open Net, and how they decided that digital media and learning practitioners were an ideal community for Mozilla’s efforts “beyond Firefox.” Surman then makes an intriguing comparison between assessment in learning and the kind of peer assessment that produced Firefox code.

In the final moments of our interview, Surman talks about how Mozilla will continue to “stand up for user freedom and user choice in the core technologies where people interface with the web.” But browsers and the tools people use to make websites are not the only contested arenas in battles to keep the Web open, he adds. “It’s also really about identity, where your data is stored, about making sure that users’ information doesn’t get siloed, and about making sure that the mobile Web is built on the same standards as the Web had been.”

A netvibes dashboard can give you up-to-the-minute inflows from the Planet Drumbeat blog, Twitter search, Flickr favorites, the Drumbeat mailing list, RSS feeds from Drumbeat projects. Here’s the Drumbeat FAQ and here’s how to get involved.